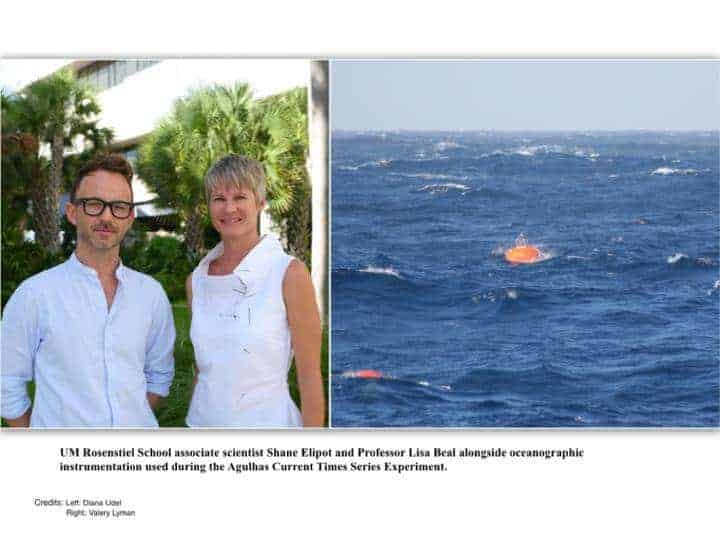 A new study by University of Miami (UM) Rosenstiel School of Marine and Atmospheric Science researchers found that the Indian Ocean’s Agulhas Current is getting wider rather than strengthening. The findings, which have important implications for global climate change, suggest that intensifying winds in the region may be increasing the turbulence of the current, rather than increasing its flow rate.

Using measurements collected during three scientific cruises to the Agulhas Current, the Indian Ocean’s version of the Gulf Stream, researchers estimated the long-term transport of the current leveraging 22 years of satellite data. They found the Agulhas Current has broadened, not strengthened, since the early 1990s, due to more turbulence from increased eddying and meandering.

One of the strongest currents in the world, the Agulhas Current flows along the east coast of South Africa, transporting warm, salty water away from the tropics toward the poles. The Agulhas, which is hundreds of kilometers long and over 2,000-meters deep, transports large amounts of ocean heat and is considered to have an influence not only on the regional climate of Africa, but on global climate as part of the ocean’s global overturning circulation.

“Changes in western boundary currents could exacerbate or mitigate future climate change,” said Lisa Beal, a UM Rosenstiel School professor of ocean sciences and lead author of the study. “Currently, western boundary current regions are warming at three times the rate of the rest of the world ocean and our research suggests this may be related to a broadening of these current systems.”

Previous studies have suggested that accelerated warming rates observed over western boundary current regions, together with ongoing strengthening and expansion of the global wind systems predicted by climate models relate to an intensification and pole-ward shift of western boundary currents as a result of man-made climate change.

“To find decades of broadening, rather than intensification, profoundly impacts our understanding of the Agulhas Current and its future role in climate change,” said study co-author Shane Elipot, a UM Rosenstiel School associate scientist. “Increased eddying and meandering could act to decrease poleward heat transport, while increasing coastal upwelling and the exchange of pollutants and larvae across the current from the coast to the open ocean.”