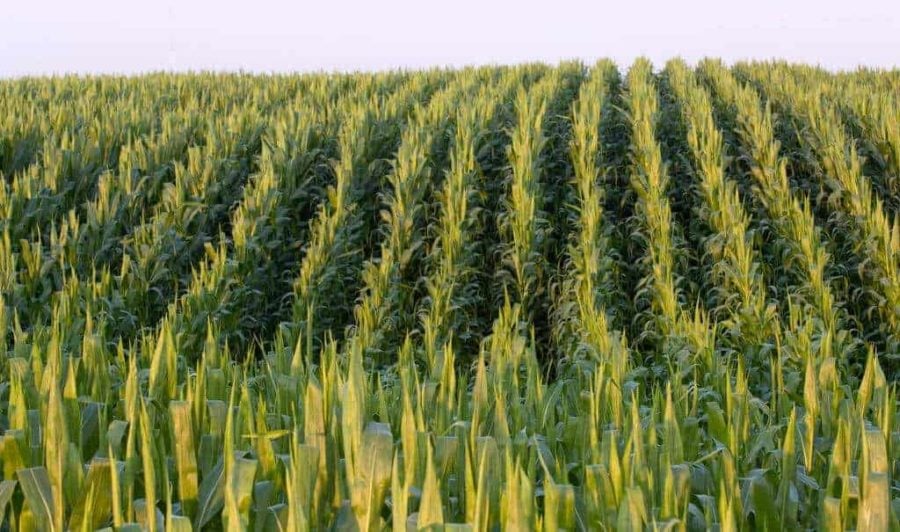 MSU soybean and corn fields at sunset in July, 2006.

There’s an old farmer’s tale that says, “On a quiet night you can hear the corn grow.” It may seem funny, but Douglas Cook at New York University and colleagues Roger Elmore and Justin McMechan, at the University of Nebraska, were able to use contact microphones to directly record the sounds of corn growing.

Corn is the leading grain crop in the U.S. with more than 350 million metric tons harvested yearly. But a lack of understanding about the mechanics involved in wind-induced corn stalk failure has hindered further improvements in corn production. Crop scientists have been working on this problem for more than 100 years, albeit with only marginal success.

Now, by applying mechanical engineering tools and techniques, a group of engineers and plant scientists led by Cook are making headway addressing this problem as well as discovering other issues related to plant growth and development.

So what does it sound like? “Surprisingly, it sounds remarkably similar to the sounds made when corn breaks,” Cook said. “We now think that plant growth involves millions of tiny breakage events, and that these breakage events trigger the plant to rush to ‘repair’ the broken regions. By continuously breaking and repairing, the plant is able to grow taller and taller.”

While the researchers haven’t yet determined whether this is true for all plants, Cook suggested that it may be a mechanism similar to that involved in muscle development: Lifting weights imparts tiny micro-tears in the muscle and, as these are repaired, the muscle is strengthened.

This intriguing finding is the result of the fusion of two seemingly unrelated disciplines: plant science and mechanical engineering.

“Many crops are lost each year due to wind damage,” Cook said. “Engineers know a lot about how to prevent structural failure, and by using natural breeding techniques plant scientists can improve virtually any feature of the plant that they can measure. So you can imagine that a great deal of progress in plant structural integrity can be achieved by these two disciplines working together.”

In terms of applications, “this is a very young field of research, so most of our work is still quite fundamental in nature,” Cook said. “We’re learning about plant growth and breakage, which could be useful to breeders when developing optimally designed plants.”

For example, they’ve learned that the leaves of corn plants actually provide the majority of structural support during periods of rapid growth. That’s quite amazing according to Cook — and not a role a leaf is typically expected to play. So it should help plant scientists start developing new varieties with tougher leaves that are less susceptible to failure during the growth phase.

Cook’s background is in human biomechanics, so he and colleagues are currently using computerized tomography (CT) technology to obtain 3-D images of plants.

“We also plan to use magnetic resonance imaging (MRI) technology to visualize corn growth and development,” Cook added. “We’d like to learn more about stalk failure — with a goal of identifying the ‘weakest link’ within the stalk failure process. Once it’s identified, plant scientists can try to improve stalk strength and resilience.”