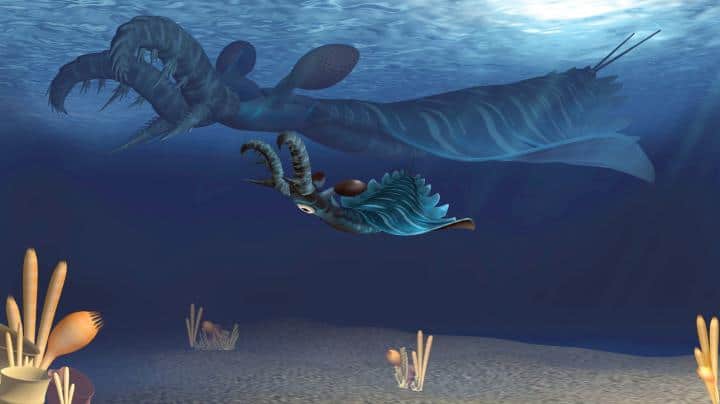 Some of the earliest predators that patrolled the oceans over 500 million years ago are also some of the largest animals to have lived at the time. However, a new fossil study led by Jianni Liu from the Northwest University of Xi’an in China, has shown that their tiny babies were also proficient killers.

The “creepy crawly” animal group known as the Arthropoda, which includes spiders, insects and crustaceans, has often been the inspiration behind many science fiction monsters, largely due to their scary-looking appendages. Some of the oldest and most primitive arthropod species belong to a group called the Radiodonta (“radiating teeth”), which were armed with large, spiny raptorial (or grasping) appendages at the front of the head and a circular mouth adorned with tooth-like serrations. These animals, including the famous Anomalocaris, are considered the giant apex predators of their time, reaching lengths of over one metre.

Until now, virtually nothing was known about the juveniles of radiodontans and their feeding habits. The discovery of an exceptionally-preserved juvenile of a species called Lyrarapax unguispinus from the early Cambrian (518 million-year-old) Chengjiang biota of China has shed new light on this iconic group of fossil arthropods.

At only 18mm in total body length, this almost complete specimen represents the smallest radiodontan ever found. To the surprise of the research team, its anatomy is extraordinarily well developed–especially the spiny grasping appendages–giving it the appearance of a miniaturised adult. This indicates that Lyrarapax unguispinus was a well-equipped predator at an early developmental stage, similar to modern arthropods such as praying mantises, mantis shrimps, and arachnids. This discovery confirms that raptorial feeding habits in juveniles appeared early on in the evolutionary history of arthropods.

This fossil find also has important implications for the rapid evolution of the first animals over half-a-billion years ago – an event referred to colloquially as the Cambrian ‘Explosion’. It is hypothesised that predation was a major driver of this evolutionary event, with predators placing selective pressures on animal communities, forcing prey species to adapt and evolve or face extinction.The predatory lifestyles of juvenile radiodontans adds further complexity to Cambrian marine food webs by placing additional pressures on small prey during this evolutionary ‘arms race’.