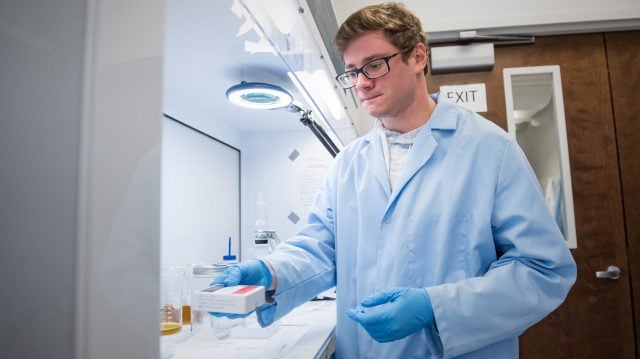 The world is awash in plastics, and a University of Mississippi professor’s research is exploring just how flooded waterways across the South are with tiny bits of these materials.

Only a fraction of that plastic is recycled, composted or combusted with energy recovery. Most of this plastic is sent to landfills or – even worse – tossed on the side of the road. Sunlight, water, wind and microorganisms slowly break down these plastics into microplastics, small plastic bits less than 5 millimeters long, or about the length of a mosquito.

Microplastics are everywhere, from the globe’s tallest peaks to the bottom of the oceans – even in municipal drinking water and floating through the air.

“These small plastic particles not only accumulate in the food chain but attract contaminants, including toxic heavy metals, persistent organic pollutants and pathogens,” said James Cizdziel, an associate professor in the Department of Chemistry and Biochemistry who joined the Ole Miss faculty in 2008.

“Rivers act as conduits for pollution, including microplastics, to coastal areas, where the majority of seafood stems from.”

On Tuesday (Oct. 15), Cizdziel will present his microplastic research as the topic of this month’s Oxford Science Cafe. The free talk, titled “Microplastic Pollution: What’s the BIG deal?” is set for 6 p.m. at Uptown Coffee in Oxford.

Cheap, life-saving and convenient, plastics were first developed in the 19th century and exploded in popularity and production during World War II and afterward.

The modern world is living in the age of plastics. From bottles, grocery bags and cigarette butts to medical devices, vehicles and even fleece jackets, plastics are universal.

The objectives of Cizdziel’s research are to systematically quantify the concentrations and loads of microplastics and characterize their shapes, size distribution and chemical composition in the Mississippi River system as well as at oyster reefs in the Mississippi Sound estuary.

While the problem is being studied elsewhere, Cizdziel’s research is focusing on smaller microplastics that typically can’t be seen with the naked eye, but instead require sophisticated analytical instrumentation. The research also is seeking to understand the interactions of mercury and microplastics – two global pollutants – and educate young scientists and the public on the emerging issue.

The information collected could help assess sources of the microplastics and guide agencies and policymakers in developing strategies to address this emerging contaminant, Cizdziel said. The research also is educating the next generation of environmental scientists with state-of-the-art instrumentation on a global problem.

“Many students are drawn to Dr. Cizdziel’s research on developing and applying novel analytical chemistry methods to understand and solve practical problems in the real world,” said Greg Tschumper, UM chair and professor of chemistry and biochemistry.

“His recent work on air pollution sampling with drones, examining forensic trace evidence from 3D-printed guns and now microplastics demonstrates that the outstanding chemistry research in our department extends beyond beakers and test tubes in a laboratory and into our daily lives – including the food we eat, the water we drink and the air we breathe.”

The collection teams tow nets behind boats to skim the surface waters of rivers to collect samples, but they’ve also developed something called a “one-pot” method. The process uses inexpensive canning jars and screens to collect and prepare water samples for microplastic analyses.

“The advantage of the one-pot method is that it minimizes contamination and losses by processing the sample in the same jar that the sample was collected in,” Cizdziel said. “We are submitting a paper on the method to the (journal) Environmental Science and Technology.”

So far, the research has uncovered a few preliminary findings when it comes to microplastics in the Mississippi River and Mississippi Sound, Cizdziel said.

A few of these findings include:

All these microplastics in water present a danger to aquatic organisms and perhaps even humans, though that exact link needs more study.

“The dangers to aquatic organisms, particularly smaller organisms and filter-feeders, include blocking digestive tracts, wasting energy on nonfood particles and reproductive problems,” Cizdziel said. “The dangers to organisms higher in the food chain and humans is certainly less, but has not been adequately studied.”

Cizdziel’s research is already gaining international attention, including the professor co-chairing a special session on microplastic pollution at the Society for Environmental Toxicology and Chemistry Europe 29th Annual Meeting in Helsinki in May. And chemistry graduate student Austin Scircle, of Powell, Tennessee, will be presenting on the microplastic research at the society’s North America 40th Annual Meeting in Toronto in November.

Cizdziel and his students also have submitted a microplastics-related paper to the Journal of Chemical Education and will soon submit another to Environmental Toxicology and Chemistry.

“Microplastics are a relatively new environmental and health concern, which means there are still many unknowns,” said Josh Gladden, UM vice chancellor for research and sponsored programs. “Dr. Cizdziel’s research will help answer some of those open questions and inform decisionmakers so they can craft wise policy.”