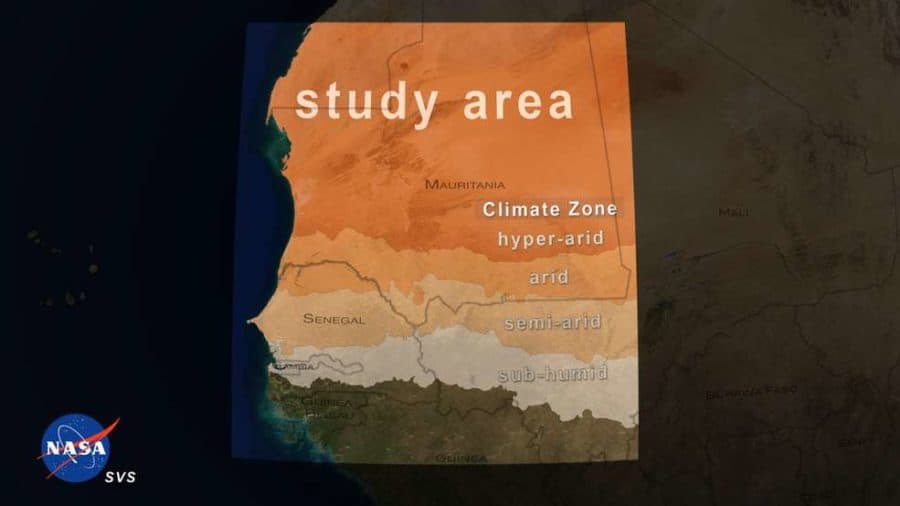 Scientists from NASA’s Goddard Space Flight Center in Greenbelt, Maryland, and international collaborators demonstrated a new method for mapping the location and size of trees growing outside of forests, discovering billions of trees in arid and semi-arid regions and laying the groundwork for more accurate global measurement of carbon storage on land.

Mapping non-forest trees at this level of detail would take months or years with traditional analysis methods, the team said, compared to a few weeks for this study. The use of very high-resolution imagery and powerful artificial intelligence represents a technology breakthrough for mapping and measuring these trees. This study is intended to be the first in a series of papers whose goal is not only to map non-forest trees across a wide area, but also to calculate how much carbon they store – vital information for understanding the Earth’s carbon cycle and how it is changing over time.

Carbon is one of the primary building blocks for all life on Earth, and this element circulates among the land, atmosphere, and oceans via the carbon cycle. Some natural processes and human activities release carbon into the atmosphere, while other processes draw it out of the atmosphere and store it on land or in the ocean. Trees and other green vegetation are carbon “sinks,” meaning they use carbon for growth and store it out of the atmosphere in their trunks, branches, leaves and roots. Human activities, like burning trees and fossil fuels or clearing forested land, release carbon into the atmosphere as carbon dioxide, and rising concentrations of atmospheric carbon dioxide are a main cause of climate change.

Conservation experts working to mitigate climate change and other environmental threats have targeted deforestation for years, but these efforts do not always include trees that grow outside forests, said Compton Tucker, senior biospheric scientist in the Earth Sciences Division at NASA Goddard. Not only could these trees be significant carbon sinks, but they also contribute to the ecosystems and economies of nearby human, animal and plant populations. However, many current methods for studying trees’ carbon content only include forests, not trees that grow individually or in small clusters.

Tucker and his NASA colleagues, together with an international team, used commercial satellite images from DigitalGlobe, which were high-resolution enough to spot individual trees and measure their crown size. The images came from the commercial QuickBird-2, GeoEye-1, WorldView-2, and WorldView-3 satellites. The team focused on the dryland regions – areas that receive less precipitation than what evaporates from plants each year – including the arid south side of the Sahara Desert, that stretches through the semi-arid Sahel Zone and into the humid sub-tropics of West Africa. By studying a variety of landscapes from few trees to nearly forested conditions, the team trained their computing algorithms to recognize trees across diverse terrain types, from deserts in the north to tree savannas in the south.

Learning on the job

The team ran a powerful computing algorithm called a fully convolutional neural network (“deep learning”) on the University of Illinois’ Blue Waters, one of the world’s fastest supercomputers. The team trained the model by manually marking nearly 90,000 individual trees across a variety of terrain, then allowing it to “learn” which shapes and shadows indicated the presence of trees.

The process of coding the training data took more than a year, said Martin Brandt, an assistant professor of geography at the University of Copenhagen and the study’s lead author. Brandt marked all 89,899 trees by himself and helped supervise training and running the model. Ankit Kariryaa of the University of Bremen led the development of the deep learning computer processing.

“In one kilometer of terrain, say it’s a desert, many times there are no trees, but the program wants to find a tree,” Brandt said. “It will find a stone, and think it’s a tree. Further south, it will find houses that look like trees. It sounds easy, you’d think – there’s a tree, why shouldn’t the model know it’s a tree? But the challenges come with this level of detail. The more detail there is, the more challenges come.”

“There are important ecological processes, not only inside, but outside forests too,” said Jesse Meyer, a programmer at NASA Goddard who led the processing on Blue Waters. “For preservation, restoration, climate change, and other purposes, data like these are very important to establish a baseline. In a year or two or ten, the study could be repeated with new data and compared to data from today, to see if efforts to revitalize and reduce deforestation are effective or not. It has quite practical implications.”

After gauging the program’s accuracy by comparing it to both manually coded data and field data from the region, the team ran the program across the full study area. The neural network identified more than 1.8 billion trees – surprising numbers for a region often assumed to support little vegetation, said Meyer and Tucker.

“Future papers in the series will build on the foundation of counting trees, extend the areas studied, and look ways to calculate their carbon content,” said Tucker. NASA missions like the Global Ecosystem Dynamics Investigation mission, or GEDI, and ICESat-2, or the Ice, Cloud, and Land Elevation Satellite-2, are already collecting data that will be used to measure the height and biomass of forests. In the future, combining these data sources with the power of artificial intelligence could open up new research possibilities.

“Our objective is to see how much carbon is in isolated trees in the vast arid and semi-arid portions of the world,” Tucker said. “Then we need to understand the mechanism which drives carbon storage in arid and semi-arid areas. Perhaps this information can be utilized to store more carbon in vegetation by taking more carbon dioxide out of the atmosphere.”

“From a carbon cycle perspective, these dry areas are not well mapped, in terms of what density of trees and carbon is there,” Brandt said. “It’s a white area on maps. These dry areas are basically masked out. This is because normal satellites just don’t see the trees – they see a forest, but if the tree is isolated, they can’t see it. Now we’re on the way to filling these white spots on the maps. And that’s quite exciting.”