A new normal is taking shape as a warming planet is changing hurricane behaviors and patterns. Research over the last decade has shown alarming trends resulting in more destructive hurricanes. Global trends suggest hurricanes are getting stronger, moving more slowly over land, and deviating farther north and south of the equator.

With these changes come stronger winds, increased flooding, and risks posed to cities that historically have not been hit by these types of storms.

Also known as tropical cyclones or typhoons, hurricanes are low-pressure storm systems that form over warm ocean water and can strengthen to massive sizes, bringing with them heavy rain, intense wind and storm surges. They can even spawn tornadoes. 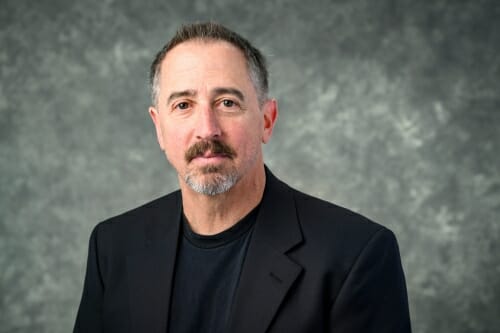 James Kossin has been studying hurricane patterns for more than 30 years as a researcher with the National Oceanic and Atmospheric Administration’s National Centers for Environmental Information who is based at the University of Wisconsin–Madison Cooperative Institute for Meteorological Satellite Studies.

Kossin’s latest research, published in May 2020 in the Proceedings of the National Academy of Sciences, examined more than 40 years of hurricane data captured by weather satellites from 1979 to 2017. His analysis revealed an increasing trend of higher maximum sustained winds in hurricanes.

In short, hurricanes have gotten stronger.

“What we’re finding globally is about six percent per decade of change,” says Kossin. “If you have a hurricane, there is an increased chance of it being at major hurricane intensity compared to storms in past decades.”

Hurricanes begin their lifecycle as smaller tropical depressions but are not classified as a major hurricane until wind speeds exceed 111 mph. Kossin’s work suggests hurricanes globally are now about 25 percent more likely to achieve or exceed this maximum sustained wind speed threshold compared to 40 years ago.

Kossin’s hurricane intensification research adds to a growing body of work on other hurricane attributes that are affected by a warmer planet, like hurricane slowdown and migration. While high winds due to intensification pose serious risks to cities and its residents, the flooding caused by hurricanes is their deadliest impact.

In a related paper published in Nature in 2018, Kossin compared 68 years (1949-2016) of worldwide hurricane track and intensity data, known as best-track data, from NOAA and other agencies to identify changes in forward translation speeds — the speed at which a hurricane moves. Kossin found that, worldwide, hurricane translational speeds have slowed down by an average of 10 percent.

In 2017, Hurricane Harvey spent several days over Houston, Texas, dousing the city and surrounding areas with more than 50 inches of rainfall. Similarly, in 2020, Hurricane Sally inundated states like Florida, Mississippi and Alabama when the storm stalled because it lacked a high-pressure system to push it back into the North Atlantic Ocean.

The slowing hurricanes are likely the result of high- and low-pressure systems becoming more balanced. A warming planet smooths out differences between the two pressure systems resulting in less forceful movements needed to push hurricanes along. Additionally, a warmer atmosphere holds more moisture, allowing for an already saturated storm like a hurricane to carry more water and drop it over land. Roughly, a one-degree Celsius difference in atmospheric temperatures translates to an atmosphere that can hold seven percent more moisture.

The reductions in translational speeds, however, are not the same everywhere. There are four distinct hurricane regions around the globe and each one is experiencing different rates of slowing. Over the past 68 years, the North Atlantic Region has seen a slowdown of six percent, while the Western North Pacific Region, an area that includes southeast Asia, has experienced a slowdown of 20 percent, the most significant of all of the regions. Kossin identified a reduction of 15 percent for the nearby Australian Region and the U.S. has seen a slowdown of 17 percent since 1900.

Although Hurricane Harvey’s and Florence’s behaviors are not directly attributable to climate change, Kossin says storms like these are examples of the increased risks cities face when storms slow down.

Most hurricanes form and are sustained in warm ocean waters of 80–89 degrees Fahrenheit. Those warm temperatures are typically found within an area north and south of the equator. Kossin’s research from a 2014 paper in Nature identified a trend of hurricanes traveling beyond their usual ranges — reaching farther north and south.

Referred to as poleward migration, the analysis was based on 30 years of hurricane data and looked at where the storms reached their maximum sustained winds. Over those three decades, Kossin identified a shift of 32 miles per decade in the northern hemisphere, and 38 miles per decade in the southern hemisphere. The study further breaks down specific hurricane regions like the North Atlantic and the Western North Pacific.

“This can have huge impacts to cities that are not used to seeing these types of storms hit their shores,” says Kossin. “Since the research came out in 2014, we continued to look at these trends and we now have a medium confidence that the polar migration in the Western North Pacific Ocean has a human fingerprint on it.”

This means that anthropogenic climate change is in part causing these hurricanes to reach beyond their typical boundaries, at least in certain regions. Further, it indicates that ocean temperature increases are not the only forces driving hurricane development. A warming planet also interferes with global wind patterns.

As a hurricane travels farther north and south from the tropics, it encounters stronger vertical wind shear, which can distort the hurricane and weaken it. However, due to climate change, wind shear at certain latitudes is thought to be diminished, enabling the poleward shift.

Continuing to assess the impact of climate change on hurricanes will be instrumental to protecting communities most affected by these devastating storms. With each new year of hurricane data, Kossin has more observations to study and map out the trends — whether it’s hurricane strength or movement over time. To date, his research results raise concerns.

“It’s becoming increasingly clear that tropical cyclone behavior is changing in very dangerous ways all across the globe as the planet warms,” says Kossin.

This work is supported by NOAA.