Access to clean water is a pressing issue for many people around the world. Even in areas with ample water resources, a lack of infrastructure or reliable energy means purifying that water is sometimes extremely difficult.

That’s why a water vapor condenser designed by University of Wisconsin–Madison engineers could be revolutionary. Unlike other radiative vapor condensers which can only operate at night, the new design works in direct sunlight and requires no energy input.

“Water sustainability is a global issue,” says Zongfu Yu, an associate professor of electrical and computer engineering at UW–Madison. “You can’t set out to solve the water problem without addressing energy.”

Yu, with University at Buffalo Professor Qiaoqiang Gan and their students, described the new radiative vapor condenser this week in the journal Proceedings of the National Academy of Sciences.

The idea of radiative cooling is not new. In fact, it’s used in nature by insects like the darkling beetle found in the Namib Desert in southwest Africa. During clear nights when ambient temperatures are cool, darkling beetle shells shed extra heat in the mid-infrared range, also known as the atmospheric-transparency window. That heat naturally radiates toward the cool upper atmosphere of Earth and the chilly void of space.

This heat loss lowers the beetle’s temperature below the dew point, or the temperature at which water vapor in the air condenses into droplets on cooler surfaces (think of a glass of iced tea on a hot day). The beetle is then able to harvest that water, using special grooves and structures to direct the moisture toward its mouth. 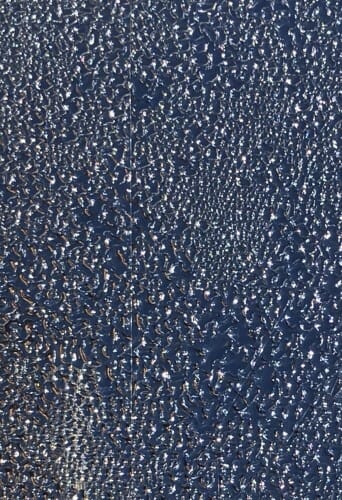 Water condensed from air beads on the surface of a new water vapor condenser designed by UW–Madison engineers. PHOTO COURTESY OF THE PHOTONICS LAB AT UW–MADISON

Over the last few decades, researchers have designed dew collectors based on the same principle, using special materials that efficiently shed heat like the beetle shell does. The problem is that those collectors only work at night since sunlight produces more heat than the materials can give off.

In this project, the team, led by UW–Madison postdoctoral researcher Ming Zhou and supported by the National Science Foundation, constructed a small vapor condenser using a thin film of material called polydimethylsiloxane, which is very efficient at releasing thermal radiation in the atmospheric-transparency window. They layered that over silver, which reflects sunlight. The combination of the two is able to cool the condenser below the dew point, leading to condensation.

Zhou tested the device by placing it inside a condensation chamber alongside chambers containing a commercially available dew-collecting material as well as a simple “black body,” an object used for experimental comparisons because of the consistent way it absorbs and emits radiation. The team pumped humidified air into the three chambers, which they positioned on top of a UW–Madison building and, during another test, a parking garage. The polydimethylsiloxane was the only material that condensed water vapor while in direct sunlight.

“Fundamentally, our radiative condenser is engineered to be in ‘thermal contact’ with the vast cold reservoir in the upper atmosphere and in outer space,” says co-author Mikhail Kats, a UW–Madison electrical and computer engineering associate professor and expert on managing infrared radiation. “The cooling power obtained via this thermal contact enables daytime water condensation with no need for an external power source.”

Another benefit is that polydimethylsiloxane is widely available and relatively cheap, and the silver backing is not necessary for the condenser to work. 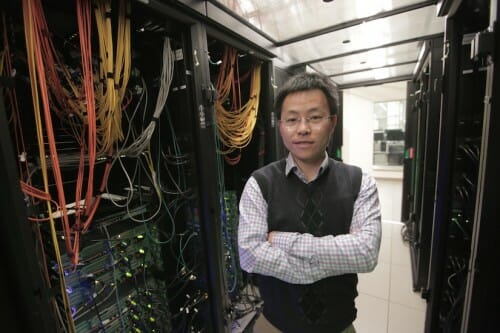 “Water sustainability is a global issue,” says Zongfu Yu, an associate professor of electrical and computer engineering at UW–Madison. “You can’t set out to solve the water problem without addressing energy.” COURTESY OF UW–MADISON COLLEGE OF ENGINEERING

“The cost and availability of materials has been the barrier for this type of application. But that’s not the case in our system, which is much closer to reality,” says Gan.

Yu and Gan are hoping to commercialize the condenser through their company Sunny Clean Water LLC by pairing it with another passive process they’ve researched, solar vapor generation. Their idea is to create a system in which untreated water or even sea water is vaporized, then run it through the condenser to purify it using the sun as the only energy source.

Eventually, the team hopes the system is efficient enough to produce water directly from the air. It’s a process they are working to optimize.

“This experiment was done using some controlled water vapor,” says Yu. “Now, the next step is to pull the water directly out of the air. That’s very, very exciting to us—to get water from the air for free using no energy.”

Other UW–Madison authors include electrical and computer engineering professor Zhenqiang Ma, and students Alireza Shahsafi, Yurui Qu and Zhenyang Xia. Haomin Song of the University at Buffalo, Xingyu Xu of Tsinghua University, Jia Zhu of Nanjing University and Boon Ooi of King Abdullah University of Science and Technology also contributed to the paper.