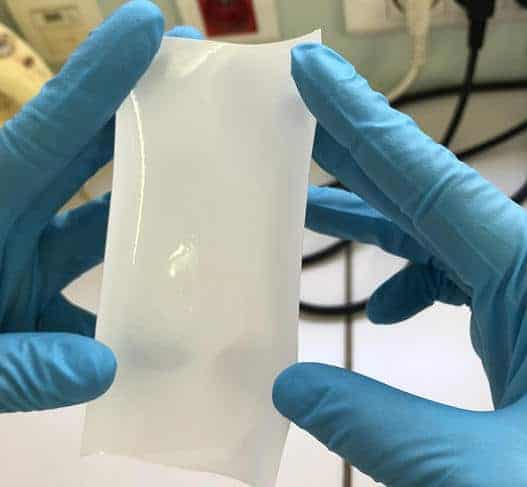 More than 2.2 billion people – one in three on the planet – have no access to clean water. Given the rapid growth in world population and economic activity set against a backdrop of climate change, many countries will require urgent solutions. One attractive option is to desalinate seawater. To achieve this, the past fifty years have seen the development of membrane filters that allow water molecules to pass through but reject the ions that make up salt. However, their performance so far has not been sufficient to obtain anything other than highly energy-intensive solutions that are themselves contributing to climate change. The hybrid membrane that we1 have developed2 could be a game-changer. Combining a polyamide matrix, already used by the desalination industry, with artificial water channels makes it possible to desalinate three times more water and use 12% less electricity than existing methods for every cubic metre of water processed.

Around 100 million cubic metres of water are desalinated worldwide every day, using several state-of-the-art technologies. Most of them are based on a process called osmosis, inspired by nature. A typical example of this is the spontaneous motion of water through the pores of a membrane separating two solutions with different concentrations of salt. The water moves from the less to the more concentrated one, diluting the latter and reducing the difference between the two. Conversely, to be desalinated, seawater has to be “pushed” in the opposite direction to its spontaneous motion, so as to obtain very different salt concentrations on either side of the membrane, even approaching or reaching zero on one side. To do this, the water must be subjected to high pressure, a method known as reverse osmosis under pressure.

The synthesis of these so-called “biomimetic” membranes, since they reproduce biological processes, has benefited from the constant progress of chemistry. It is now more than fifty years since the development of the first such devices for desalination by reverse osmosis. Produced as a thin layer of polyamide, their water permeability ranges from 1 to 1.5 litres per cubic metre per hour per bar, while their salt rejection rate is 99%. More recently, permeability has been improved with the production of membranes made up of polyamide thin films incorporating nanoparticles, although these have a lower salt rejection rate.

Other such surfaces developed over the last decade have imitated nature even more closely. They contain embedded proteins called aquaporins, which form channels that are permeable to water and reject ions. The discovery of aquaporins, which perform this task inside the membranes of biological cells, earned the American biologist Peter Agre the Nobel Prize in Chemistry in 2003. As a result, membrane permeability increased by some 30%, albeit with reduced ion selectivity (the salt rejection rate is only 97%). Most importantly, large-scale applications for hybrid polyamide-aquaporin membranes still need to overcome a number of drawbacks, such as the high cost of aquaporin production using biosynthesis, low stability, manufacturing constraints, the need for high pressure, and so on.

To enhance the performance of desalination membranes, aquaporins can be replaced by synthetic channels called artificial water channels (AWC),3 which have attracted increasing interest in the past ten years. For instance, we worked with so-called ‘I-quartet’ channels,4 which can be inserted into a lipid bilayer similar to the membranes in living cells. We discovered that in order to pass through these channels, the water molecules line up selectively in single file, forming what is known as water wires. Moreover, they are aligned in a very specific way, which can be explained by the water molecule’s polarity combined with the asymmetry of the channels themselves. Compared to a random configuration, this so-called chiral arrangement results in greater mobility of the molecules in the channels, thus facilitating the transport of matter, and requiring lower external energy input. 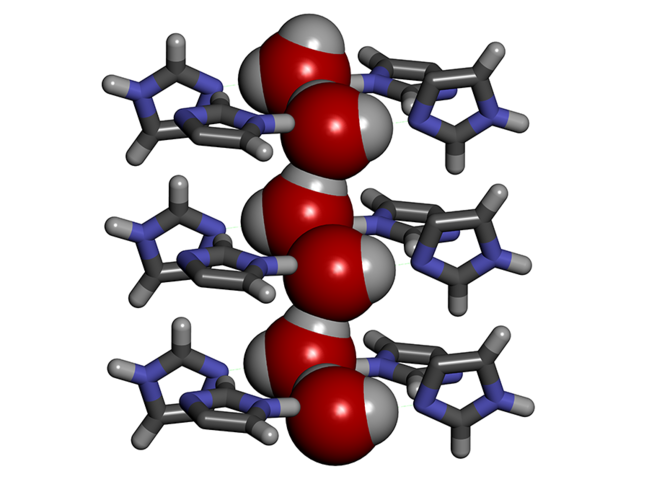 It soon became clear that artificial water channels appeared to provide a promising alternative. However, producing such biomimetic membranes on the metre scale turned out to be tricky. To achieve this, we therefore opted for a combination of AWCs with the original tried and tested polyamide. The challenge was to incorporate the AWCs smoothly without creating defects in the membrane. We managed it by improving the traditional polymerisation process used in the production of polyamide layers. This enabled us to obtain a hybrid AWC-polyamide structure in the form of a “super sponge”.

A patent application for this work was submitted in 2019, and these hybrid membranes are now being developed with several industrial partners. Their performance regarding permeability (3 litres per cubic metre per hour per bar) and salt rejection (exceeding 99.5%) makes it possible to reduce the energy bill by 12% for three times the amount of water produced, compared with existing methods, whose yields have remained the same over the past fifty years. This therefore represents a significant change of scale, as well as the opportunity to enhance the long-term stability of these materials, while reducing the size of desalination plants. These membranes might also facilitate the production of ultra-pure water required to manufacture vaccines and microelectronic components, without having to resort to costly ion-exchange processes that are highly sensitive to water hardness in some parts of the world. 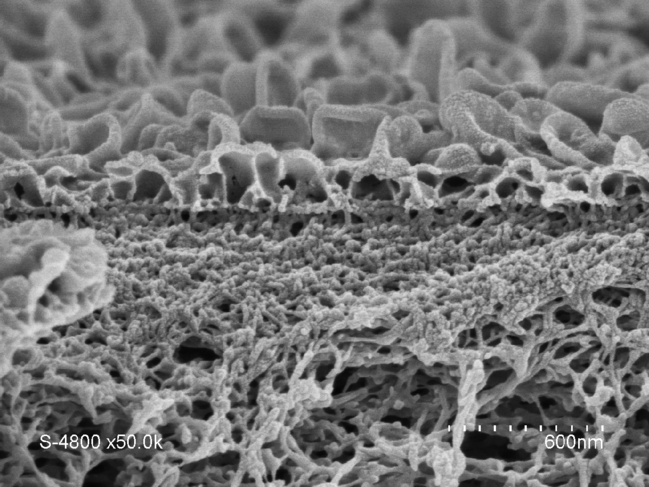 Understanding the selective flow of water in artificial channels bridges the gap between basic research and industrial applications. Astonishingly, these tiny nanometre-scale artificial channels (a nanometre is a millionth of a millimetre, or 10-9 metre!) make it possible to develop square-metre sized membranes, which can in turn produce millions of cubic metres of desalinated water per day. Such is the beauty of chemistry, which enables the creation of objects with hugely diverse applications, over a wide range of different scales.

The points of view, opinions and analyses published in this article are the sole responsibility of the author. In no way do they reflect the position of the CNRS.