Dwindling water supplies and a growing population will halve per capita water use in Jordan by the end of this century. Without intervention, few households in the arid nation will have access to even 40 liters (10.5 gallons) of piped water per person per day.

Low-income neighborhoods will be the hardest hit, with 91 percent of households receiving less than 40 liters daily for 11 consecutive months per year by 2100.

Those are among the sobering predictions of a peer-reviewed paper by an international team of 17 researchers published March 29 in Proceedings of the National Academy of Sciences.

Jordan’s deepening water crisis offers a glimpse of challenges that loom elsewhere as a result of climate change, population growth, intensifying water use, demographic shocks and heightened competition for water across boundaries, said study co-author and Stanford hydrologist Steve Gorelick, who directs the Global Freshwater Initiative at Stanford’s Woods Institute for the Environment. The World Health Organization estimates half of humanity may live in water-stressed areas by 2025, and the United Nations anticipates water scarcity could displace 700 million people by 2030. 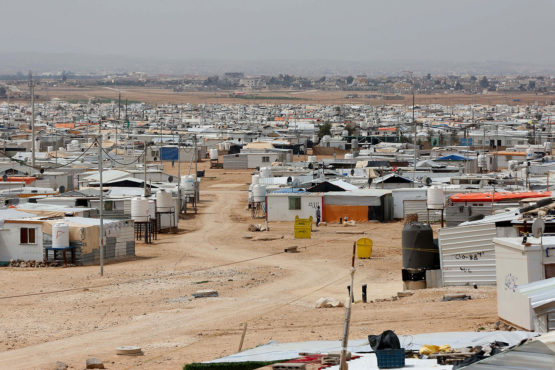 A view of the Za’atari Refugee Camp in Jordan, where nearly 80,000 Syrian refugees were living in March 2017. (Image credit: U.N. Photo/Sahem Rababah)

In Jordan, flows in the region’s biggest river system – the Jordan-Yarmouk – have declined as a result of upstream diversion in Israel and Syria. Groundwater levels in some areas have dropped by more than 1 meter per year, and a major aquifer along Jordan’s boundary with Saudi Arabia is heavily pumped on both sides of the border.

Demand for water has climbed largely because of population growth punctuated by waves of refugees, including more than 1 million Syrian refugees in the past decade.

“Jordan’s unique role as a bastion of peace in the region makes these findings all the more cause for concern,” said Yoon, who began work on the study as a PhD student at Stanford University.

The U.N. has committed to ensuring sustainable freshwater management and universal access to clean water and sanitation as one of its 17 sustainable development goals. But until now, analytic frameworks have been lacking, said Gorelick, who led the Jordan Water Project and its continuation, the FUSE Project (Food-water-energy for Urban Sustainable Environments).

The new predictions derive from a first-of-its-kind computer model of Jordan’s freshwater system that simulates interactions among natural processes and human behaviors. Under a range of climate and socioeconomic scenarios, the researchers quantified the effects of maintaining status quo versus introducing measures such as fixing leaky pipes, eliminating water theft, raising tariffs for big water users and reallocating a quarter of water from farms to cities.

The many facets of Jordan’s water crisis make it an especially valuable place to explore the impacts of individual versus simultaneous interventions, Gorelick said. Now that a model exists for this complex environment, it can be adapted with relative ease to other regions.

The single most effective step Jordan can take is to increase supply through large-scale desalination. One proposal among many Jordan has pursued to this end since the 1960s would desalinate water from the Red Sea in the south, transport freshwater north to the capital city Amman and dispose of the leftover highly saline water in the rapidly shrinking Dead Sea.

“You would think that any one of these interventions would have a greater impact. But it turns out you have to do everything,” Gorelick said.

For a country whose economic output per person is less than one-tenth that of the U.S., the scale and cost of near-total reform of its water sector are particularly daunting. “In water-scarce regions where sustainability planning is most needed, it is challenging to think beyond how to distribute scarce freshwater tomorrow, next month, and to some extent, in the next several years,” Gorelick said. “It’s in these places where our long-term policy evaluations are most valuable.”

The work was funded by the National Science Foundation and the UK’s Natural Environment Research Council (NERC), Germany’s Deutsche Forschungsgemeinschaft and the German Federal Ministry of Education and Research as part of the Belmont Forum. Stanford’s Woods Institute for the Environment and USAID provided additional funding.