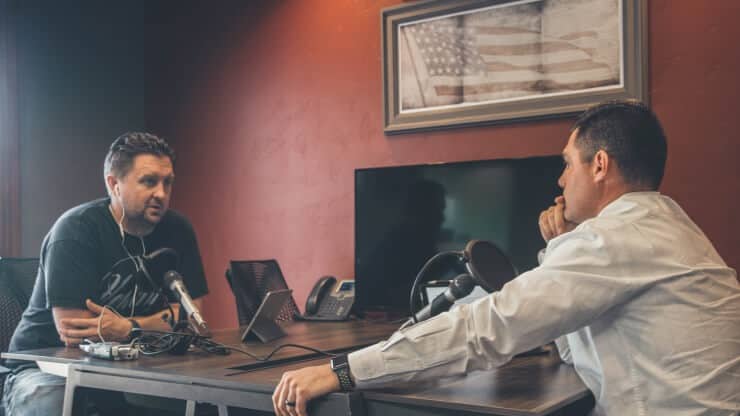 Since the 1950s, political scientists have theorized that political polarization — increased numbers of “political partisans” who view the world with an ideological bias — is associated with an inability to tolerate uncertainty and a need to hold predictable beliefs about the world.

But little is known about the biological mechanisms through which such biased perceptions arise.

To investigate that question, scientists at Brown University measured and compared the brain activity of committed partisans (both liberals and conservatives) as they watched real political debates and news broadcasts. In a recent study, they found that polarization was indeed exacerbated by intolerance of uncertainty: liberals with this trait tended to be more liberal in how they viewed political events, conservatives with this trait tended to be more conservative.

Yet the same neural mechanisms was at work, pushing the partisans into their different ideological camps.

“This is the first research we know of that has linked intolerance to uncertainty to political polarization on both sides of the aisle,” said study co-author Oriel FeldmanHall, an assistant professor of cognitive, linguistic and psychological sciences at Brown. “So whether a person in 2016 was a strongly committed Trump supporter or a strongly committed Clinton supporter, it doesn’t matter. What matters is that an aversion to uncertainty only exacerbates how similarly two conservative brains or two liberal brains respond when consuming political content.”

Jeroen van Baar, study co-author and a former post-doctoral researcher at Brown, said the findings are important because they show that factors other than political beliefs themselves can influence individuals’ ideological biases.

“We found that polarized perception — ideologically warped perceptions of the same reality — was strongest in people with the lowest tolerance for uncertainty in general,” said van Baar, who is now a research associate at Trimbos, the Netherlands Institute of Mental Health and Addiction. “This shows that some of the animosity and misunderstanding we see in society is not due to irreconcilable differences in political beliefs, but instead depends on surprising — and potentially solvable — factors such as the uncertainty people experience in daily life.”

The study was published online in the journal PNAS on Thurs., May 13.

To examine whether and how intolerance for uncertainty shapes how political information is processed in the brain, the researchers recruited 22 committed liberals and 22 conservatives. They used fMRI technology to measure brain activity while participants watched three types of videos: a neutrally worded news segment on a politically charged topic, an inflammatory debate segment and a non-political nature documentary.

After the viewing session, participants answered questions about their comprehension and judgment of the videos and completed an extensive survey with five political and three cognitive questionnaires designed to measure traits like intolerance of uncertainty.

“We used relatively new methods to look at whether a trait like intolerance of uncertainty exacerbates polarization, and to examine if individual differences in patterns of brain activity synchronize to other individuals that hold like-minded beliefs,” FeldmanHall said.

When the researchers analyzed participants’ brain activity while processing the videos, they found that neural responses diverged between liberals and conservatives, reflecting differences in the subjective interpretation of the footage. People who identified strongly as liberal processed political content much in the same way and at the same time — which the researchers refer to as neural synchrony. Likewise, the brains of those who identified as conservative were also in sync when processing political content.

“If you are a politically polarized person, your brain syncs up with like-minded individuals in your party to perceive political information in the same way,” FeldmanHall said.

This polarized perception was exacerbated by the personality trait of intolerance of uncertainty. Those participants — of any ideology — who were less tolerant to uncertainty in daily life (as reported on their survey responses) had more ideologically polarized brain responses than those who are better able to tolerate uncertainty.

“This suggests that aversion to uncertainty governs how the brain processes political information to form black-and-white interpretations of inflammatory political content,” the researchers wrote in the study.

Interestingly, the researchers did not observe the polarized perception effect during a non-political video or even during a video about abortion presented in a neutral, non-partisan tone.

“This is key because it implies that ‘liberal and conservative brains’ are not just different in some stable way, like brain structure or basic functioning, as other researchers have claimed, but instead that ideological differences in brain processes arise from exposure to very particular polarizing material,” van Baar said. “This suggests that political partisans may be able to see eye to eye — provided we find the right way to communicate.”

David J. Halpern of New York University and the University of Pennsylvania was an additional study author.

The research was supported by a Brown University seed grant and by National Institutes of Health COBRE Grant P20GM103645.