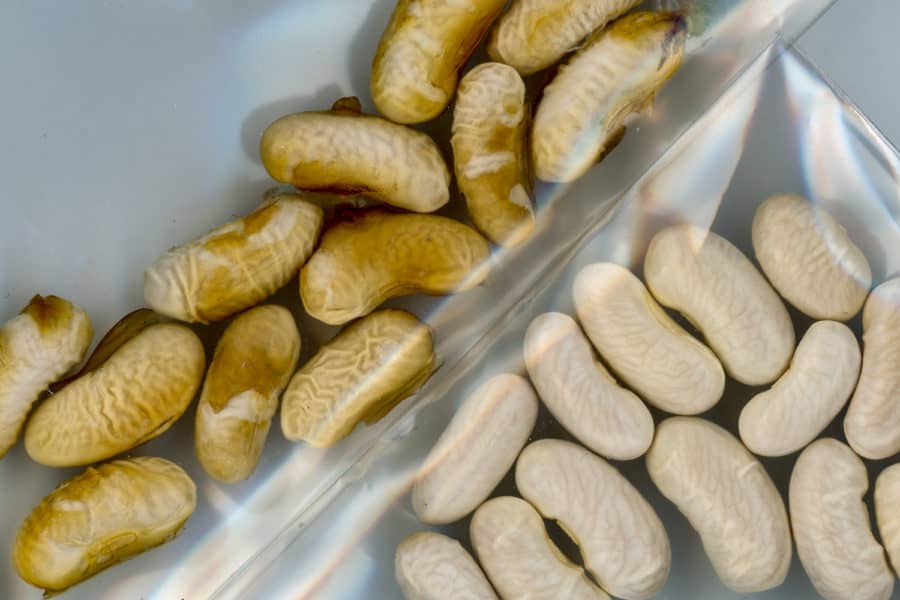 As the world continues to warm, many arid regions that already have marginal conditions for agriculture will be increasingly under stress, potentially leading to severe food shortages. Now, researchers at MIT have come up with a promising process for protecting seeds from the stress of water shortage during their crucial germination phase, and even providing the plants with extra nutrition at the same time.

The process, undergoing continued tests in collaboration with researchers in Morocco, is simple and inexpensive, and could be widely deployed in arid regions, the researchers say. The findings are reported this week in the journal Nature Food, in a paper by MIT professor of civil and environmental engineering Benedetto Marelli, MIT doctoral student Augustine Zvinavashe ’16, and eight others at MIT and at the King Mohammed VI Polytechnic University in Morocco.

The two-layer coating the team developed is a direct outgrowth of years of research by Marelli and his collaborators in developing seed coatings to confer various benefits. A previous version enabled seeds to resist high salinity in the soil, but the new version is aimed at tackling water shortages.

“We wanted to make a coating that is specific to tackling drought,” Marelli explains. “Because there is clear evidence that climate change is going to impact the basin of the Mediterranean area,” he says, “we need to develop new technologies that can help to mitigate these changes in the climate patterns that are going to make less water available to agriculture.”

The new coating, taking inspiration from natural coatings that occur on some seeds such as chia and basil, is engineered to protect the seeds from drying out. It provides a gel-like coating that tenaciously holds onto any moisture that comes along, and envelops the seed with it.

A second, inner layer of the coating contains preserved microorganisms called rhizobacteria, and some nutrients to help them grow. When exposed to soil and water, the microbes will fix nitrogen into the soil, providing the growing seedling with nutritious fertilizer to help it along.

“Our idea was to provide multiple functions to the seed coating,” Marelli says, “not only targeting this water jacket, but also targeting the rhizobacteria. This is the real added value to our seed coating, because these are self-replicating microorganisms that can fix nitrogen for the plants, so they can decrease the amount of nitrogen-based fertilizers that are provided, and enrich the soil.”

Ultimately, if the coatings prove their value through further tests, the coatings are simple enough that they could be applied at a local level, even in remote locations in the developing world. “It can be done locally,” Zvinavashe says. “That’s one of the things we were thinking about while we were designing this. The first layer you could dip coat, and then the second layer, you can spray it on. These are very simple processes that farmers could do on their own.” In general, though, Zvinavashe says it would be more economical to do the coatings centrally, in facilities that can more easily preserve and stabilize the nitrogen-fixing bacteria.

The materials needed for the coatings are readily available and often used in the food industry already, Marelli says. The materials are also fully biodegradable, and some of the compounds themselves can actually be derived from food waste, enabling the eventual possibility of closed-loop systems that continuously recycle their own waste.

Although the process would add a small amount to the cost of the seeds themselves, Marelli says, it may also produce savings by reducing the need for water and fertilizer. The net balance of costs and benefits remains to be determined through further research.

Although initial tests using common beans have shown promising results by a variety of measures, including root mass, stem height, chlorophyll content, and other metrics, the team has not yet cultivated a full crop from seeds with the new coating all the way through to harvest, which will be the ultimate test of its value. Assuming that it does improve harvest yields under arid conditions, the next step will be to extend the research to a variety of other important crop seeds, the researchers say.

“The system is so simple that it can be applied to any seed,” Marelli says. “And we can design the seed coating to respond to different climate patterns.” It might even be possible to tailor coatings to the predicted rainfall of a particular growing season, he says.

“This is very important work,” says Jason C. White, director of the Connecticut Agricultural Experiment Station and a professor of epidemiology at Yale University, who was not associated with this study. “Maintaining global food security in the coming decades will be among the most significant challenges we face as a species. … This approach fits the description of an important tool in that effort; sustainable, responsive and effective.”

White says, “Seed coating technologies are not new, but nearly all existing approaches lack versatility or responsiveness.” The new work, he says, is “both novel and innovative,” and “really opens a new avenue of work for responsive seed coatings to mediate tolerance to a range of biotic and abiotic stressors.”