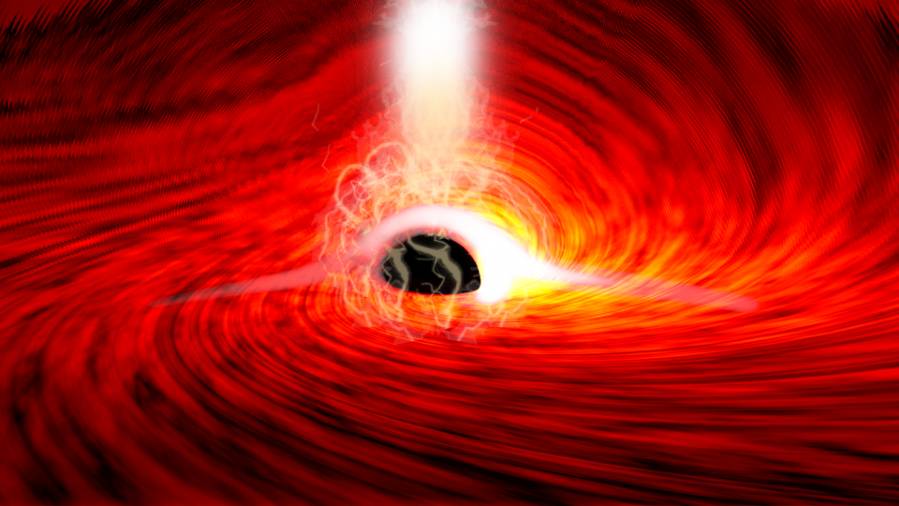 Researchers observed bright flares of X-ray emissions, produced as gas falls into a supermassive black hole. The flares echoed off of the gas falling into the black hole, and as the flares were subsiding, short flashes of X-rays were seen – corresponding to the reflection of the flares from the far side of the disk, bent around the black hole by its strong gravitational field. (Image credit: Dan Wilkins)

Watching X-rays flung out into the universe by the supermassive black hole at the center of a galaxy 800 million light-years away, Stanford University astrophysicist Dan Wilkins noticed an intriguing pattern. He observed a series of bright flares of X-rays – exciting, but not unprecedented – and then, the telescopes recorded something unexpected: additional flashes of X-rays that were smaller, later and of different “colors” than the bright flares.

According to theory, these luminous echoes were consistent with X-rays reflected from behind the black hole – but even a basic understanding of black holes tells us that is a strange place for light to come from.

“Any light that goes into that black hole doesn’t come out, so we shouldn’t be able to see anything that’s behind the black hole,” said Wilkins, who is a research scientist at the Kavli Institute for Particle Astrophysics and Cosmology at Stanford and SLAC National Accelerator Laboratory. It is another strange characteristic of the black hole, however, that makes this observation possible. “The reason we can see that is because that black hole is warping space, bending light and twisting magnetic fields around itself,” Wilkins explained.

The strange discovery, detailed in a paper published July 28 in Nature, is the first direct observation of light from behind a black hole – a scenario that was predicted by Einstein’s theory of general relativity but never confirmed, until now.

“Fifty years ago, when astrophysicists starting speculating about how the magnetic field might behave close to a black hole, they had no idea that one day we might have the techniques to observe this directly and see Einstein’s general theory of relativity in action,” said Roger Blandford, a co-author of the paper who is the Luke Blossom Professor in the School of Humanities and Sciences, Stanford professor of physics and SLAC professor of particle physics and astrophysics. 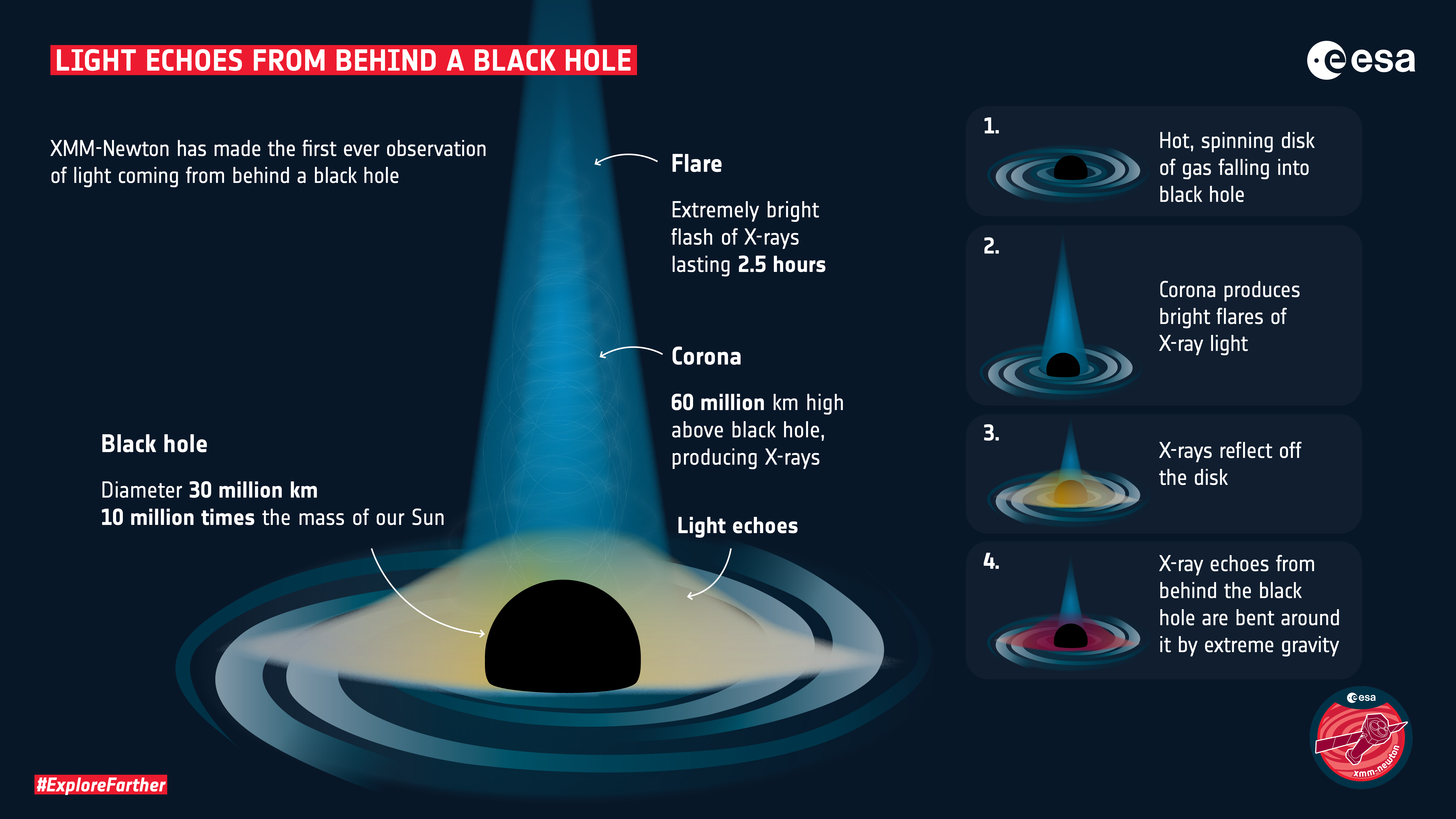 How to see a black hole

The original motivation behind this research was to learn more about a mysterious feature of certain black holes, called a corona. Material falling into a supermassive black hole powers the brightest continuous sources of light in the universe, and as it does so, forms a corona around the black hole. This light – which is X-ray light – can be analyzed to map and characterize a black hole.

The leading theory for what a corona is starts with gas sliding into the black hole where it superheats to millions of degrees. At that temperature, electrons separate from atoms, creating a magnetized plasma. Caught up in the powerful spin of the black hole, the magnetic field arcs so high above the black hole, and twirls about itself so much, that it eventually breaks altogether – a situation so reminiscent of what happens around our own Sun that it borrowed the name “corona.”

“This magnetic field getting tied up and then snapping close to the black hole heats everything around it and produces these high energy electrons that then go on to produce the X-rays,” said Wilkins.

As Wilkins took a closer look to investigate the origin of the flares, he saw a series of smaller flashes. These, the researchers determined, are the same X-ray flares but reflected from the back of the disk – a first glimpse at the far side of a black hole.

“I’ve been building theoretical predictions of how these echoes appear to us for a few years,” said Wilkins. “I’d already seen them in the theory I’ve been developing, so once I saw them in the telescope observations, I could figure out the connection.”

The mission to characterize and understand coronas continues and will require more observation. Part of that future will be the European Space Agency’s X-ray observatory, Athena (Advanced Telescope for High-ENergy Astrophysics). As a member of the lab of Steve Allen, professor of physics at Stanford and of particle physics and astrophysics at SLAC, Wilkins is helping to develop part of the Wide Field Imager detector for Athena.

“It’s got a much bigger mirror than we’ve ever had on an X-ray telescope and it’s going to let us get higher resolution looks in much shorter observation times,” said Wilkins. “So, the picture we are starting to get from the data at the moment is going to become much clearer with these new observatories.”

Co-authors of this research are from Saint Mary’s University (Canada), Netherlands Institute for Space Research (SRON), University of Amsterdam and The Pennsylvania State University.

This work was supported by the NASA NuSTAR and XMM-Newton Guest Observer programs, a Kavli Fellowship at Stanford University, and the V.M. Willaman Endowment at the Pennsylvania State University.