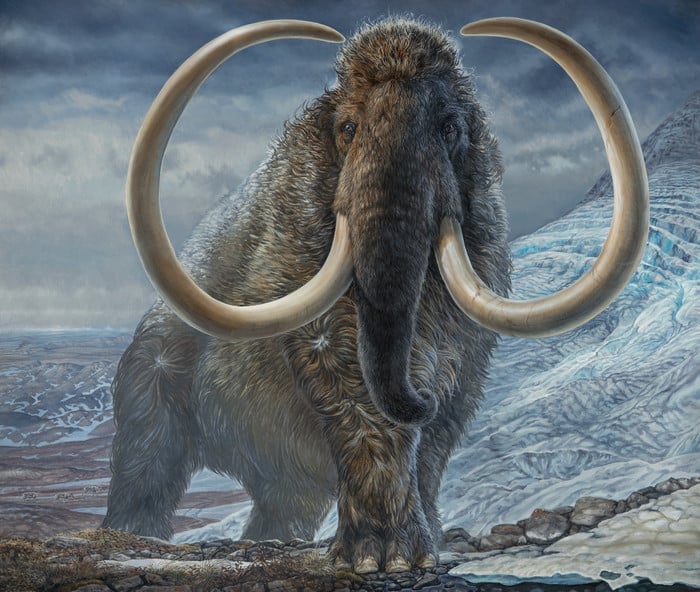 Image by James Havens An adult male woolly mammoth navigates a mountain pass in Arctic Alaska 17,100 years ago. The image is produced from an original life-size painting by paleo artist James Havens. The painting is housed at the University of Alaska Museum of the North in Fairbanks.

An international research team has retraced the astonishing lifetime journey of an Arctic woolly mammoth, which covered enough of the Alaska landscape during its 28 years to almost circle the Earth twice.

Scientists gathered unprecedented details of its life through analysis of a 17,000-year-old fossil from the University of Alaska Museum of the North. By generating and studying isotopic data in the mammoth’s tusk, they were able to match its movements and diet with isotopic maps of the region.

Few details have been known about the lives and movements of woolly mammoths, and the study offers the first evidence that they traveled vast distances. An outline of the mammoth’s life is detailed in the new issue of the journal Science.

“It’s not clear-cut if it was a seasonal migrator, but it covered some serious ground,” said University of Alaska Fairbanks researcher Matthew Wooller, senior and co-lead author of the paper. “It visited many parts of Alaska at some point during its lifetime, which is pretty amazing when you think about how big that area is.”

Researchers at the Alaska Stable Isotope Facility, where Wooller is director, split the 6-foot tusk lengthwise and generated about 400,000 microscopic data points using a laser and other techniques.

The detailed isotope analyses they made are possible because of the way that mammoth tusks grew. Mammoths steadily added new layers on a daily basis throughout their lives. When the tusk was split lengthwise for sampling, these growth bands looked like stacked ice cream cones, offering a chronological record of an entire mammoth’s life.