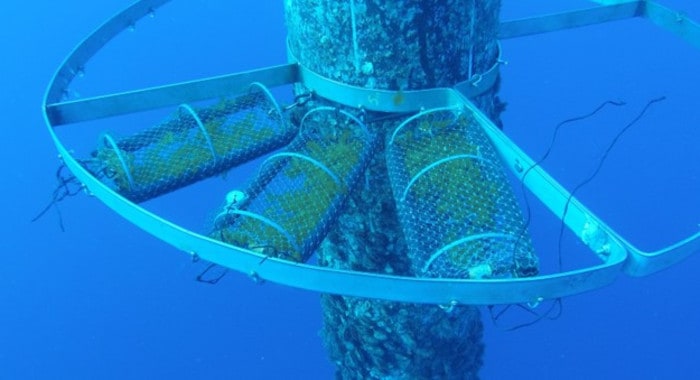 The cultivation reactor that was used as the base of the model.

A new study by Tel Aviv University and University of California, Berkeley proposes a model according to which the establishment of seaweed farms in river estuaries significantly reduces nitrogen concentrations in the estuary and prevents pollution in estuarine and marine environments. The study was headed by doctoral student Meiron Zollmann, under the joint supervision of Prof. Alexander Golberg of the Porter School of Environmental and Earth Sciences and Prof. Alexander Liberzon of the School of Mechanical Engineering at the Iby and Aladar Fleischman Faculty of Engineering, Tel Aviv University. The study was conducted in collaboration with Prof. Boris Rubinsky of the Faculty of Mechanical Engineering at UC Berkeley. The study was published in the prestigious journal Communications Biology.

As part of the study, the researchers built a large seaweed farm model for growing the ulva sp. green macroalgae in the Alexander River estuary, hundreds of meters from the open sea. The Alexander River was chosen because the river discharges polluting nitrogen from nearby upstream fields and towns into the Mediterranean Sea. Data for the model were collected over two years from controlled cultivation studies.

Researchers explain that nitrogen is a necessary fertilizer for agriculture, but it comes with an environmental price tag. Once nitrogen reaches the ocean, it disperses randomly, damaging various ecosystems. As a result, the state local authorities spend a great deal of money on reducing nitrogen concentrations in water, following national and international conventions that limit nitrogen loading in the oceans, including in the Mediterranean Sea.

“My laboratory researches basic processes and develops technologies for aquaculture,” explains Prof. Golberg. “We are developing technologies for growing seaweed in the ocean in order to offset carbon and extract various substances , such as proteins and starches, to offer a marine alternative to terrestrial agricultural production. In this study, we showed that if seaweed is grown according to the model we developed, in rivers’ estuaries, they can absorb the nitrogen to conform to environmental standards and prevent its dispersal in water and thus neutralize environmental pollution. In this way, we actually produce a kind of “natural decontamination facility” with significant ecological and economic value since seaweed can be sold as biomass for human use.

The researchers add that the mathematical model predicts farm yields and links seaweed yield and chemical composition to nitrogen concentration in the estuary. “Our model allows marine farmers, as well as government and environmental bodies, to know, in advance, what the impact will be and what the products of a large seaweed farm will be – before setting up the actual farm,” adds Meiron Zollman. “Thanks to mathematics, we know how to make the adjustments also concerning large agricultural farms and maximize environmental benefits, including producing the agriculturally desired protein quantities.”

“It is important to understand that the whole world is moving towards green energy, and seaweed can be a significant source,” adds Prof. Liberzon, “and yet today, there is no single farm with the proven technological and scientific capability. The barriers here are also scientific: We do not really know what the impact of a huge farm will be on the marine environment. It is like transitioning from a vegetable garden outside the house to endless fields of industrial farming. Our model provides some of the answers, hoping to convince decision-makers that such farms will be profitable and environmentally friendly. Furthermore, one can imagine even more far-reaching scenarios. For example, green energy: “If we knew how to utilize the growth rates for energy in better percentages, it would be possible to embark on a one-year cruise with a kilogram of seaweed, with no additional fuel beyond the production of biomass in a marine environment.”

“The interesting connection we offer here is growing seaweed at the expense of nitrogen treatment,” concludes Prof. Golberg. “In fact, we have developed a planning tool for setting up seaweed farms in estuaries to address both environmental problems while producing economic benefit. We offer the design of seaweed farms in river estuaries containing large quantities of agriculturally related nitrogen residues to rehabilitate the estuary and prevent nitrogen from reaching the ocean while growing the seaweed itself for food. In this way, aquaculture complements terrestrial agriculture.”