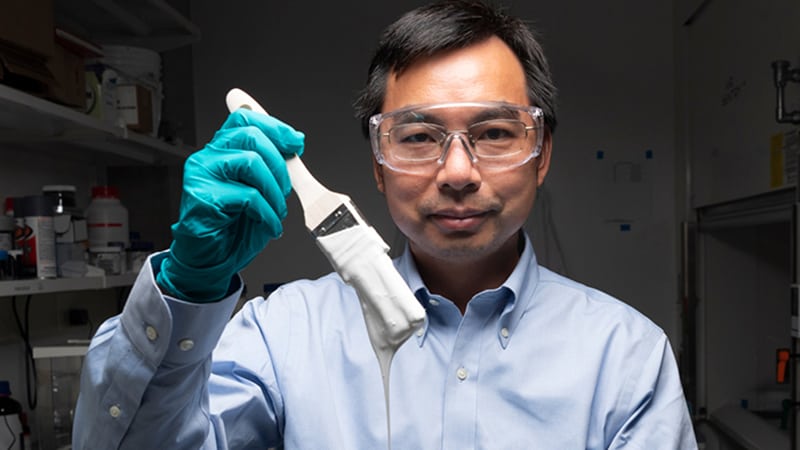 Want to save big on your air conditioning bills? Wait a few years to coat your home with the world’s whitest paint, which may dramatically reduce or even eliminate the need for air conditioning.

Breaking a record for the whitest paint wasn’t a goal for the researchers – curbing global warming was.

“When we started this project about seven years ago, we had saving energy and fighting climate change in mind,” said Xiulin Ruan, a professor of mechanical engineering at Purdue, in a podcast episode of “This Is Purdue.”

Ruan invented the paint with his graduate students. The idea was to create paint that would reflect sunlight away from a building. Making this paint really reflective, however, also made it really white. The formulation that Ruan’s lab created reflects 98.1% of solar radiation at the same time as emitting infrared heat. Because the paint absorbs less heat from the sun than it emits, a surface coated with this paint is cooled below the surrounding temperature without consuming power.

Typical commercial white paint gets warmer rather than cooler. Paints on the market that are designed to reject heat reflect only 80%-90% of sunlight and can’t make surfaces cooler than their surroundings.

Using this new paint formulation to cover a roof area of about 1,000 square feet could result in a cooling power of 10 kilowatts, Purdue researchers showed in a published paper. “That’s more powerful than the air conditioners used by most houses,” Ruan said.

This white paint is the result of research building on attempts going back to the 1970s to develop radiative cooling paint as a feasible alternative to traditional air conditioners. Ruan’s lab had considered over 100 different materials, narrowed them down to 10 and tested about 50 different formulations for each material.

Two features make this paint ultra-white: a very high concentration of a chemical compound called barium sulfate – also used in photo paper and cosmetics – and different particle sizes of barium sulfate in the paint. What wavelength of sunlight each particle scatters depends on its size, so a wider range of particle sizes allows the paint to scatter more of the light spectrum from the sun.

There is a little bit of room to make the paint whiter, but not much without compromising the paint.

The researchers have partnered with a company to scale up the paint and put it on the market. Patent applications for this paint formulation have been filed through the Purdue Research Foundation Office of Technology Commercialization. For further discussion on this intellectual property, contact Will Buchanan at wdbuchanan@prf.org and reference track code PRF 2018-RUAN-68168. Information for this and other Purdue technologies can be found online.

This research was supported by the Cooling Technologies Research Center at Purdue University and the Air Force Office of Scientific Research through the Defense University Research Instrumentation Program (Grant No.427 FA9550-17-1-0368). The research was performed at Purdue’s FLEX Lab and Ray W. Herrick Laboratories and the Birck Nanotechnology Center of Purdue’s Discovery Park.