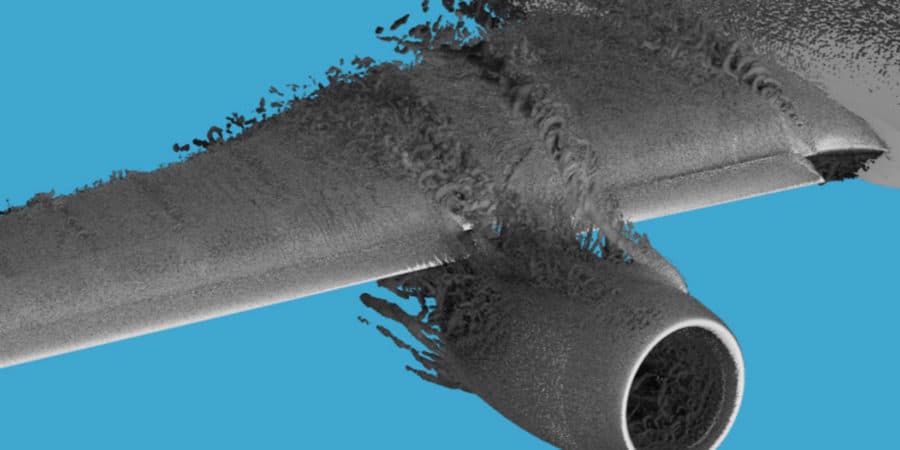 Simulation of the turbulent eddies on the wing of a commercial airplane. | Image courtesy of the Center for Turbulence Research at Stanford

For decades the auto industry crash tested new models for safety considerations the old-fashioned way: They crashed them – over and over and over again. It was slow and expensive, but it worked. Today those tests have given way to computer simulations that are so reliable that rarely, if ever, are engineers surprised by the outcome of a real-world test.

But such is not the case in the aircraft industry. The physics of takeoff, landing and high-speed flight are far more complex, and current simulation tools cannot fully anticipate the design process. “Simulation of a commercial airplane in flight is almost intractable for even the world’s largest computer,” says Parviz Moin, the Franklin P. and Caroline M. Johnson Professor in the School of Engineering, a professor of mechanical engineering and the director of the Center for Turbulence Research (CTR) at Stanford.

Still, aeronautical engineers are working to bring similar accuracy in their models. And now, Moin says he and a team of collaborators have discovered that certain key “quantities of interest” for engineering analysis and design – various forces and moments – can be predicted within the margin of accuracy required by the aircraft industry, with only modest computational effort. They can do so, he and his colleagues say, by incorporating recent advances in numerical methods and physical models and leveraging super-fast graphics processing units and massively parallel software.

Kevin Griffin, a doctoral candidate and a member of CTR, says that whenever you make modeling assumptions, you introduce the potential for error in order to simplify the problem. “But, if the model’s assumptions are physically sound, these quantities of interest can be predicted accurately and efficiently.”

In a concerted effort to reduce that error potential, yet speed their calculations, the team has introduced new simulations that greatly improve the prediction of lift and drag of an airplane’s structure. Notably, these simulations are far more accurate than the earlier models they replace, but run just as fast.

They have achieved their advance by breaking the problem into smaller mathematical components – isolating the area where air and plane meet from turbulence farther away from the surface. Computational resolution of the airflow is most difficult near the “wall” where air meets plane. But these regions are also more universal. And, in that replicability, the researchers have found a key to greater accuracy and speed.

Conceptually and computationally, the flow of air over the surface of a plane is chaotic and turbulent, like a whitewater river, with eddies swirling and evolving rapidly. It’s not that modelers, like Moin and his collaborators, don’t qualitatively understand how these eddies work, but calculating their behavior is computationally demanding – prohibitively so. To speed the calculations, they instead simulate only the largest eddies, which carry the vast majority of the kinetic energy of the flow and are more computationally manageable to resolve.

This leaves the small eddies unaccounted for in the simulations, so Moin and team introduced a second model to calculate their effect on the large eddies. This two-step approach is successful and greatly reduces computational demand, because the small eddies behave similarly wherever they occur, unlike the large eddies, which look very different when in a whitewater river versus on the surface of an airplane.

“If you look at the surface of an airplane under a microscope, it doesn’t look that different at the nose or on the wing,” Griffin explains. “The airflow is also fairly similar wherever you look in the close vicinity of the airplane’s surface. This allows us to model the behavior in an isolated location and apply it everywhere.”

The industry is taking note of these advances. NASA and a key industrial partner have funded Konrad Goc, a Stanford doctoral student at CTR, to establish whether the new approach is ready to be used to design new commercial airplanes.

“We’ve found that our simulations have superior accuracy compared to existing tools in key flow regimes. This will give aircraft designers more confidence in their simulation predictions, especially for complex landing configurations,” says Goc.

The Stanford team is now working to extend their simulations to hypersonic aircraft – planes that fly at several times the speed of sound. Such flight is even more difficult to model than those at slower speeds, but the researchers of CTR are adapting their conventional aircraft models to the complex physics.

As a plane flies, the aircraft body and the air are locked in a shoving match. Plane pushes air; air pushes back. Where they meet, temperatures rise. The faster the plane travels, the greater the heat. Unmitigated, the heat can cause catastrophic failures. “For 70 years,” Griffin says, “researchers have been trying to mathematically predict the extreme thermal loads that hypersonic vehicles experience.” With steady progress, solutions for select problems emerged and were improved, but there was no single approach suitable for all cases.

Moin and Griffin and their co-author, Lin Fu, recently published a paper in Proceedings of the National Academy of Sciences detailing a mathematical model of the flow velocity in hypersonic flight that takes into account both the speed and high levels of heating encountered at such speeds.

Conventional wisdom in the field has it that air has a universal behavior near the airframe, regardless of speed, but, Moin says, this theory has not worked well in the models.

“By accounting for the effect of these turbulent eddies we have made the model more accurate, even when there is a lot of heat being generated,” he says.

They discovered that the airflow where the plane and air meet changes in hypersonic speeds two ways. (Earlier models failed to account for both changes.) The first is friction as the molecules and atoms in the air slide against those in the plane’s fuselage. The second is pressure generated as the speed of the plane increases the force of air against the fuselage. Greater pressure produces higher heat.

This sliding of molecules against one another, like sandpaper, generates a lot of heat where air and plane meet, Griffin explains. But the farther you get away from this layer, the heating process changes from friction to mixing, which is a different sort of mathematical problem, he adds. The new model anticipates, for the first time, this dual nature of friction and compression and the convection currents that swirl away from the plane’s surface.

“We have demonstrated improved accuracy in canonical test cases, so now it is time to apply our model to a simulation of a real hypersonic vehicle,” said Griffin. “I’m optimistic that our model will help designers make more reliable predictions, thereby decreasing cost and making high-speed travel more accessible.”

“In our research group, we sit on a stool with three legs – physics, mathematics and computer science. All three must align to get the right result,” Moin said.

Parviz Moin, the Franklin P. and Caroline M. Johnson Professor in the School of Engineering