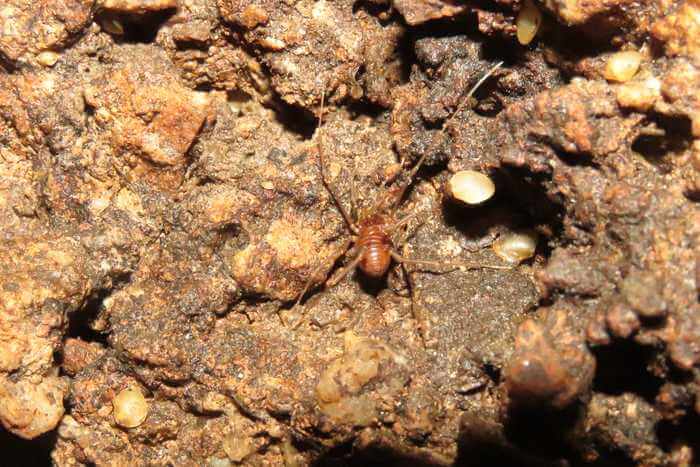 Small individuals of Eupera troglobia sp. n. exposed to the air, with a harvestman (Eusarcus sp.) near them.

Exclusively subterranean bivalves – the group of molluscs comprising clams, oysters, mussels, scallops – are considered a rarity. Prior to the present study, there had only been three such species confirmed in the world: all belonging to a small-sized mussel genus known from southeastern Europe. Furthermore, bivalves are not your typical ‘underworld’ dweller, since they are almost immobile and do not tolerate environments low in oxygen.

Against the odds, a new study by Dr. Luiz Ricardo L. Simone (Museum of Zoology of the University of São Paulo) and Dr Rodrigo Lopes Ferreira (Federal University of Lavras), published in the open-access scholarly journal Subterranean Biology, describes a new to science species of evidently cave-bound – or troglobitic – clam from northern Brazil.

Named Eupera troglobia, the mollusk demonstrates features characteristic for organisms not meant to see the daylight, including lack of pigmentation, reduced size, delicate shell and fewer, yet larger eggs.

Curiously, it was back in 2006 when a report presenting a faunal survey of a cave in northern Brazil featured photographs of what was to be described as Eupera troglobia. However, the evidence was quickly dismissed: the clam must have been carried into the cave by water.

In 2010, Dr Rodrigo Lopes Ferreira accessed the report and noticed the depigmentation of the clams. Wondering whether it was indeed possible that he was looking at a troglobite, he searched amongst the collected specimens from that study, but could not find any of the discoloured bivalve.

Ten years later, his team visited the cave to specifically search for depigmented shells. Although the cave was partially flooded, the researchers were able to spot the specimens they needed attached to the walls of the cave.

In conclusion, the scientists highlight that their discovery is the latest reminder about how important the conservation of the fragile subterranean habitats is, given the treasure troves in their holdings.