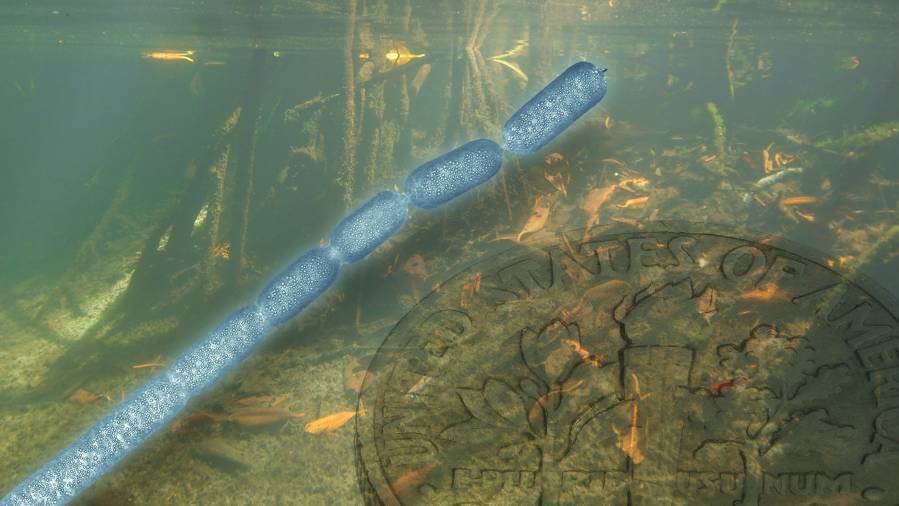 At first glance, the slightly murky waters in the tube look like a scoop of stormwater, complete with leaves, debris, and even lighter threads in the mix. But in the Petri dish, the thin vermicelli-like threads floating delicately above the leaf debris are revealed to be single bacterial cells, visible to the naked eye.

The unusual size is notable because bacteria aren’t usually visible without the assistance of microscope. “It’s 5,000 times bigger than most bacteria. To put it into context, it would be like a human encountering another human as tall as Mount Everest,” said Jean-Marie Volland, a scientist with joint appointments at the U.S. Department of Energy (DOE) Joint Genome Institute (JGI), a DOE Office of Science User Facility located at Lawrence Berkeley National Laboratory (Berkeley Lab) and the Laboratory for Research in Complex Systems (LRC) in Menlo Park, Calif. In the June 24, 2022, issue of the journal Science, Volland and colleagues, including researchers at the JGI and Berkeley Lab, LRC, and at the Université des Antilles, described the morphological and genomic features of this giant filamentous bacterium, along with its life cycle.

For most bacteria, their DNA floats freely within the cytoplasm of their cells. This newly discovered species of bacteria keeps its DNA more organized. “The big surprise of the project was to realize that these genome copies that are spread throughout the whole cell are actually contained within a structure that has a membrane,” Volland said. “And this is very unexpected for a bacterium.”

Strange Encounters in the Mangroves

The bacterium itself was discovered by Olivier Gros, a marine biology professor at the Université des Antilles in Guadeloupe, in 2009. Gros’ research focuses on marine mangrove systems, and he was looking for sulfur-oxidizing symbionts in sulfur-rich mangrove sediments not far from his lab when he first encountered the bacteria. “When I saw them, I thought, ‘Strange,’” he said. “In the beginning I thought it was just something curious, some white filaments that needed to be attached to something in the sediment like a leaf.” The lab conducted some microscopy studies over the next couple of years, and realized it was a sulfur-oxidizing prokaryote.

Silvina Gonzalez-Rizzo, an associate professor of molecular biology at the Université des Antilles and a co-first author on the study, performed the 16S rRNA gene sequencing to identify and classify the prokaryote. “I thought they were eukaryotes; I didn’t think they were bacteria because they were so big with seemingly a lot of filaments,” she recalled of her first impression. “We realized they were unique because it looked like a single cell. The fact that they were a ‘macro’ microbe was fascinating!”

“She understood that it was a bacterium belonging to the genus Thiomargarita,” Gros noted. “She named it Ca. Thiomargarita magnifica.”

“Magnifica because magnus in Latin means big and I think it’s gorgeous like the French word magnifique,” Gonzalez-Rizzo explained. “This kind of discovery opens new questions about bacterial morphotypes that have never been studied before.”

Volland got involved with the giant Thiomargarita bacteria when he returned to the Gros lab as a postdoctoral fellow. When he applied to the discovery-based position at the LRC that would see him working at the JGI, Gros allowed him to continue research on the project.

At the JGI, Volland began studying Ca. T. magnifica in Tanja Woyke’s Single Cells Group to better understand what this sulfur-oxidizing, carbon fixing bacterium was doing in the mangroves. “Mangroves and their microbiomes are important ecosystems for carbon cycling. If you look at the space that they occupy on a global scale, it’s less than 1% of the coastal area worldwide. But when you then look at carbon storage, you’ll find that they contribute 10-15% of the carbon stored in coastal sediments,” said Woyke, who also heads the JGI’s Microbial Program and is one of the article’s senior authors. The team was also compelled to study these large bacteria in light of their potential interactions with other microorganisms. “We started this project under the JGI’s strategic thrust of inter-organismal interactions, because large sulfur bacteria have been shown to be hot spots for symbionts”, Woyke said. “Yet the project took us into a very different direction,” she added.

Views of the sampling sites amidst the mangroves in Guadeloupe. (Credit: Olivier Gros)

Volland took on the challenge to visualize these giant cells in three dimensions and at relatively high magnification. Using various microscopy techniques, such as hard x-ray tomography, for instance, he visualized entire filaments up to 9.66 mm long and confirmed that they were indeed giant single cells rather than multicellular filaments, as is common in other large sulfur bacteria. He was also able to use imaging facilities available at Berkeley Lab, such as confocal laser scanning microscopy and transmission electron microscopy (TEM) to visualize the filaments and the cell membranes in more details. These techniques allowed him to observe novel, membrane-bound compartments that contain DNA clusters. He dubbed these organelles “pepins,” after the small seeds in fruits. DNA clusters were plentiful in the single cells.

The team learned about the cell’s genomic complexity. As Volland noted, “The bacteria contain three times more genes than most bacteria and hundreds of thousands of genome copies (polyploidy) that are spread throughout the entire cell.” The JGI team then used single cell genomics to analyze five of the bacterial cells on the molecular level. They amplified, sequenced and assembled the genomes. In parallel, Gros’ lab also used a labeling technique known as BONCAT to identify areas involved in protein-making activities, that confirmed that the entire bacterial cells were active.

“This project has been a nice opportunity to demonstrate how complexity has evolved in some of the simplest organisms,” said Shailesh Date, founder and CEO of LRC, and one of the article’s senior authors. “One of the things we’ve argued is that there is need to look at and study biological complexity in much more detail than what is being done currently. So organisms that we think are very, very simple might have some surprises.”

The LRC provided funding for Volland through grants from the John Templeton Foundation and the Gordon and Betty Moore Foundation. “This groundbreaking discovery highlights the importance of supporting fundamental, creative research projects to advance our understanding of the natural world,” added Sara Bender of the Gordon and Betty Moore Foundation. “We look forward to learning how the characterization of Ca. Thiomargarita magnifica challenges the current paradigm of what constitutes a bacterial cell and advances microbial research.”

For the team, characterizing Ca. Thiomargarita magnifica has paved the way for multiple new research questions. Among them, is the bacterium’s role in the mangrove ecosystem. “We know that it’s growing and thriving on top of the sediment of mangrove ecosystem in the Caribbean,” Volland said. “In terms of metabolism, it does chemosynthesis, which is a process analogous to photosynthesis for plants.” Another outstanding question is whether the new organelles named pepins played a role in the evolution of the Thiomargarita magnifica extreme size, and whether or not pepins are present in other bacterial species. The precise formation of pepins and how molecular processes within and outside of these structures occur and are regulated also remain to be studied.

Gonzalez-Rizzo and Woyke both see successfully cultivating the bacteria in the lab as a way to get some of the answers. “If we can maintain these bacteria in a laboratory setting, we can use techniques that are not feasible right now”, Woyke said. Gros wants to look at other large bacteria. “You can find some TEM pictures and see what look like pepins so maybe people saw them but did not understand what they were. That will be very interesting to check, if the pepins are already present everywhere.”

Researchers from the National Museum of Natural History (France), Sorbonne University (France) and Cornell University were also involved in this work.