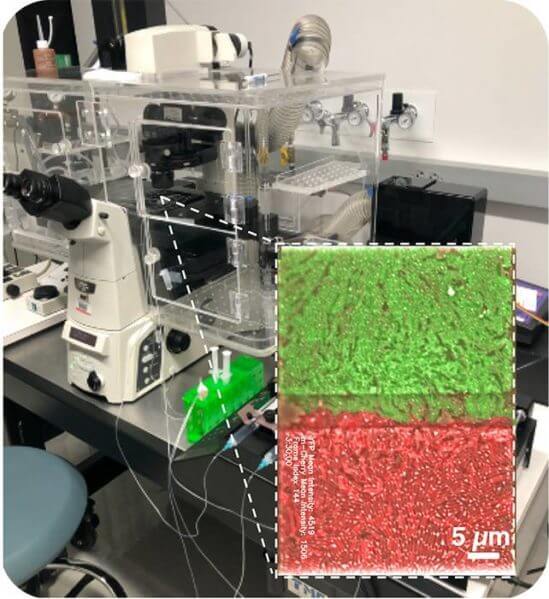 Lauren Andrews, University of Massachusetts Amherst assistant professor and the Marvin and Eva Schlanger Faculty Fellow in the department of chemical engineering, has received a three-year, $1.4 million grant from the National Science Foundation for a collaborative project to engineer synthetic bacteria to neutralize toxic contaminants found in drinking water.

What makes this project unique is “we are programming dynamic interactions and biochemical communication between different bacterial species using a new universal language,” says Andrews, whose lab is located in the interdisciplinary Microbiome, Microbes and Infectious Diseases research them in the Institute for Applied Life Sciences at UMass Amherst.

In nature, gram-negative and gram-positive bacteria are known to use different types of biochemical communication and intercellular signal molecules. “We aim to understand why, if we can synthetically engineer this new kind of intercellular communication between different bacteria, it does not exist in nature,” Andrews says, adding that being able to use both types of bacteria “doesn’t limit the diversity of what can be engineered.”

Andrews will lead efforts on intercellular communication known as cell-cell signaling. Principal investigator on the Boston University half of the grant is Douglas Densmore, professor in electrical and computer engineering. His lab will lead development of the microfluidic devices that will be used to deploy the bacteria and compartmentalize them in chambers to study and precisely control the types and timing of interactions in the system.

“Intercellular communication between bacteria and our ability to precisely control that communication has the potential to demonstrate how well-understood computing paradigms can be enforced in biology,” Densmore says. “Computing principles applied to biology will significantly improve our ability to engineer novel applications.”

The genetic circuits created for this project will be specifically designed to deactivate certain water contaminants including the heavy metals mercury and cadmium and the industrial chemical toluene.

This work expands upon the framework Andrews established through her 2020 NSF CAREER Award project, which is developing a generalizable platform for the automated design of genetic circuits distributed in bacterial consortia.