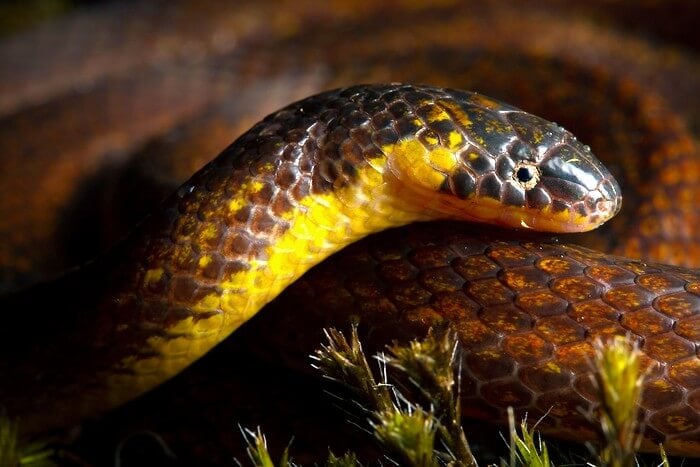 Atractus discovery was found hidden among the graves of the elders of the Andean town Amaluza, Azuay province, Ecuador.

A group of scientists led by Alejandro Arteaga, grantee of The Explorers Club Discovery Expeditions and researcher at Khamai Foundation, discovered three new cryptozoic (living underground) snakes hidden under graveyards and churches in remote towns in the Andes of Ecuador.

The discovery was made official in a study published in the journal ZooKeys. The new snakes, which are small, cylindrical, and rather archaic-looking, were named in honor of institutions or people supporting the exploration and conservation of remote cloud forests in the tropics.

Believe or not, graveyards are also land of the living. In the Andes of Ecuador, they are inhabited by a fossorial group of snakes belonging to the genus Atractus. These ground snakes are the most species-rich snake genus in the world (there are now 150 species known globally), but few people have seen one or even heard about their existence. This is probably because these serpents are shy and generally rare, and they remain hidden throughout most of their lives. Additionally, most of them inhabit remote cloud forests and live buried underground or in deep crevices. In this particular case, however, the new ground snakes where found living among crypts.

The discovery of the three new species took place rather fortuitously and in places where one would probably not expect to find these animals. The Discovery Ground Snake (Atractus discovery) was found hidden underground in a small graveyard in a remote cloud forest town in southeastern Ecuador, whereas the two other new species were found besides an old church and in a small school. All of this seems to suggest that, at least in the Andes, new species of snakes might be lurking just around the corner.

Unfortunately, the coexistence of ground snakes and villagers in the same town is generally bad news for the snakes. The study by Arteaga reports that the majority of the native habitat of the new snakes has already been destroyed. As a result of the retreating forest line, the ground snakes find themselves in the need to take refuge in spaces used by humans (both dead and alive), where they are usually killed on sight.

Diego Piñán, a teacher of the town where one of the new reptiles was found, says: “when I first arrived at El Chaco in 2013, I used to see many dead snakes on the road; others where hit by machetes or with stones. Now, after years of talking about the importance of snakes, both kids and their parents, while still wary of snakes, now appreciate them and protect them.” Fortunately, Diego never threw away the dead snakes he found: he preserved them in alcohol-filled jars and these were later used by Arteaga to describe the species as new to science.

In addition to teaching about the importance of snakes, the process of naming species is important to create awareness about the existence of a new animal and its risk of extinction. In this particular case, two of the new snakes are considered to be facing a high risk of extinction in the near future.

The discovery process also provides an opportunity to recognize and honor the work of the people and institutions fighting to protect wildlife.

Atractus discovery was named to honor The Explorers Club Discovery Expedition Grants initiative, a program seeking to foster scientific understanding for the betterment of humanity and all life on Earth and beyond. The grant program supports researchers and explorers from around the world in their quest to mitigate climate change, prevent the extinction of species and cultures, and ensure the health of the Earth and its inhabitants.

Atractus zgap was named in honor of the Zoological Society for the Conservation of Species and Populations (ZGAP), a program seeking to conserve unknown but highly endangered species and their natural habitats throughout the world. The ZGAP grant program supports the fieldwork of young scientists who are eager to implement and start conservation projects in their home countries.

Atractus michaelsabini was named in honor of a young nature lover, Michael Sabin, grandson of American philanthropist and conservationist Andrew “Andy” Sabin. Through the conservation organization Re:wild, the Sabin family has supported field research of threatened reptiles and has protected thousands of acres of critical habitat throughout the world.

“Naming species is at the core of biology”, says Dr. Juan M. Guayasamin, co-author of the study and a professor at Universidad San Francisco de Quito. “Not a single study is really complete if it is not attached to the name of the species, and most species that share the planet with us are not described.”

“The discovery of these new snakes is only the first step towards a much larger conservation project,” says Arteaga. “Now, thanks to the encouragement of ZGAP, we have already started the process of establishing a nature reserve to protect the ground snakes. This action would not have been possible without first unveiling the existence of these unique and cryptic reptiles, even if it meant momentarily disturbing the peace of the dead in the graveyard where the lived.” Arteaga A, Quezada A, Vieira J, Guayasamin JM (2022) Leaving no stone unturned: three additional new species of Atractus ground snakes (Serpentes, Colubridae) from Ecuador discovered using a biogeographical approach. ZooKeys 1121: 175-210.