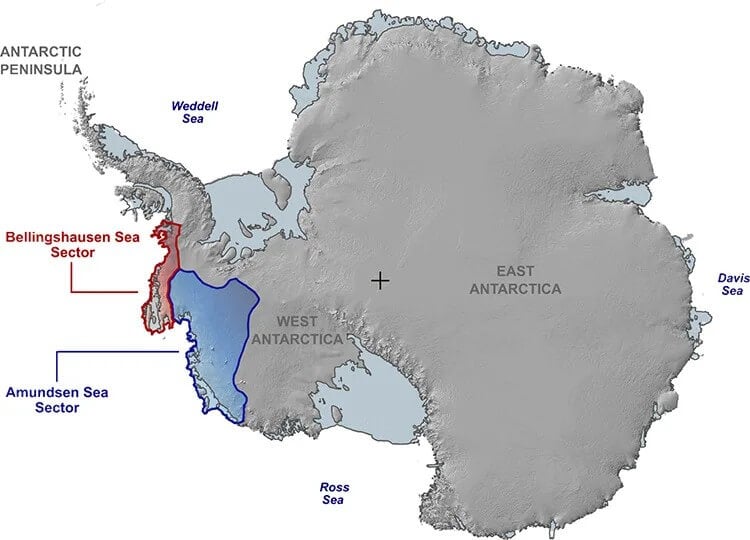 Map of Antarctica highlighting the Amundsen and Bellingshausen Seas

New research finds that ice-sheet-wide collapse in West Antarctica isn’t inevitable: the pace of ice loss varies according to regional differences in atmosphere and ocean circulation.

An international team of researchers has combined satellite imagery and climate and ocean records to obtain the most detailed understanding yet of how the West Antarctic Ice Sheet – which contains enough ice to raise global sea level by 3.3 metres – is responding to climate change.

Their results, reported in the journal Nature Communications, show that while the West Antarctic Ice Sheet continues to retreat, the pace of retreat slowed across a vulnerable region of the coastline between 2003 and 2015. This slowdown was driven by changes in surrounding ocean temperature, which were in turn caused by variations in offshore wind conditions.

The marine-based West Antarctic Ice Sheet, home to the vast and unstable Pine Island and Thwaites glaciers, sits atop a landmass lying up to 2,500 metres below the surface of the ocean. Since the early 1990s, scientists have observed an abrupt acceleration in ice melting, retreat and speed in this area, which is attributed in part to human-induced climate change over the past century.

Other scientists have previously indicated that this type of response across a low-lying landmass could be the onset of an irreversible, ice-sheet-wide collapse called a marine ice sheet instability, which would continue independently of any further climatic influence.

“The idea that once a marine-based ice sheet passes a certain tipping point it will cause a runaway response has been widely reported,” said Dr Frazer Christie from Cambridge’s Scott Polar Research Institute, the paper’s lead author. “Despite this, questions remain about the extent to which ongoing changes in climate still regulate ice losses along the entire West Antarctic coastline.”

Using observations collected by an array of satellites, Christie and colleagues found pronounced regional variations in how the West Antarctic Ice Sheet has evolved since 2003 due to climate change, with the pace of retreat in the Amundsen Sea Sector having slowed significantly in comparison to the neighbouring and much accelerated Bellingshausen Sea Sector.

By analysing climate and ocean records, the researchers linked these regional differences to changes in the strength and direction of offshore surface winds.

In this part of Antarctica, the prevailing winds come from the west. When these westerly winds get stronger, they stir up warmer, saltier water from deep in the ocean, which reaches the Antarctic coastline and increases the rate of ice melt.

“But between 2003 and 2015 offshore of the Amundsen Sea Sector, the intensity of the prevailing westerly winds reduced,” said Christie. “This meant that the deeper, warmer water couldn’t intrude, and we saw a notable change in corresponding glacier behaviour along the region: a clear reduction in the rate of melt and ice-mass loss.”

So what caused these weaker winds and, by implication, reduced ice melt? The researchers found the primary cause was an unusual deepening of the Amundsen Sea Low pressure system, which led to less warm water intrusion. This system is the key atmospheric circulation pattern in the region, and its pressure centre location – near which changes in offshore wind strength are greatest – typically sits offshore of its namesake coast for most of the year.

Farther afield from this pressure centre, the researchers found that the accelerated response of the glaciers flowing from the Bellingshausen Sea Sector can be explained by relatively more unaltered winds, enabling more persistent ocean-driven melt by comparison.

Ultimately, the study illustrates the complexity of the competing ice, ocean and atmosphere interactions driving short-term changes across West Antarctica, and raises important questions about how quickly the icy continent will evolve in a warming world.

“Ocean and atmospheric forcing mechanisms still really, really matter in West Antarctica,” said co-author Professor Eric Steig from the University of Washington in Seattle. “That means that ice-sheet collapse is not inevitable. It depends on how climate changes over the next few decades, which we could influence in a positive way by reducing greenhouse gas emissions.”

The researchers stress that further work is needed to examine how important such mechanisms will be in the future amid a background of increasing marine ice sheet instability. Co-author Professor Robert Bingham from the University of Edinburgh is now working directly on Thwaites Glacier to understand how it is being affected by climate change.

“This study reinforces the urgent requirement to clarify how rapidly the most vulnerable regions of the West Antarctic Ice Sheet such as Thwaites Glacier will retreat, with global consequences for sea level rise,” said Bingham. “New data that we are currently acquiring from a traverse across Thwaites Glacier this January will directly address this goal.”

“There is an intimate link between the climate and how the ice is behaving,” said Christie. “We have the ability to mitigate West Antarctic ice losses – if we curb carbon emissions.”

The study was supported by the Carnegie Trust for the Universities of Scotland, the Scottish Alliance for Geoscience, Environment and Society (SAGES), the Prince Albert II of Monaco Foundation, the Natural Environment Research Council (NERC), part of UK Research and Innovation (UKRI), the US National Science Foundation, the joint UK NERC/US NSF International Thwaites Glacier Collaboration project and the European Space Agency (ESA). Frazer Christie is a Postdoctoral Associate at Jesus College, Cambridge.