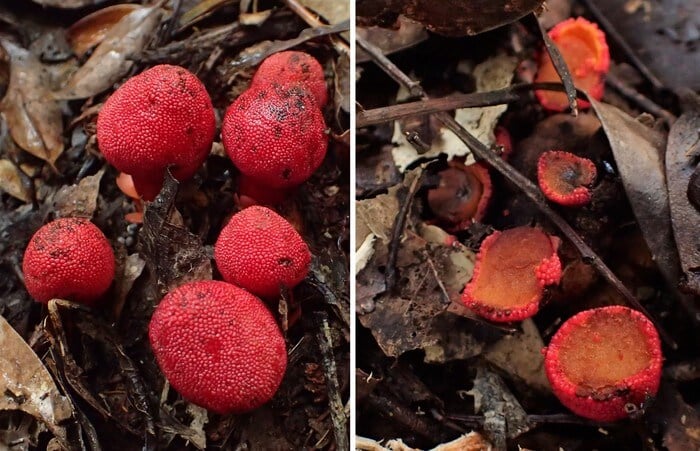 Each round mass looks like a single fruit, However, each cluster is composed of several thousand fruits, each measuring approximately 0.3 mm in size. Upon closer examination, the clusters can be seen to be composed of numerous red bumps These bumps are not the fruits, but modified leaves that that hide the actual fruits underneath.

The iconic yet endangered Amami rabbit (Pentalagus furnessi) has been shown to play a key role in seed dispersal for the non-photosynthetic plant Balanophora yuwanensis.

This discovery, made by Professor SUETSUGU Kenji and graduate student Mr. HASHIWAKI Hiromu of Kobe University’s Graduate School of Science, sheds light on the previously unknown ecological role of the world’s only dark-furred wild rabbit. Despite being the flagship species of the Ryukyu Archipelago, little is known about the ecology of the Amami rabbit because it is a rare, nocturnal animal that inhabits dense forests on two subtropical islands. These findings will be published on January 23, 2023 in the journal Ecology.

Seed dispersal is an essential process for the evolution and ecology of terrestrial plants, making discoveries of uncommon seed dispersal agents particularly interesting. Researchers had previously been puzzled about how the seeds of the non-photosynthetic, mushroom-like Balanophora plants, which have some of the smallest fruits among angiosperms, were dispersed. Suetsugu & Hashiwaki observed feeding marks on Balanophora yuwanensis plants on Amami-Oshima Island in Japan, which they suspected were made by the Amami rabbit.

To investigate this hypothesis, Suetsugu & Hashiwaki conducted a study in the understory of dense forests on Amami-Oshima. Using infrared-triggered cameras, they observed that the Amami rabbit was the main consumer of B. yuwanensis fruit.

In addition, all Amami rabbit fecal samples collected in the field contained at least some viable B. yuwanensis seeds (Figure 3), providing novel evidence of the illusive rabbit species’ role as a seed dispersal agent. Balanophora yuwanensis is a host-specific obligate parasite, which means that efficient seed transportation likely requires the seed to be deposited near the roots of a compatible host. The Amami rabbit may facilitate this through digging and defecating underground in burrows.

Intriguingly, the Amami rabbit is a seed dispersal agent for B. yuwanensis even though the plant produces dry fruits, whereas seed dispersers are typically incentivized by fleshy fruits. As shown in the video, the rare rabbit species consumed both dry fruits and vegetative tissue from B. yuwanensis. This is notable because the potential role of rabbits as seed dispersers has largely been overlooked due to their diet, which primarily consists of leaves rather than fruits. However, this study reveals that the Amami rabbit serves as a major seed disperser for B. yuwanensis, incentivized by the plant’s vegetative tissue.

This research also highlights the previously unrecognized ecological role of the endangered Amami rabbit as a seed dispersal agent, and suggests that the species may have other functions yet to be discovered.