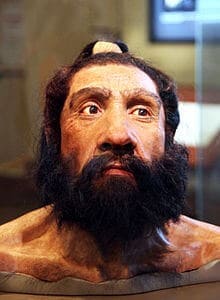 Fast-accumulating data seem to indicate that our close cousins, the Neandertals, were much more similar to us than imagined even a decade ago.

But did they have anything like modern speech and language? And if so, what are the implications for understanding present-day linguistic diversity? The Max Planck Institute for Psycholinguistics in Nijmegen researchers Dan Dediu and Stephen C. Levinson argue in their paper in Frontiers in Language Sciences that modern language and speech can be traced back to the last common ancestor we shared with the Neandertals roughly half a million years ago.

The Neandertals have fascinated both the academic world and the general public ever since their discovery almost 200 years ago. Initially thought to be subhuman brutes incapable of anything but the most primitive of grunts, they were a successful form of humanity inhabiting vast swathes of western Eurasia for several hundreds of thousands of years, during harsh ages and milder interglacial periods. We knew that they were our closest cousins, sharing a common ancestor with us around half a million years ago (probably Homo heidelbergensis), but it was unclear what their cognitive capacities were like, or why modern humans succeeded in replacing them after thousands of years of cohabitation. Recently, due to new palaeoanthropological and archaeological discoveries and the reassessment of older data, but especially to the availability of ancient DNA, we have started to realise that their fate was much more intertwined with ours and that, far from being slow brutes, their cognitive capacities and culture were comparable to ours.

Dediu and Levinson review all these strands of literature and argue that essentially modern language and speech are an ancient feature of our lineage dating back at least to the most recent ancestor we shared with the Neandertals and the Denisovans (another form of humanity known mostly from their genome). Their interpretation of the intrinsically ambiguous and scant evidence goes against the scenario usually assumed by most language scientists, namely that of a sudden and recent emergence of modernity, presumably due to a single – or very few – genetic mutations. This pushes back the origins of modern language by a factor of 10 from the often-cited 50 or so thousand years, to around a million years ago – somewhere between the origins of our genus, Homo, some 1.8 million years ago, and the emergence of Homo heidelbergensis. This reassessment of the evidence goes against a saltationist scenario where a single catastrophic mutation in a single individual would suddenly give rise to language, and suggests that a gradual accumulation of biological and cultural innovations is much more plausible.

Interestingly, given that we know from the archaeological record and recent genetic data that the modern humans spreading out of Africa interacted both genetically and culturally with the Neandertals and Denisovans, then just as our bodies carry around some of their genes, maybe our languages preserve traces of their languages too. This would mean that at least some of the observed linguistic diversity is due to these ancient encounters, an idea testable by comparing the structural properties of the African and non-African languages, and by detailed computer simulations of language spread.