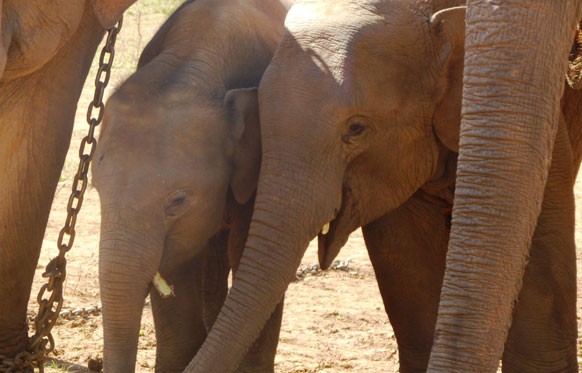 Wild Asian elephants slink quietly away at the sound of a growling tiger, but trumpet and growl before retreating from leopard growls, researchers at the University of California, Davis, have found. The work, published Sept. 11 in the journal Biology Letters, could help Indian farmers protect their crops from marauding elephants and save the lives of both people and animals.

“We noticed that the elephants were more scared of tigers than of leopards,” said Vivek Thuppil, who carried out the work with Richard Coss, professor of psychology at UC Davis, as part of his Ph.D. in animal behavior.

Thuppil and Coss studied the elephants’ behavior in an effort to prevent conflicts between human farmers and elephant herds that raid their fields by night. It’s the first study of nighttime antipredator behavior in elephants.

Crop raiding by elephants is a serious problem in India, Thuppil said. Farmers use drums, firecrackers and electrified fences to try to keep them out of their crops. About 400 people a year are killed during these encounters, and some hundred elephants are killed through poisoning, electrocution or other means, according to an Indian government report.

The researchers set up equipment to play back leopard or tiger growls triggered when the elephants crossed infrared beams across paths leading to crop fields, and captured the events on video.

Leopards aren’t known to prey on elephants, but tigers will sometimes attack a young elephant that becomes separated from the herd.

Although their initial reactions were very different, the elephants ultimately retreated from growls of both cats.

The elephants might be confused by the leopard growl, Thuppil said. A real leopard would most likely retreat from a group of elephants. Still, there’s probably no benefit to the elephants in risking an encounter with a leopard, even if it is not a known predator.

“You don’t want to mess with something with claws and teeth,” Thuppil said.

Wild elephant populations are stable or even increasing in forest areas, Thuppil said. While the forest itself is protected, human settlement increasingly has moved into the buffer areas surrounding the forest, which elephants pass through while foraging or visiting different patches of forest.

The work was supported by the U.S. Fish and Wildlife Service Asian Elephant Conservation Fund and the Rufford Small Grants Foundation.