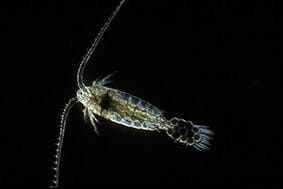 A species of one of the world’s tiniest creatures, ocean plankton, is heading for extinction as it struggles to adapt to changes in sea temperature.

And it may take local fisheries with it.Research led by Deakin University (Warrnambool, Australia) and Swansea University (UK) has found that a species of cold water plankton in the North Atlantic, that is a vital food source for fish such as cod and hake, is in decline as the oceans warm. This will put pressure on the fisheries that rely on abundant supplies of these fish.“There is overwhelming evidence that the oceans are warming and it will be the response of animals and plants to this warming that will shape how the oceans look in future years and the nature of global fisheries,” explained Deakin’s professor of marine science, Graeme Hays.

“We know that warm water species are expanding their ranges as warming occurs, and vice versa. What is not known is whether species are able to adapt to new temperatures. Will, for example, cold water species gradually adapt so they can withstand warming seas and not continually contract their ranges. From the results of our study, it is looking like the answer is no.”

Answering the question of adaptation is not easy as it requires long-term observations spanning multiple generations. For this study, the research team examined a 50-year time series from the North Atlantic on the distribution and abundance of two very common but contrasting species of ocean plankton, Calanus helgolandicus that lives in warmer water and Calanus finmarchicus that lives in cold water. These crustaceans are vital food for fish and underpin many commercial fisheries in the North Atlantic region.

The researchers were surprised to find that the cold water C. finmarchicus has continued to contract its range over 50 years of warming.

“In other words, even over 50 generations (each plankton lives for one year or less) there is no evidence of adaptation to the warmer water,” Professor Hays said.

“The consequences of this study are profound. It suggests that cold water plankton will continue to become scarcer as their ranges contract to the poles, and ultimately disappear. So certainly for these animals, thermal adaptation appears unlikely to limit the impact of climate change.

“C. finmarchicus is a key food source for fish such as cod and hake. So continued declines in abundance will have a negative impact on the long-term viability of cold water fisheries in the North Sea and other areas in the southern part of their range. At the same time the continued increase in abundance of the warm water plankton, C. helgolandicus, will likely play a role in the emergence of new fisheries for warm water species.”

Professor Hays said that the impact of ocean warming was not confined to the North Atlantic region.

“Ocean warming is occurring globally and so these findings are likely to apply to other areas around the world including southern hemisphere locations such as Australia, South Africa and South America that support important fisheries dependant on plankton,” Professor Hays said.

“Plankton recorders deployed in the southern hemisphere, for example as part of the Australian Continuous Plankton Recorder Project (a joint project of CSIRO Marine and Atmospheric Research and the Australian Antarctic Division), will continue to document these changes.”

The results of the study will be published in the journal Global Change Biology.