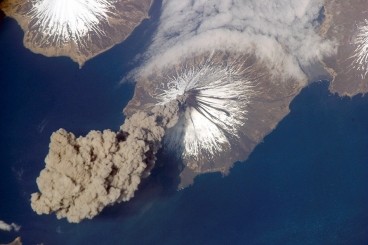 By the late 1990s, scientists had observed more than two decades of rapid global warming, and expected the warming trend to continue. Instead, despite continuing increases in greenhouse gas emissions, the Earth’s surface temperatures have remained nearly flat for the last 15 years. The International Panel on Climate Change verified this recent warming “hiatus” in its latest report.

Researchers around the globe have been working to understand this puzzle — looking at heat going into the oceans, changes in wind patterns, and other factors to explain why temperatures have stayed nearly stable, while greenhouse gas concentrations have continued to rise. In a study published today in Nature Geoscience, a team of scientists from MIT and elsewhere around the U.S. report that volcanic eruptions have contributed to this recent cooling, and that most climate models have not accurately accounted for the effects of volcanic activity.

“This is the most comprehensive observational evaluation of the role of volcanic activity on climate in the early part of the 21st century,” says co-author Susan Solomon, the Ellen Swallow Richards Professor of Atmospheric Chemistry and Climate Science at MIT. “We assess the contributions of volcanoes on temperatures in the troposphere — the lowest layer of the atmosphere — and find they’ve certainly played some role in keeping the Earth cooler.”

There are many components of the Earth’s climate system that can increase or decrease the temperature of the globe. For example, while greenhouse gases cause warming, some types of small particles, known as aerosols, cause cooling. When volcanoes erupt explosively enough, they enhance these aerosols — a phenomenon referred to as “volcanic forcing.”

“The recent slowdown in observed surface and tropospheric warming is a fascinating detective story,” says Ben Santer, the lead author of the study and a climate scientist at Lawrence Livermore National Laboratory. “There is not a single culprit, as some scientists have claimed. Multiple factors are implicated. The real scientific challenge is to obtain hard quantitative estimates of the contributions of each of these factors to the so-called slowdown.”

The researchers verified the cooling phenomenon by performing two different statistical tests to determine whether recent volcanic eruptions have cooling effects that can be distinguished from the intrinsic variability of the climate. The team found evidence for significant correlations between volcanic aerosol observations and satellite-based estimates of both tropospheric temperature and sunlight reflected by the particles off the top of the atmosphere.

“What’s exciting in this work was that we could detect the influence of the volcanic aerosols in new ways. Using satellite observations confirmed the fact that the volcanic particles reflected a significant amount of the sun’s energy out to space, and of course losing energy means cooling — and the tropospheric temperatures show that too,” explains Solomon, who is also a researcher with MIT’s Joint Program on the Science and Policy of Global Change. “There are still uncertainties in exactly how big the effects are, so there is more work to do.”

Alan Robock, a professor of environmental sciences at Rutgers University and a leading expert on the impacts of volcanic eruptions on climate, says these findings are an important part of the larger climate picture. “This paper reminds us that there are multiple causes of climate change, both natural and anthropogenic, and that we need to consider all of them when interpreting past climate and predicting future climate.”

“Since none of the standard scenarios for evaluating future global warming include volcanic eruptions,” Robock adds, “this paper will help us quantify the impacts of future large and small eruptions when they happen, and thus better interpret the role of humans in causing climate change.”

This research was led by a team at Lawrence Livermore National Laboratory and builds upon work Solomon conducted in 2011, finding that aerosols in an upper layer of the atmosphere — the stratosphere — are persistently variable and must be included in climate models to accurately depict climate changes.

The research was supported by the U.S. Department of Energy.