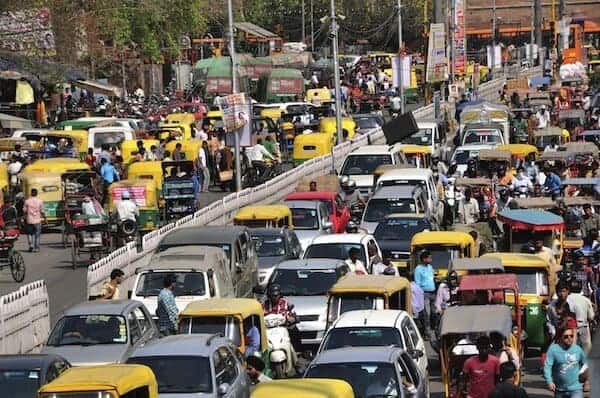 What makes cities in India and China so frustrating to drive in—heavy traffic, aggressive driving style, few freeways—makes them ideal for saving fuel with hybrid vehicles, according to new research by scientists at the U.S. Department of Energy’s Lawrence Berkeley National Laboratory (Berkeley Lab). In a pair of studies using real-world driving conditions, they found that hybrid cars are significantly more fuel-efficient in India and China than they are in the United States.

These findings could have an important impact in countries that are on the brink of experiencing an explosion in the sales of personal vehicles; the government of India has already taken note of the findings. “Currently greenhouse gas emissions from the transportation sector in India and China are a smaller piece of the pie compared with other sectors,” said lead researcher Anand Gopal. “But vehicle ownership is going to skyrocket in these countries. That is why we decided to focus on this area. Hybrid and electric vehicles can significantly reduce carbon emissions and other pollutants.”

What’s more, hybrids in India are also more fuel-efficient than they are officially rated for. “With the official fuel economy test procedure currently used in India, fuel savings for hybrids are fairly grossly underestimated, showing only a 29 percent savings over conventional vehicles,” Gopal said. “The test cycle is not representative of driving conditions in India, so that’s sending the wrong signal to the consumer.”

Their results were reported in two papers, “Understanding the fuel savings potential from deploying hybrid cars in China,” published in Applied Energy, and “Understanding fuel savings mechanisms from hybrid vehicles to guide optimal battery sizing for India,” accepted for publication in the International Journal of Powertrains, also co-authored by Berkeley Lab battery scientist Venkat Srinivasan. The studies are believed to be the first of their kind.

Gopal, working with Berkeley Lab scientists Samveg Saxena and Amol Phadke, used a powertrain simulation model called Autonomie to create a hypothetical hybridized version of the top-selling conventional car in each country—in China it was the Buick Excelle and in India the Maruti Alto. The reason for creating a hypothetical version was to isolate the improvement from hybridization and measure only that benefit.

For the India analysis the researchers simulated drive cycles in two Indian cities (New Delhi and Pune) taken from published studies and also used the Modified Indian Drive Cycle, the test for the official fuel economy rating. In China they simulated drive cycles in 11 cities and with three types of hybrid powertrains (start-stop, parallel and power-split). In both cases they compared it to drive cycles used for U.S. fuel efficiency ratings, which include about 55 percent city driving and 45 percent highway driving.

They found that driving a hybrid would achieve fuel savings of about 47 to 48 percent over a conventional car in India and about 53 to 55 percent in China. In the United States, hybrids are rated to produce a fuel savings of about 40 percent over their conventional counterparts. Currently hybrid and electric vehicles have a tiny share of the market in India and China and are seen as a higher-end product.

“One is regenerative braking, another is being able to turn off the engine when the car is stopped or in low-power condition, and another is that the hybrid system—the electric motor, the batteries—enable the engine to operate at a higher efficiency operating condition,” Saxena explained. “We weighed the importance of these three mechanisms against each other for the Indian vehicles, and found that the ability to increase engine efficiency was the most important reason, second was regenerative braking, then engine shutdown.”

The engineering results were a little surprising, Saxena said. “We went into the study thinking regenerative braking would make for very unique fuel-saving opportunities,” he said.

The government of India, which launched a national plan last year with the goal of getting 6 to 7 million hybrid and electric vehicles (EVs) on the road by 2020, is already working with the Berkeley Lab researchers to further analyze their results. India is a member country of the Electric Vehicles Initiative (EVI) of the Clean Energy Ministerial, a global forum of governments focused on accelerating the transition to clean energy technologies. Through EVI, Berkeley Lab’s research will guide India in moving forward with its EV plan.

“This research performed by Berkeley Lab has helped us understand in much better detail the real-world value of electric vehicles to India,” said Ambuj Sharma, Additional Secretary of India’s Department of Heavy Industry. “Their work has shown that Indian conditions are much more conducive to electric vehicles than we expected and has given a greater impetus and importance to the National Mission on Electric Mobility.”

Gopal says one of the next steps is to work on China, which is also a participant in the Electric Vehicles Initiative. China has been the world’s largest car market since 2009, with double-digit percentage increases in annual car sales, but sales are expected to grow even faster as household income rises. “The main reason for the impending vehicle boom is that people are getting wealthier, and there’s a very strong tie between greater household wealth and vehicle ownership,” Gopal said. “It’s not about transportation. Owning a car is a social symbol.”