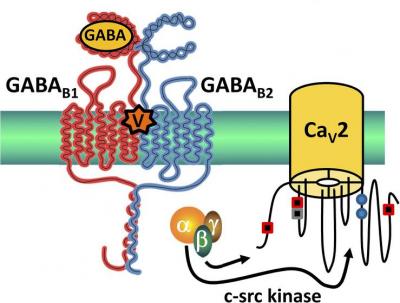 The venom from marine cone snails, used to immobilize prey, contains numerous peptides called conotoxins, some of which can act as painkillers in mammals. A recent study in The Journal of General Physiology provides new insight into the mechanisms by which one conotoxin, Vc1.1, inhibits pain. The findings help explain the analgesic powers of this naturally occurring toxin and could eventually lead to the development of synthetic forms of Vc1.1 to treat certain types of neuropathic pain in humans.

Neuropathic pain, a form of chronic pain that occurs in conjunction with injury to—or dysfunction of—the nervous system, can be debilitating and difficult to treat, and the medical community is eager to find better methods to minimize what can be a serious condition. Neuropathic pain is associated with changes in the transmission of signals between neurons, a process that depends on several types of voltage-gated calcium channels (VGCCs). However, given the importance of these VGCCs in mediating normal neurotransmission, using them as a pharmacological target against neuropathic pain could potentially lead to undesirable side effects.

In previous studies, David Adams and colleagues from RMIT University in Melbourne showed that Vc1.1 acted against neuropathic pain in mice; they found that, rather than acting directly to block VGCCs, Vc1.1 acts through GABA type B (GABAB) receptors to inhibit N-type (Cav2.2) channels.

Now, Adams and colleagues show that Vc1.1 also acts through GABAB receptors to inhibit a second, mysterious class of neuronal VGCCs that have been implicated in pain signaling but have not been well understood—R-type (Cav2.3) channels. Their new findings not only help solve the mystery of Cav2.3 function, but identify them as targets for analgesic conotoxins.