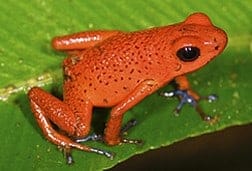 U.S. Department of Agriculture (USDA) scientists and their collaborators have found that naturally occurring compounds—alkaloids—that are found on the skin of certain poison frogs can incapacitate and kill fire ants.

Poison frogs, natives of Central and South America, do not make alkaloids, but instead sequester them by eating ants, mites, millipedes and other arthropods that produce these compounds, according to Robert Vander Meer, research leader for CMAVE’s Imported Fire Ant and Household Insects Unit. He and his colleagues developed a bioassay to measure the toxicity of 20 poison-frog alkaloids—some of which were very effective in controlling fire ants, while others were not.

Alkaloids derived from mites and found on the skin of Central America’s poison frog, Oophaga pumilio, were more effective at incapacitating fire ants than the fire ants’ own alkaloids. Scientists published these findings, which broaden the use of poison-frog alkaloids to include protection against predator ants such as fire ants, in Naturwissenschaften in 2013.

Scientists are considering expanding their research to include mosquitoes. Earlier work published in Proceedings of the National Academy of Sciencesdemonstrated that a poison-frog alkaloid called pumiliotoxin 251D was effective against the yellowfever mosquito. Insects that landed on surfaces treated with the compound could no longer fly and died.

Mosquitoes cause problems worldwide, transmitting pathogens that can lead to serious diseases. In the future, poison-frog alkaloids or derivatives may prove useful in helping to control mosquitoes, according to Vander Meer.

Read more about this research in the November/December 2014 issue of Agricultural Research magazine.