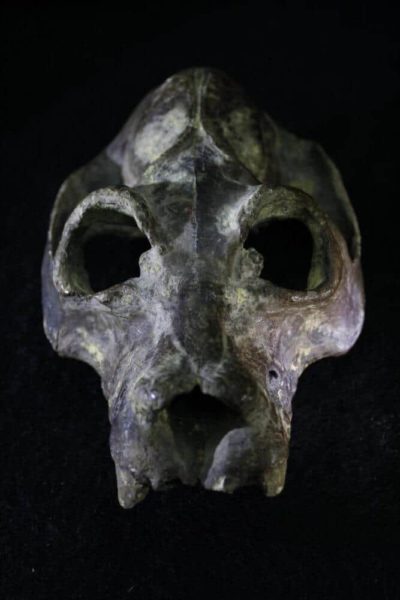 Ancient DNA extracted from the bones and teeth of giant lemurs that lived thousands of years ago in Madagascar may help explain why the giant lemurs went extinct. It also explains what factors make some surviving species more at risk today, says a study in the Journal of Human Evolution.

Most scientists agree that humans played a role in the giant lemurs’ demise by hunting them for food and forcing them out of habitats. But an analysis of their DNA suggests that the largest lemurs were more prone to extinction than smaller-bodied species because of their smaller population sizes, according to this team of American and Malagasy researchers.

By comparing the species that died out to those that survived, scientists hope to better predict which lemurs are most in need of protection in the future.

The African island of Madagascar has long been known as a treasure trove of unusual creatures. More than 80 percent of the island’s plants and animals are found nowhere else. But not long ago, fossil evidence shows there were even more species on the island than there are today. Before humans arrived on the island some 2,000 years ago, Madagascar was home to 10-foot-tall elephant birds, pygmy hippos, monstrous tortoises, a horned crocodile, and at least 17 species of lemurs that are no longer living — some of which tipped the scales at 350 pounds, as large as a male gorilla.

Using genetic material extracted from lemur bones and teeth dating back 550 to 5,600 years, an international team of researchers analyzed DNA from as many as 23 individuals from each of five extinct lemur species that died out after human arrival. They looked at a giant ruffed lemur, a baboon lemur, a koala lemur and two sloth lemurs — all housed in the collections at the University of Antananarivo and the Duke Lemur Center at Duke University. The study also included genetic data from eight extant species, including the three largest lemur species still alive today.

The researchers found that the species that died out had lower genetic diversity than the ones that survived — a hallmark of small population size.

The results aren’t entirely surprising, said George Perry, a scientist from Penn State University who was part of the research team. “Larger-bodied species often need larger territories and are fewer in number than smaller-bodied species,” he explained, so they would have been more susceptible to extinction as hunting, logging, farming and other human activities took their toll.

But the researchers hope that lessons learned from ancient DNA will be useful in protecting the species that remain.

More than 70 percent of the roughly 100 lemur species living today are now considered endangered or critically endangered by the International Union for the Conservation of Nature (IUCN), making them the most threatened group of mammals on Earth, according to a paper published in 2014 in Science.

The team found no link between body size and genetic diversity in lemur species living today — the largest of which tip the scales at about 15 pounds. So they think that body size is less useful for establishing conservation priorities.

For this study the researchers looked only at mitochondrial DNA, which represents only a small portion of the DNA in each animal’s cells. Their next step is to try to sequence the DNA in the cell nucleus, where most of an organism’s genetic material is located.

“Analyzing nuclear DNA will enhance our understanding of the actual population sizes of the lemurs before they succumbed to extinction, which will better allow us to develop genetic ‘extinction alerts’ for living lemurs,” said study co-author Anne Yoder of Duke..

“We can also start to look at genes with known roles in traits like color vision and taste perception, to help expand our understanding of how these animals lived,” Perry said.

The research was supported by grants from the National Science Foundation. Additional support was provided by the Ahmanson Foundation, the Theodore F. and Claire M. Hubbard Family Foundation, Conservation International, the Primate Action Fund, the Margot Marsh Biodiversity Foundation and the National Geographic Society.

“This publication will hopefully be a step towards unlocking the answers of why and how lemur diversity expanded across this large island and why so much of it has been lost,” said co-author Edward Louis of Omaha’s Henry Doorly Zoo and Aquarium.