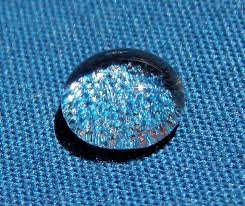 Fear of water may seem like an irrational hindrance to humans, but on a molecular level, it lends order to the world.

Some substances — lots of greasy, oily ones in particular — are hydrophobic. They have no attraction to water, and essentially appear repelled by the stuff.

Combine hydrophobic pieces in a molecule with parts that are instead attracted to water, and sides are taken. Structure appears, as in the membranes that encircle living cells.

“Those membranes are formed by molecules that are mostly greasy, and that pack together to avoid interacting with water,” says Sam Gellman, a University of Wisconsin–Madison chemistry professor. “The hydrophilic parts point in one direction — toward water — and the hydrophobic parts in the other, and the result is molecular organization that forms a wall.”

And with it, all the things of life that require the wall’s protection.

“It’s arguably one of the most important interactions between molecules, because it occurs in water where biology and so much technology happens,” says Nicholas Abbott, a UW–Madison chemical and biological engineering professor.

Abbott, Gellman and a group of University of Wisconsin–Madison researchers have provided new insights on hydrophobic interactions within complex systems. In a study published today in the journal Nature, the researchers show how the nearby presence of polar (water-attracted, or hydrophilic) substances can change the way the nonpolar hydrophobic groups want to stick to each other.

The team built simple molecules with stable structures that incorporated hydrophobic and hydrophilic groups in precisely determined patterns. Then they used an atomic force microscope, a tool that allowed them to probe the surface of the molecules by tugging hydrophobic units apart and measuring the stickiness between them.

“We show that if you have two nonpolar groups, and they are going to interact through water, the way they interact depends on their neighbors,” Abbott says. “It’s just like a pair of friends having a conversation. The way in which they interact will depend on who is standing close enough to hear.”

It’s been theorized that the bonds between hydrophobic particles would indeed change in the presence of charged, water-loving molecules. The researchers’ experiments demonstrated those effects, and noticed also that as the chemical structure of charged hydrophilic groups change, so does the magnitude of their impact on the stickiness between hydrophobic groups.

“That sticky interaction is defined by the hydrophobic effect,” Gellman says. “And our measurements show that it’s possible to place polar groups in a way that can dial up or dial down the adhesion between two hydrophobic surfaces in water.”

This level of control could offer a new way to design all sorts of molecules that perform useful functions in water, such as ointments based on emulsions, food products, detergents and more.

“You can imagine new designs of switchable materials, smart materials, and maybe drug delivery systems that can release an active agent in a controlled manner by manipulating this interaction,” Abbott says.

The collaborators’ work, which was supported by the National Science Foundation and sparked by a partnership made possible through UW–Madison’s Nanoscale Science and Engineering Center, may also sharpen the way biologists view changes in proteins.

Proteins that catalyze reactions and pass information at the molecular level in living cells are often very complex combinations of hydrophobic and hydrophilic groups. The qualities of their component parts that attract or repel water play a role in the way proteins fold up, which then determines whether and how they perform their intended tasks.

After proteins are synthesized and fold up in their proper shapes, biological processes begin to modify their structure — adding here or replacing there.

“Another implication of our research,” Gellman says, “is that those changes can have profound effects that have not previously been understood.”