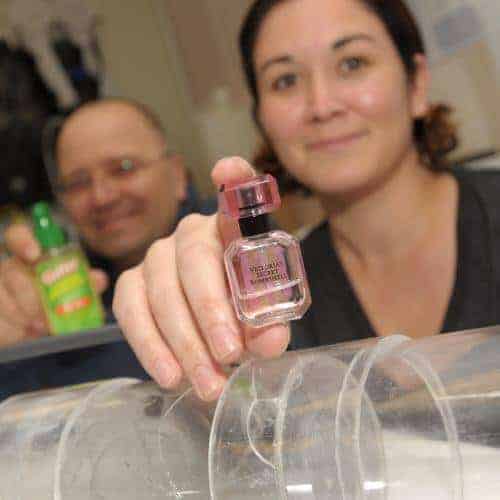 If you want to keep away blood-sucking insects, DEET products are your best bet according to a recent study from New Mexico State University. Researchers also discovered a certain perfume performed better at protecting against mosquitoes than some commercial insect repellents.

Recently, Rodriguez and other researchers in NMSU’s College of Arts and Sciences tested the effectiveness of 10 commercially available products intended to repel mosquitoes. Their findings were published last month in the “Journal of Insect Science.”

The products were tested against two common mosquito species: the yellow fever mosquito and the Asian tiger mosquito, both known to transmit dengue fever, chikungunya, yellow fever and other diseases.

“People need to protect themselves, especially if they travel to the tropics,” said Immo Hansen, an NMSU associate professor of biology involved in the study. “Insect repellents can be highly efficient, but you need to find out which work.”

For the experiment, a volunteer’s bare hand served as the attractant. The researchers used a fan to push the volunteer’s scent through a Y-shaped tube toward a holding chamber containing roughly 20 mosquitoes. Upon release, the mosquitoes flew toward the hand if they were attracted to the scent; if repelled, the mosquitoes either flew to the opposite tube or did not move.

The tests concluded that DEET products strongly repel both species of mosquito. The other products produced varied results.

The non-DEET repellents had little to no effect on the yellow fever mosquito, with one exception: Cutter Lemon Eucalyptus Insect Repellent was found to have similar efficacy as the DEET repellents.

Surprisingly, the bath oil and perfume repelled this species for roughly two hours.

“There was some previous literature that said fruity, floral scents attracted mosquitoes, and to not wear those,” Rodriquez said. “It was interesting to see that the mosquitoes weren’t actually attracted to the person that was wearing the Victoria’s Secret perfume – they were repelled by it.”

The fragrance may provide a temporary masking effect, the researchers explained. They also clarified that there were high concentrations of perfume applied to the volunteer’s hand, and that lower concentrations may produce different results.

The study found that Asian tiger mosquitoes were also repelled by the perfume. For this species, however, the DEET-free repellents produced mixed reactions, with the Avon Skin So Soft Bug Guard significantly reducing attraction for 120 minutes and the bath oil having no effect.

The skin patch, which claims to repel mosquitoes for up to 36 hours, did not repel either species.

To further this research, Rodriquez and Hansen are in the process of testing mosquito repellent bracelets and clip-on repellent devices, and intend to publish their results in time for next mosquito season.

View the full “Journal of Insect Science” article at http://jinsectscience.oxfordjournals.org/content/15/1/140.