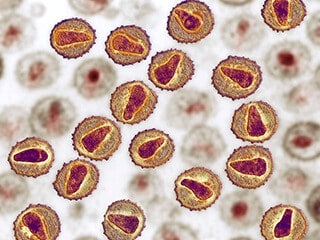 HIV (human immunodeficiency virus) particles, coloured transmission electron micrograph (TEM). Each particle consists of an RNA (ribonucleic acid, red) genome, surrounded by a protein nucleocapsid (coat, yellow). This is enclosed in a matrix of proteins (brown) and the whole virus is enclosed in an envelope (orange). The virus enters CD4+ T-lymphocytes (white blood cells) and hijacks the host cell's machinery to copy itself. The cell dies when the virus clones burst from it, weakening the immune system and causing AIDS (acquired immune deficiency syndrome).

Human longevity has been previously linked by researchers to genetic factors, calorie restriction, and certain life-style factors such as physical activity or the Mediterranean diet. Now, Italian researchers from La Sapienza University in Rome have identified an additional factor, which significantly contributes to a longer life. In a pilot study on some of the oldest people of the world, they discovered that the perfusion of organs and muscles of the centenarians was as efficient as that in people who were 30 years younger. Results of the CIAO (Cilento Intitiative on Aging Outcome) pilot study, presented today in the Italian town of Pollica, suggest that low blood levels of the peptide hormone Adrenomedullin (bio-ADM) are an indicator for such a good microcirculation. Making longevity measurable has long been a scientific goal as it could open up the avenue to a systematic identification of factors contributing to an extended life span.

Prof. Salvatore Di Somma and his team carried out comprehensive health and life style assessments of two study groups that live in the Cilento region, located in the province of Salerno in southern Italy: In the first were 29 so-called ‘SuperAgers’ (median age 92 years), while the second was made up of 52 younger relatives (median age 60 years, living in the same household) who are expected to live just as long because they have the same genetic background and have been exposed to the same environmental and lifestyle factors. Blood biomarker analyses were carried out by the diagnostic company sphingotec (Hennigsdorf, Germany). It measured levels of the heart-function biomarker MR-proANP, as well as a marker for kidney function (penKid) and bio-ADM. The last is a regulator of vasodilation and blood vessel integrity, which both affect blood pressure. The results were compared to those of a cohort of 194 healthy persons (median age 63.9 years), who were monitored over eight years in the earlier Malmö Preventive Project (MPP, Principal Investigator Professor Olle Melander, Lund University, Sweden).

As expected, low values of MR-proANP and penKid among the subjects in the two younger control groups indicated no signs of heart or kidney dysfunction. In contrast, both biomarkers were elevated in the SuperAgers, possibly due to the process of organ aging. However, even though the older group had levels of the two biomarkers that were as high as those found in patients experiencing heart failure (HF) or acute kidney injury (AKI), they were in clinically good condition. Surprisingly, in the group of SuperAgers, the bio-ADM values – which are often pathologically elevated in HF or AKI patients – were as low as those in both reference groups.

“Very low concentrations of this biomarker indicate a well-functioning endothelial and microcirculatory system allowing good blood perfusion of organs and muscles,” concludes Di Somma. A good microcirculation is what makes marathon runners perform better at the same heart rate than the average man or woman on the street.

“We are excited about the connection between bio-ADM levels and a good microcirculation as an indicator for good quality of life”, says sphingotec founder Andreas Bergmann, who was instrumental in developing the bio-ADM assay. “If bio-ADM proves to be a reliable biomarker for longevity this will open up the avenue to a systematic analysis of the factors contributing to longevity”, he adds. “We are excited to contribute to the identification of lifestyle factors ensuring a good microcirculation.”

The researchers are currently planning to extend the pilot study to 2,000 people from the Cilento region. One major goal of the follow-up study is to investigate whether certain components of the local Mediterranean diet could affect the bio-ADM level. The cuisine typical to the region traditionally uses number of plants native to the area. Another idea is to bring people with high bio-ADM levels to Cilento and measure whether the local environment has an effect on levels of the microcirculation biomarker.

The CIAO (Cilento Intitiative on Aging Outcome) study was designed to identify life style, genetic and epigenetic factors contributing to longevity in the Cilento region. With an average life expectancy of 92 years for women (Italian average: 84) and 85 years for men (Italian average: 79), the Cilento has one of the world’s highest concentrations of centenarians – even higher than in Okinawa (Japan), the most intensively investigated centenarian hotspot. The contributors to the current pilot study were identified through local physicians who acquired the informed consent of their patients. A mobile bus equipped with all instrumentation for a comprehensive health assessment was used to visit the study participants. Additionally, blood samples for biomarker analysis were taken and participants were interviewed about their life style habits.

Microcirculation describes blood flow through the smallest vessels (capillaries) in the circulatory system. In these regions, oxygen and nutrients are directly delivered to cells, while metabolic debris, toxins and CO2 are winnowed out. Blood pressure and body temperature is also controlled by the microcirculation through dilation or constriction of the capillary network that penetrates muscles, organs and skin. If put end-to-end, the body’s capillaries would stretch 90,000-110,000 kilometers – more than twice the circumference of Earth. If placed side-by-side, they would cover an area the size of two football fields (500-700 sqm). On average, people have around 200-300 capillaries/mm2, but endurance athletes like runners can have up to 40% more (300-500 capillaries/mm2). This contributes to better muscle perfusion, oxygen supply and performance.

Salvatore Di Somma (63), Professor of Internal Medicine at the University La Sapienza in Rome, is the organizer of the CIAO pilot study. Strong personal links have given him unique access to the population of centenarians living in the Cilento. In previous studies, he identified rosemary as an ethnobotanically conserved part of the local Mediterranean cuisine that might could be contributing to longevity in the region. Conserved gene variants associated with longevity were also identified in Cilento’s population in the Southern Italy Centenarian Study (SICS). The variants affect insulin sensitivity (FOXOA3, CAMMIV), RNA editing (ADARB1+2) and the aromatase pathway (Cyp19, ESR1). Additionally, a unique profile of lipids in the membrane of red blood cells (erythrocytes) was identified in 2008 within the the framework of the SICS study

Centenarian hotspots: Several regions have been identified by National Geographic writer Dan Buettner as longevity hotspots. They include Okinawa (Japan), Sardinia (Italy), Nicoya (Costa Rica), Icaria (Greece) and a group of Seventh-day Adventists living in Loma Linda (US, California). The Cilento, a mountainous region 150 kilometres south from Naples, is another hotspot of centenarians. Although it didn’t earn a mention in Buettner’s book on the so-called “Blue zones” of centenarians, people who live there are getting older than in Okinawa, Japan, the world’s very best-studied longevity hot-spot. Life expectation of women living in the Cilento (92 years) is 8 years above the Italian average; and that of men (85 years) 6 years above, anyway.

Adrenomedullin is a soluble peptide hormone. Mainly released by the inner layer of blood vessels (endothelial cells), its biological function is to control vasodilation, an important regulator of blood pressure and organ perfusion. In several studies involving more than 16.000 patients, the plasma level of the bioactive Adrenomedullin (bio-ADM) has been proven to predict and provide an early diagnosis for circulation dysfunction. For instance, bio-ADM blood levels rise 2-3 days before septic shock occurs. Elevated levels of bio-ADM are a specific indicator of vasodilation and leakage from microcirculatory capillaries, which in sepsis patients subsequently lead to severe hypotension, malperfusion of organs (for which the body can’t compensate by increasing the heart rate), shock and multiple organ failure. Low bio-ADM blood levels, in contrast, are a specific indicator for an intact microcirculation, ensuring good muscle and organ blood supply without any cardiovascular stress.