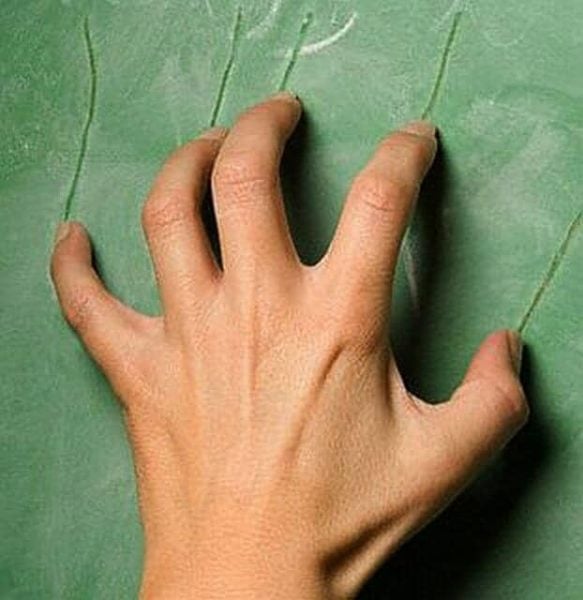 The sound of fingernails on a chalkboard sets many people’s teeth on edge, and now a team of researchers from the University of Cologne in Germany and the University of Vienna in Austria think they know why. In a study designed to pinpoint the source of this and similarly irritating sounds, scientists found that the most obnoxious elements of the noises may be amplified by the shape of the human ear. The team will present its results at the 162nd meeting of the Acoustical Society of America (ASA), which runs from Oct. 31 – Nov. 4 in San Diego, Calif.

In the study, scientists removed information from actual audio clips of people scraping their nails or bits of chalk against a chalkboard. They then played these modified clips to willing participants. Half the study subjects were told what the sounds were; the other half thought that they were listening to selections from contemporary music. Scientists asked the participants to rate each sound’s unpleasantness, and also gauged the subjects’ stress responses to the noises by measuring their blood pressure, heart rate, and skin conductivity (a measure of sweating).

The human ear is known to be particularly sensitive to pitches in the mid- to low-level range of frequencies, between 2000 hertz and 4000 hertz, which is the peak of human hearing. It turns out that when scientists removed all the pitch information in this range from the audio recordings, the study participants rated the noises as more pleasant than other versions of the sounds. One explanation for people’s sensitivity to this band of frequencies is that sounds in this range are amplified due to the anatomy of the ear canal; they are literally louder to us than other sounds are. So chalkboard squeak may be irksome because the most obnoxious elements of the sound sit right in the sweet spot of human hearing.

“We supposed that frequencies in the low-mid range [of human hearing] would play a major role” in the unpleasantness of the sounds, said Michael Oehler, professor of media and music management at the University of Cologne in Germany, who will present his team’s findings at the conference. “But we did not know the exact range. Furthermore, the influence of pitch information was greater than we thought.”

Of potential interest to psychologists is the finding that participants who knew that the sounds they were hearing came from nails on a chalkboard rated these sounds more unpleasant, and experienced a higher degree of sweating, than the people who thought they were listening to music.

The presentation, “Psychoacoustics of chalkboard squeaking,” by Christoph Reuter and Michael Oehler will be at 3:15 p.m. on Thursday, Nov. 3 at the Town and Country Hotel and Convention Center in San Diego, Calif.