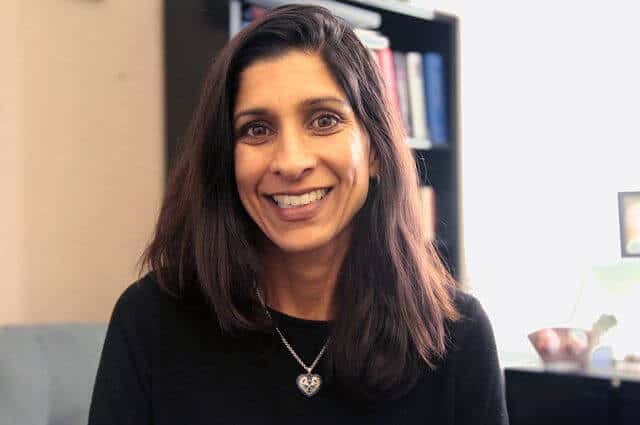 Dr. Shafali Jeste knows well the desperation of a parent seeking a cure for their child with autism spectrum disorder. As a clinician who both researches the causes of the disorder and treats children with autism, Jeste, UCLA associate professor of psychiatry, neurology and pediatrics and a lead investigator in the UCLA Center for Autism Research and Treatment, understands why many parents will try anything that sounds reasonable. A change to a gluten- and casein-free diet to reduce symptoms. Mega-vitamins for the same. Medical marijuana to calm. Melatonin to sleep. Omega-3 fatty acids for hyperactivity. Delaying or refusing vaccinations. All done, usually, in addition to the standard medications that are prescribed to children on the spectrum, including Ritalin, Adderall or Risperdal.

Autism spectrum disorder affects an estimated one in 68 children in the United States. It’s a “spectrum” because symptoms range from a child with signifcant intellectual disabilities, including problems with speech, attention, memory and/or repetitive behaviors, to those who have average or above-average intelligence, but who struggle with social skills.

“The short answer is there simply isn’t enough solid scientific evidence to say definitely one way or the other whether most of the alternative treatments help or harm,” Jeste said.

The following is a summary of some of the most popular therapies for which evidence is inconclusive:

Sleep disorders are common in children with autism. “There has been some solid research on the use of melatonin, a neurohormone made naturally by our bodies,” Jeste said. Evidence suggests that autism may disrupt the synthesis of natural melatonin or impact melatonin cell receptors in the body.  Clinical trials have shown that melatonin can help children with autism fall asleep. However, sometimes melatonin is used in doses too low to be effective as a sleep therapy, said Jeste, who recommends that parents talk to their physician about appropriate dosage.

The gluten- and casein-free diet (casein is a protein found in milk) is a popular choice with many families, Jeste said. “Only a few small studies have been done, and they showed very little change in symptoms. There have been a few cases reported where a child’s aggression has been calmed a bit.” The calming effect may be because these diets are reducing sugar in the child’s diet, she said. However, the diet can be costly and can represent a significant burden on families, having to shop at different stores to buy foods that are appropriate.

They are a common and popular supplement providing the “good” bacteria that may correct any imbalance in the gut’s bacterial makeup. There are no large-scale clinical trials that support a benefit, Jeste said. Besides their cost, no harm has been shown to be associated with taking these supplements.

Jeste doesn’t endorse the use of medical marijuana for autism at this time. She worries about the possible negatives, including cognitive side effects, sleepiness and over time, withdrawal. “But I do understand why it’s being used. There are anecdotes about its effectiveness in certain capacities, to improve sleep, and reduce tantrums and irritability.” Medical marijuana is being studied actively for use in epilepsy, and it may have benefit in certain types of epilepsy syndromes.

Jeste has no tolerance for those who would promote therapies that lack any scientific basis, such as one doctor she heard about who promoted EEGs, or electroencephalograms, as a “cure.” EEG is a test that detects electrical activity in a person’s brain using small electrodes that are placed on the scalp. It’s a tool only — one Jeste uses in her research — but it is not a treatment.

The autism theory most upsetting to Jeste and some other researchers is the idea of a link between childhood vaccines and autism. That now-debunked theory started in 1998, when a then-doctor named Andrew Wakefield published a study in the British journal the Lancet purporting to show a link between vaccines and autism. The study was later identified as fraudulent, was retracted by the medical journal, and his medical license was revoked.

“I think one reason this myth persists is that many symptoms of autism begin to emerge right around the same time that vaccines are given to children,” Jeste said.

The lack of a cure

Jeste recognizes the frustration parents feel. Drugs that can be prescribed for autism only treat symptoms, not the cause. There is no cure.

“Autism is not one disorder; it’s heterogeneous,” she said. The lack of a cure is why she has empathy for parents who will try alternative treatments.

But not only is there little research supporting these alternatives, but some of the therapies are costly. It’s better to focus on therapies, such as behavioral interventions, for which there is evidence of a benefit, Jeste said.

One example of a behavioral therapy is one that focuses on the social communication deficits in young children with autism. It’s called “Jasper,” short for Joint Attention, Symbolic Play, Engagement and Regulation, and was developed by Jeste’s colleague, Connie Kasari.

While it’s thought that environmental factors may play some role — Jeste pointed out that the age of the parents, maternal drug use, extreme premature birth, in utero hormonal environment — her research and that of others shows that genetic variations are responsible for the majority of all diagnosed cases.

In her research Jeste searches for biomarkers that would identify autism in the youngest of patients, even babies. She is part of a nationwide, multi-center study examining preschool and school-aged children with autism spectrum disorders to identify biomarkers that could help physicians diagnose and track the disease as well as assess treatments in autism patients.

Diagnostics and genetic-testing tools are improving rapidly, Jeste said, and will enable scientists to better understand the role of single genes in disrupted brain development. “These studies will guide more targeted therapeutics that will have more of a chance for success,” she said.  “I’m very encouraged about the future.”