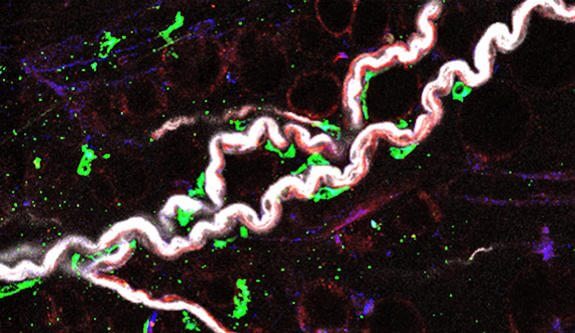 In a new study, Yale researchers have described how nervous systems and immune systems talk to each other to control metabolism and inflammation. Their finding furthers scientists’ understanding of why older adults fail to burn stored belly fat, which raises the risk of chronic disease. The study also points to potential therapeutic approaches to target the problem, the researchers said.

Led by Vishwa Deep Dixit, professor of comparative Medicine and immunobiology, the study was published Sept. 27 in Nature.

Older adults, regardless of body weight, have increased belly fat. However, when they need to expend energy, older people do not burn the energy stored in fat cells as efficiently as younger adults, leading to the accumulation of harmful belly fat. The underlying cause for this unresponsiveness in fat cells was unknown.

In the study, Dixit and his collaborators at Yale, University of Tennessee Health Science Center, and University of Bonn focused on specialized immune cells known as macrophages, which are typically involved in controlling infections. The Dixit lab discovered a new type of macrophage that resides on the nerves in belly fat. These nerve-associated macrophages become inflamed with age and do not allow the neurotransmitters, which are chemical messengers, to properly function.

The researchers also isolated the immune cells from fat tissue of young and old mice, and together with Professor Schultze and his team at the Life and Medical Sciences Institute of the University of Bonn, Germany then sequenced and computationally modelled the genome to understand the problem. “We discovered that the aged macrophages can break down the neurotransmitters called catecholamines, and thus do not allow fat cells to supply the fuel when demand arises,” said Dixit, who is also a member of the Yale Center for Research on Aging.

The researchers found that when they lowered a specific receptor that controls inflammation, the NLRP3 inflammasome, in aged macrophages, the catecholamines could act to induce fat breakdown, similar to that of young mice.

“The key finding is that the immune cells talk to the nervous system to control metabolism,” said Dixit.

In further experiments, the researchers blocked an enzyme that is increased in aged macrophages, restoring normal fat metabolism in older mice. Dixit noted that this enzyme, monoamine oxidase-A or MAOA, is inhibited by existing drugs in the treatment of depression. “Theoretically one could repurpose these MAOA inhibitor drugs to improve metabolism in aged individuals,” he said. But he also cautioned that more research is needed to specifically target these drugs to belly fat and to test the safety of this approach.

In future research, Dixit and his colleagues will further examine the immune cells and their interaction with nerves, and how this neuro-immune dialogue controls health and disease. If controlling inflammation in aging immune cells can improve metabolism, it may have other positive effects on the nervous system or on the process of aging itself, said the researchers.

“The purpose of our research is to achieve greater understanding of immune cell interactions with nerves and fat cells to potentially reduce belly fat, enhance metabolism, and improve performance in the elderly,” said Christina D. Camell, the first author of the study.

The study was supported in part by National Institutes of Health grants, the Glenn Foundation for Medical Research, and Cure Alzheimer’s Fund to Dixit Laboratory.