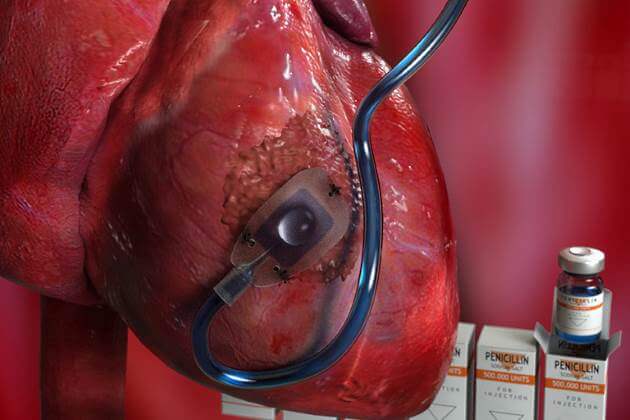 What if drugs and other therapies to treat diseased or scarred tissues could be repeatedly delivered directly to their targets without the need for multiple procedures?

Now, an international team of researchers led by Harvard University have demonstrated a new, implantable device that can sit directly on the heart and deliver drugs on a continual basis to treat the aftereffects of a heart attack.  This localized delivery system, shown to be effective in an in vivo pre-clinical study, could improve the efficiency of drugs, requiring lower doses, and reduce adverse side effects for therapies that are currently delivered systemically.

The research is published in Nature Biomedical Engineering.

“This proof-of-concept study demonstrates that our device can repeatedly deliver drugs and increase retention of cells in proximity to the heart to increase heart function,” said Ellen Roche, co-first author of the paper and former PhD student at the Harvard John A. Paulson School of Engineering and Applied Sciences (SEAS) and the Wyss Institute for Biologically Inspired Engineering at Harvard University.  “For us, this is only the beginning of multiple ongoing studies that will use this system as a platform for therapy delivery to diseased tissue, and as a research tool to understand the effects of a localized, replenishable treatment regimen at various pathological sites.”

Roche is currently an Assistant Professor at the Massachusetts Institute of Technology. She was co-advised by David Mooney, the Robert P. Pinkas Family Professor of Bioengineering at SEAS and Conor Walsh, the John L. Loeb Associate Professor of Engineering and Applied Sciences at SEAS. Mooney and Walsh are also Core Faculty Members of the Wyss Institute. Mooney, Walsh and Garry Duffy, of the National University of Ireland Galway & AMBER, the Science Foundation Ireland funded materials science center, are co-senior authors of the paper.

The device, dubbed Therepi, looks like a small patch and can be sutured onto tissue, in this case, a heart. The patch contains a sponge-like biomaterial that holds and releases therapies through its permeable surface. The biomaterial can be connected to a port or pump via a tube when it needs to be refilled. The permeable surface, made of a porous polycarbonate membrane, can be tuned for different size molecules and interchanged for smaller or larger pore sizes depending on what is being delivered and how quickly it should be released.

The Harvard Office of Technology Development has protected the intellectual property relating to this project and is exploring commercialization opportunities.

In in vivo experiments, the researchers used the device to deliver cardiac regenerative therapy. After a heart attack, residual scarring and tissue remodeling can occur and may ultimately lead to heart failure. Different therapies, including drugs, proteins and stem cells, could treat scarring but these treatments struggle to stay at their intended target, often require multiple doses, and could lead to toxic side effects.

Stem cells are one of the most promising avenues of treatment for cardiac scarring but so far, clinical trials have shown only modest benefits, in part because there is no reliable method to deliver multiple doses of stem cells without multiple surgeries.

That’s where Therepi comes in.

In a pre-clinical 28-day study, the researchers demonstrated that Therepi can increase heart function after injury for up to four weeks when stem cells are repeatedly delivered to the reservoir.

“The stem cells remain in the reservoir and act as production factories, constantly releasing factors that are transported out of the device and modulate healing,” said Roche. “With multiple replenishments, the ’dose’ of these factors is increased, as is their potential to elicit a functional benefit. At 28 days, we observed, among other cardiac parameters, an increased ejection fraction, meaning the percentage of blood ejected compared to total volume of chamber increased.”

“As a pharmacist by training, I’m really excited to start investigating what the best dose is, when is the best time to deliver after a heart attack, and how many doses are needed to achieve the desired therapeutic effect,” said William Whyte, co-first author and PhD candidate at Trinity College Dublin and AMBER.

Before moving onto clinical implementation, the researchers will focus on optimizing the design of the device for a variety of potential therapies that can be delivered with this system. The team is also exploring the potential to combine this approach with past work on soft robotic extra-cardiac assistive devices, to create a multifaceted mechanical and therapeutic approach to heart disease.

“Practically, this platform will allow us to conduct tightly controlled studies to find optimal dosing and timing regimens for regenerative cardiac therapies,” said Roche. “Until now, these studies have been challenging due to the invasiveness of multiple procedures. This type of device could be applied to treatment options for multiple disease states including other types of heart disease, diabetes and cancer.”

The paper was co-authored by Keegan Mendez and James Weaver, of SEAS and Wyss, Claudia Varela and Shahrin Islam, of MIT, Hugh O’Neill, of the Royal College of Surgeons in Ireland, Fiona Weafer, Reyhaneh Neghabat Shirazi, and Peter E. McHugh, of the National University of Ireland Galway, Nikolay V. Vasilyev, of Boston Children’s Hospital and Bruce Murphy, of Trinity College in Dublin and AMBER.

The research was supported in part by the Wyss Institute, Harvard Paulson School of Engineering and Applied Science, the Institute for Medical Engineering Science at the Massachusetts Institute of Technology and the Science Foundation Ireland.