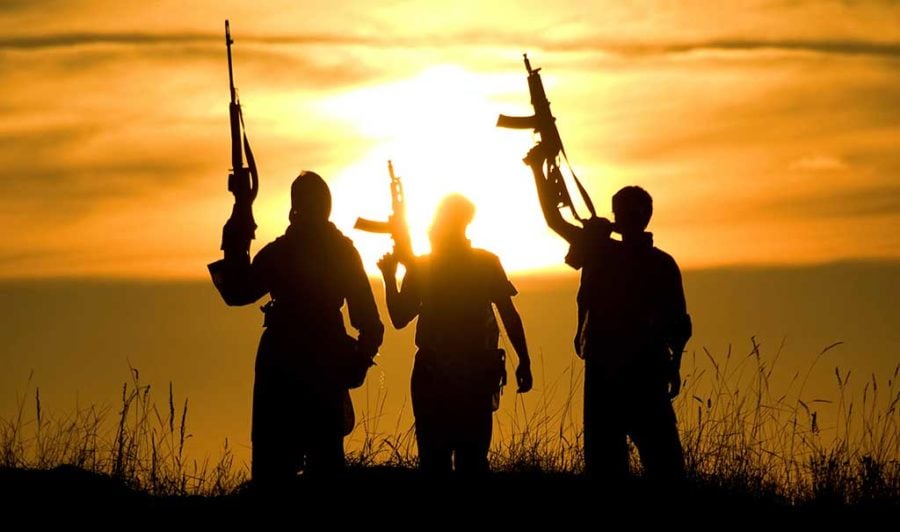 Major trading countries like the United States or trading blocs like the European Union are targets of terrorist organizations. Typically, these groups, such as al-Qaida or ISIS, locate in developing countries that lack the resources to stop them from operating. During the last two decades, this resource scarcity is often complemented by radical ideologies that can be more easily implanted among disaffected people, thereby supplying terrorist recruits. As a consequence, terrorist hotbeds result in remote and difficult-to-govern areas like Afghanistan, Pakistan, Somalia, Syria, and Yemen. To protect against such attacks, targeted countries deploy defensive counterterrorism measures at home, which deflect attacks abroad. In addition, terrorism disrupts the production of goods and services in an economy. These production considerations affect global supply and demand of goods, thus changing trade patterns and the prices of imports and exports.

With their limited means, terrorist organizations target both types of countries. Greater defensive counterterrorism by either country reduces terrorism at home, but potentially increases it in the other country as the terrorist group redirects its attacks. Such defensive measures may take the form of enhanced border security and greater surveillance.

Counterterrorism limits the production of manufactured goods through demand for closely related resources. Guns, surveillance cameras, helicopters, police vehicles, communication grids, and other manufactured goods are required for effective defensive counterterrorism efforts. Defensive measures also require labour in terms of guards and police, who must have equipment to protect potential targets and to coordinate defensive operations.

When deciding which defensive counterterrorism measures to pursue, the developing country must weigh trade loss against its gain from containing terrorism at home. The opposite is true for the developed country, whose independent defensive choice not only augments the country’s trade position as manufactured goods, which it produces, become relatively more expensive, but also deflects potential attacks abroad. Thus, the developed country has an incentive to increase its defensive measures. This asymmetry is a novel finding. The prognosis for global welfare thus is better if the developing country is more afflicted by terrorism, so that its initial overprovision is relatively greater than that of the developed country.

Next, consider proactive counterterrorism measures which limit terrorist resources and prowess and are usually undersupplied by targeted countries. The developed country is now incentivized to increase its proactive efforts relative to the small-country case. Since it both produces and benefits from manufactured security goods, it will benefit from producing more of them. The developing country, however, is incentivized to decrease its substandard proactive efforts. However, the global welfare implications are now different as the developed country does more to address its underprovision for the sake of both security and economic gains, which can improve global welfare.

The longer term impact of these measures cause exported primary goods to get cheaper. This asymmetry between the proactive measures of the targeted countries highlights how trade adds a novel consideration that results in somewhat more optimistic welfare findings.

“This article shows that counterterrorism must be investigated in a way that accounts for subtle, but important, trade consequences,” said one of the paper’s authors, Todd Sandler.

The paper, “Terms-of-trade and counterterrorism externalities,” is available (at midnight EST on May 7) at: https://doi.org/10.1093/oep/gpz037