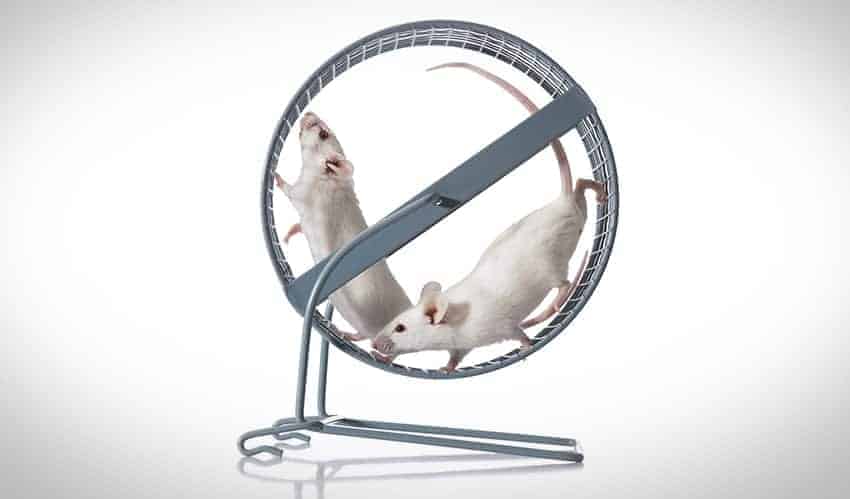 Sugars and fats are the primary fuels that power every cell, tissue and organ. For most cells, sugar is the energy source of choice, but when nutrients are scarce, such as during starvation or extreme exertion, cells will switch to breaking down fats instead.

The mechanisms for how cells rewire their metabolism in response to changes in resource availability are not yet fully understood, but new research reveals a surprising consequence when one such mechanism is turned off: an increased capacity for endurance exercise.

In a study published in the Aug. 4 issue of Cell Metabolism, Harvard Medical School researchers identified a critical role of the enzyme, prolyl hydroxylase 3 (PHD3), in sensing nutrient availability and regulating the ability of muscle cells to break down fats. When nutrients are abundant, PHD3 acts as a brake that inhibits unnecessary fat metabolism. This brake is released when fuel is low and more energy is needed, such as during exercise.

Remarkably, blocking PHD3 production in mice leads to dramatic improvements in certain measures of fitness, the research showed. Compared with their normal littermates, mice lacking the PHD3 enzyme ran 40 percent longer and 50 percent farther on treadmills and had higher VO2 max, a marker of aerobic endurance that measures maximum oxygen uptake during exercise.

The findings shed light on a key mechanism for how cells metabolize fuels and offer clues toward a better understanding of muscle function and fitness, the authors said.

“Our results suggest that PHD3 inhibition in whole body or skeletal muscle is beneficial for fitness in terms of endurance exercise capacity, running time and running distance,” said senior study author Marcia Haigis, professor of cell biology in the Blavatnik Institute at HMS. “Understanding this pathway and how our cells metabolize energy and fuels potentially has broad applications in biology, ranging from cancer control to exercise physiology.”

However, further studies are needed to elucidate whether this pathway can be manipulated in humans to improve muscle function in disease settings, the authors said.

Haigis and colleagues set out to investigate the function of PHD3, an enzyme that they had found to play a role regulating fat metabolism in certain cancers in previous studies. Their work showed that, under normal conditions, PHD3 chemically modifies another enzyme, ACC2, which in turn prevents fatty acids from entering mitochondria to be broken down into energy.

In the current study, the researchers’ experiments revealed that PHD3 and another enzyme called AMPK simultaneously control the activity of ACC2 to regulate fat metabolism, depending on energy availability.

In isolated mouse cells grown in sugar-rich conditions, the team found that PHD3 chemically modifies ACC2 to inhibit fat metabolism. Under low-sugar conditions, however, AMPK activates and places a different, opposing chemical modification on ACC2, which represses PHD3 activity and allows fatty acids to enter the mitochondria to be broken down for energy.

These observations were confirmed in live mice that were fasted to induce energy-deficient conditions. In fasted mice, the PHD3-dependent chemical modification to ACC2 was significantly reduced in skeletal and heart muscle, compared to fed mice. By contrast, the AMPK-dependent modification to ACC2 increased.

Next, the researchers explored the consequences when PHD3 activity was inhibited, using genetically modified mice that do not express PHD3. Because PHD3 is most highly expressed in skeletal muscle cells and AMPK has previously been shown to increase energy expenditure and exercise tolerance, the team carried out a series of endurance exercise experiments.

“The question we asked was if we knock out PHD3,” Haigis said, “would that increase fat burning capacity and energy production and have a beneficial effect in skeletal muscle, which relies on energy for muscle function and exercise capacity?”

To investigate, the team trained young, PHD3-deficient mice to run on an inclined treadmill. They found that these mice ran significantly longer and further before reaching the point of exhaustion, compared to mice with normal PHD3. These PHD3-deficient mice also had higher oxygen consumption rates, as reflected by increased VO2 and VO2 max.

These observations held true in mice genetically modified to specifically prevent PHD3 production in skeletal muscle, demonstrating that PHD3 loss in muscle tissues is sufficient to boost exercise capacity, according to the authors.

“It was exciting to see this big, dramatic effect on exercise capacity, which could be recapitulated with a muscle-specific PHD3 knockout,” Haigis said. “The effect of PHD3 loss was very robust and reproducible.”

The research team also performed a series of molecular analyses to detail the precise molecular interactions that allow PHD3 to modify ACC2, as well as how its activity is repressed by AMPK.

The study results suggest a new potential approach for enhancing exercise performance by inhibiting PHD3. While the findings are intriguing, the authors note that further studies are needed to better understand precisely how blocking PHD3 causes a beneficial effect on exercise capacity.

In addition, Haigis and colleagues found in previous studies that in certain cancers, such as some forms of leukemia, mutated cells express significantly lower levels of PHD3 and consume fats to fuel aberrant growth and proliferation. Efforts to control this pathway as a potential strategy for treating such cancers may help inform research in other areas, such as muscle disorders.

It remains unclear whether there are any negative effects of PHD3 loss. To know whether PHD3 can be manipulated in humans—for performance enhancement in athletic activities or as a treatment for certain diseases —will require additional studies in a variety of contexts, the authors said.

It also remains unclear if PHD3 loss triggers other changes, such as weight loss, blood sugar and other metabolic markers, which are now being explored by the team.

“A better understanding of these processes and the mechanisms underlying PHD3 function could someday help unlock new applications in humans, such as novel strategies for treating muscle disorders,” Haigis said.