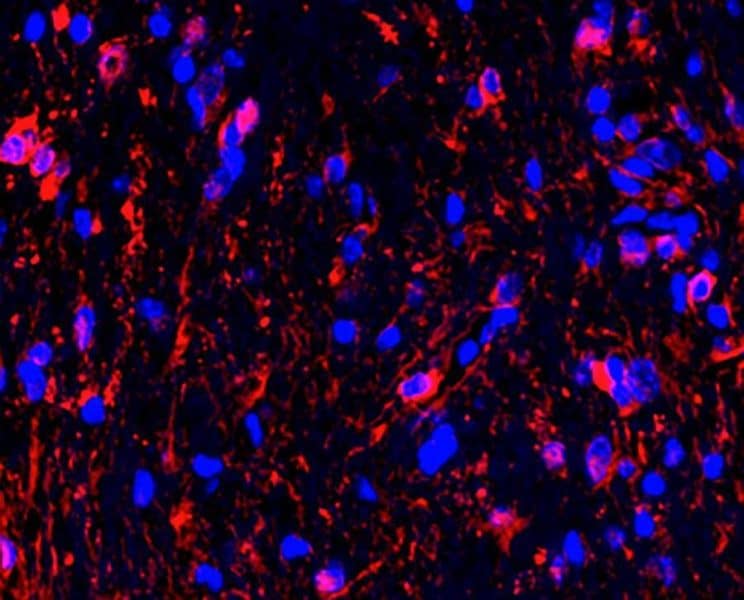 “Brain cancers recruit the resources they need from the environment they are in.”

In a study of mice, researchers showed how the act of seeing light may trigger the formation of vision-harming tumors in young children who are born with neurofibromatosis type 1 (NF1) cancer predisposition syndrome. The research team, funded by the National Institutes of Health, focused on tumors that grow within the optic nerve, which relays visual signals from the eyes to brain. They discovered that the neural activity which underlies these signals can both ignite and feed the tumors. Tumor growth was prevented or slowed by raising young mice in the dark or treating them with an experimental cancer drug during a critical period of cancer development.

“Brain cancers recruit the resources they need from the environment they are in,” said Michelle Monje, M.D., Ph.D., associate professor of neurology at Stanford University, Palo Alto, California, and co-senior author of the study published in Nature. “To fight brain cancers, you have to know your enemies. We hope that understanding how brain tumors weaponize neural activity will ultimately help us save lives and reduce suffering for many patients and their loved ones.”

The study was a joint project between Dr. Monje’s team and scientists in the laboratory of David H. Gutmann, M.D., Ph.D., the Donald O. Schnuck Family Professor and the director of the Neurofibromatosis Center at the Washington University School of Medicine in St. Louis.

In 2015, Dr. Monje’s team showed for the first time that stimulation of neural activity in mice can speed the growth of existing malignant brain tumors and that this enhancement may be controlled by the secretion of a protein called neuroligin-3. In this new study, the researchers hoped to test out these ideas during earlier stages of tumor development.

“Over the years, cancer researchers have become more and more focused on the role of the tumor microenvironment in cancer development and growth. Until recently, neuronal activity has not been considered, as most studies have focused on immune and vascular cell interactions,” said Jane Fountain, Ph.D., program director at the NIH’s National Institute of Neurological Disorders and Stroke (NINDS), which partially funded the study. “This study is one of the first to show a definitive role for neurons in influencing tumor initiation. It’s both scary and exciting to see that controlling neuronal activity can have such a profound influence on tumor growth.”

Specifically, the researchers chose to study optic nerve gliomas in mice. Gliomas are formed from newborn cells that usually become a type of brain cell called glia. The tumors examined in this study are reminiscent of those found in about 15-20% of children who are born with a genetic mutation that causes NF1. About half of these children develop vision problems.

Dr. Gutmann helped discover the disease-causing mutation linked to NF1 and its encoded protein, neurofibromin, while working in a lab at the University of Michigan, Ann Arbor, which was then led by the current NIH director, Francis S. Collins, M.D., Ph.D. Since then, the Gutman team’s pioneering work on NF1, and particularly NF1-brain tumors, has greatly shaped the medical research community’s understanding of low-grade glioma formation and progression.

“Based on multiple lines of converging evidence, we knew that these optic nerve gliomas arose from neural precursor cells. However, the tumor cells required help from surrounding non-cancerous cells in the optic nerve to form gliomas,” said Dr. Gutmann, who was also a senior author of this study. “While we had previously shown that immune cells, like T-cells and microglia, provide growth factors essential for tumor growth, the big question was: ‘What role did neurons and neural activity play in optic glioma initiation and progression?’”

To address this, the researchers performed experiments on mice engineered by the Gutmann laboratory to generate tumors that genetically resembled human NF1-associated optic gliomas. Typically, optic nerve gliomas appear in these mice between six to sixteen weeks of age.

Interestingly, the exact timing of the dark period also appeared to be important. For instance, two out of nine mice developed tumors when they were raised in the dark beginning at twelve weeks of age.

“These results suggest there is a temporal window during childhood development when genetic susceptibility and visual system activity critically intersect. If a susceptible neural precursor cell receives the key signals at a vulnerable time, then it will become cancerous. Otherwise no tumors form,” said Yuan Pan, Ph.D., a post-doctoral fellow at Stanford and the lead author. “We needed to understand how this happens at a molecular level.”

Further experiments supported the idea that neuroligin-3 may be a key player in this process. For instance, the scientists found high levels of neuroligin-3 gene activity in both mouse and human gliomas. Conversely, silencing the neuroligin-3 gene prevented tumors from developing in the neurofibromatosis mice.

Traditionally, neuroligin-3 proteins are thought to act like tie rods that physically brace neurons together at communication points called synapses. In this study, the researchers found that the protein may work differently. The optic nerves of neurofibromatosis mice raised under normal light conditions had higher levels of a short, free-floating version of neuroligin-3 than the nerves of mice raised in the dark.

Finally, the researchers showed that an experimental drug may be effective at combating gliomas. The drug is designed to block the activity of ADAM10, a protein that is important for neuroligin-3 shedding. Treating the neurofibromatosis mutant mice with the drug during the critical period of six to sixteen weeks after birth prevented the development of tumors. Treatment delayed to twelve weeks did not prevent tumor formation but reduced the growth of the optic gliomas.

Dr. Monje’s team is currently testing neuroligin-3-targeting drugs and light exposure modifications that may in the future help treat patients with this form of cancer.