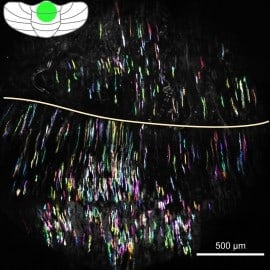 Choreographing the body’s more-than 600 muscles to produce accurate, consistent movements is one of the brain’s most important jobs. Even the simplest actions — like reaching out to press a button or pick up a pencil — require precise coordination of dozens of different muscles, all acting at just the right time to send your hand where it needs to go.

New research by scientists at the Wu Tsai Neuroscience Institute has identified a dramatic shift in brain activity that appears to orchestrate the timing of skilled movements like a neural ‘conductor’ — demonstrating a novel kind of self-organization in the brain.

The research, published July 1, 2021 in the journal Cell, explored how cells in part of the brain called the cerebellum learn to coordinate precisely timed movements by training mice to operate a custom-designed robotic lever and observing the resulting learning process inside the brain.

The researchers took advantage of a newly developed imaging technique that let them monitor the activity of hundreds of individual cerebellar neurons, called Purkinje cells, as animals learned to operate the device over the course of a week. At first, the cells all fired at random times relative to one another, but as the mice learned to operate the lever, cells involved in movement of the arm operating the lever began firing in synchrony — producing unified bursts of activity right around the onset of the animals’ movements, followed by a concerted silence.

“The shift we observed in the brain, from disorder to order, is mathematically analogous to certain phase transitions that occur between different condensed states of physical matter,” said Mark Schnitzer, PhD, a professor of biology and applied physics and Howard Hughes Medical Institute investigator who was the study’s senior author. “Naturally we wanted to understand how nerve cells, which traditionally have been thought to communicate information via a continuum of slow to fast firing rates, could coordinate such a sharp behavioral switch.”Remarkably, the ability of these neurons to fire in sync was closely linked to the animals’ learning: the more synchronized the activity in an animal’s brain, the more stereotyped and well-targeted their operation of the robotic lever.

Further experiments showed that with learning, many previously independent cerebellar neurons came to act as a coherent network: for example, responding collectively when an animal’s practiced movement was unexpectedly deflected to one side by the robotic arm, and producing coordinated waves of activity across several millimeters of the cerebellar surface that correlated with animal’s proficiency with the robotic lever.

To understand the origin of this remarkable shift in coordinated activity, the researchers looked to the inferior olive, a nearby brain region whose name belies its critical role in cerebellar motor learning.  The type of spikes the team had been observing — lighting up the large, flat, antenna-like dendrites of Purkinje neurons at the surface the cerebellum — are known to be driven by so-called “climbing fiber” inputs: long nerve fibers from the olive that wind around Purkinje cell dendrites like vines on a trellis.

But the resulting Purkinje cell spikes also find their way back to the olive, via an intermediate stop in the so-called deep cerebellar nuclei. The researchers wondered if this 3-step closed circuit might be responsible for controlling the development of synchronized activity as animals learned complex movements.

The team confirmed this hypothesis using optogenetic techniques from the lab of collaborator Karl Deisseroth, MD, PhD, to alter the signals from the deep cerebellar nuclei back to the olive — showing that they could indirectly alter the synchrony of cerebellar spiking accompanying animals’ movement of the robotic lever.

“The key question was: how does the olive coordinate this sharp transition from disorganized firing to near perfect synchrony in the cerebellum,” said Mark Wagner, PhD, who initiated the research as a graduate student in Schnitzer’s lab and continued to spearhead the work as a postdoc in the lab of Liqun Luo, PhD, in the Department of Biology.

Inferior olive neurons are linked together via an electrical synapse network unlike anything else in the brain, and their internal voltage naturally oscillates. Normally, olive neurons oscillate independently of one another, producing uncorrelated spiking in the cerebellum, but something about the input from the deep cerebellar nuclei causes them to snap into sudden synchrony.

To understand how this occurs, Wagner and theoretical neuroscientist Surya Ganguli, PhD, turned to decades-old computational models that have been used to describe all sorts of naturally occurring synchrony in networks of “coupled oscillators.” These models showed that the deep nuclei inputs can trigger synchronous firing in the olive simply by their ability to enhance the electrical coupling between olivary neurons via so-called electrical shunting.

“It turns out that the simplest possible model of so-called coupled oscillators, like these olivary neurons, gets you sharp phase transitions for free,” explained Ganguli, an associate professor of applied physics. “It’s exactly the same phenomena that allows fireflies to all flash at the same time and how an audience at a sports arena will often end up clapping in unison.”

Notably, these models also explained the waves of synchronized firing the researchers had observed on the cerebellar surface, which results from the fact that inferior olive neurons are more tightly coupled to their nearest neighbors and more loosely coupled to more distant cells.

The new findings illustrate the importance of new methodologies for studying the behaviors of large groups of cells, such as the Schnitzer group’s recently developed wide-field, high resolution two-photon mesoscope, which allowed the researchers to observe the activity of hundreds of individual Purkinje cells across several millimeters of the cerebellar surface. “This is something we could never have observed studying cells one at a time,” Schnitzer said.

The research also illuminates a new understanding of how the brain learns and enacts complex new skills — dynamically transforming the seemingly chaotic firing of its billions of neurons into crystalline unity at just the right moment.

“I have always been fascinated by how flexibly the brain can learn and switch between different skills,” said Wagner. “The machine learning algorithms I studied as an undergraduate engineering major are notoriously bad at this kind of flexibility, so to me it still seems almost magical how we can immediately transition between completely different tasks without having to take out the brain and put in a new one. Instead, the brain is able to carve out space within existing networks to learn something completely different.”