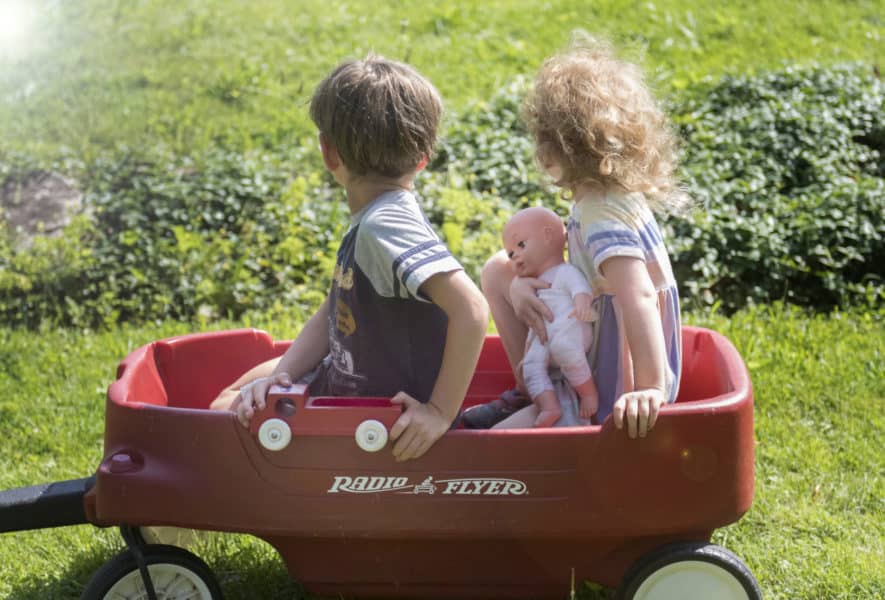 According to the researchers, so-called childhood gender role behaviors are among the largest behavioral sex differences. Typically, male adults will say they were the male character, played with other boys and preferred trucks, while female adults will say they were the female character, played with other girls and preferred dolls. IMAGE: PATRICK MANSELL, PENN STATE

In laboratory animals, sex differences in behavior occur because different hormone levels produced by males and females influence patterns of gene expression in the developing brain. However, the origins of sex differences in human behavior are not as well understood, according to a team of researchers.

“In the lab, you can do experiments on how these hormones effect animal brains and perform other experimental manipulations,” said David Puts, associate professor of anthropology. “We can’t do those things to people, so we looked to a natural experiment.”

The natural experiment studied by Puts and his collaborators is isolated GnRH deficiency (IGD), a rare endocrine disorder. Individuals with IGD lack sex hormones beginning in the second trimester of development and continuing until they begin hormone replacement therapy to induce puberty.

However, because the external genitals develop earlier, during the first trimester, people with IGD are unambiguously male or female at birth and are raised in a manner consistent with their chromosomal and apparent sex. Their condition is usually detected when they fail to start puberty.

The researchers looked at 97 individuals with IGD and 1665 individuals with typical hormonal development. The researchers recruited IGD subjects through collaborations at Massachusetts General Hospital, Harvard Medical and the National Institute of Child Health and Human Development and from online support groups for people with IGD. Because only one in 130,000 people has IGD the number of IGD subjects was necessarily low. By comparing the two groups, the researchers attempted to isolate the direct influence of sex hormones on the developing brain from the influence of gender socialization — boys being encouraged toward active play, girls pushed to more passive pursuits, for example — because all subjects would have been similarly socialized according to their physical sex.

The researchers asked subjects to recall behaviors they had as children.

“We asked them, ‘When you read a book, were you the male or female in the story?’, ‘Where your friends boys or girls?’, ‘Did you play with dolls or trucks?’,” said Talia N. Shirazi, doctoral recipient in anthropology now working in the reproductive health industry.

According to Puts, such so called childhood gender role behaviors are among the largest behavioral sex differences. Typically, males will say they were the male character, played with other boys and preferred trucks, while females will say they were the female character, played with other girls and preferred dolls.

‘”We don’t see this effect in the women with IGD,” said Shirazi.

This indicates that having low levels of ovarian hormones such as estrogen does not have a large effect on childhood gender role behaviors, she added.

“Our results suggest that in humans, androgens, such as testosterone produced by the testes, influence male brain development directly as they do in other mammals, rather than only indirectly by influencing external appearance and consequently gender socialization,” said Puts. “Both the direct influence of androgens on the developing brain and gender socialization probably play important roles in producing sex differences in childhood behavior.”

Puts and Shirazi agree that despite their modest sample of participants with IGD, they are encouraged that the results were very similar in subjects who came from a clinical setting and those recruited from support groups.

“It would be nice to be able to identify people with IGD when they are younger, before they reach what should be puberty,” said Shirazi. “We need to focus on recruitment for our studies because there is a lot that can be learned about the cause of gender behaviors.”