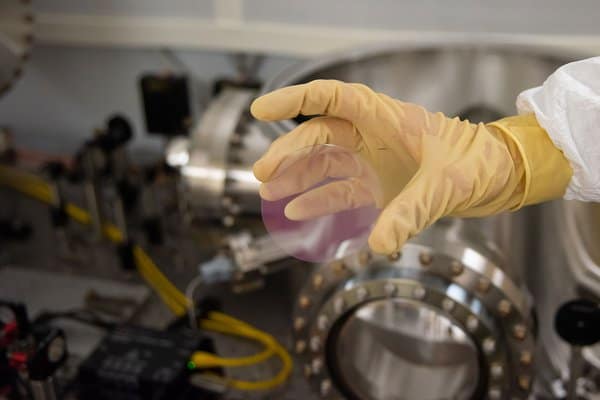 Researchers test coatings for the LIGO mirrors by depositing them on glass disks that are smaller than the real mirrors, and therefore easier to handle. One of those test disks is shown here being taken out of its storage container.

Since LIGO’s groundbreaking detection, in 2015, of gravitational waves produced by a pair of colliding black holes, the observatory, together with its European partner facility Virgo, has detected dozens of similar cosmic rumblings that send ripples through space and time.

In the future, as more and more upgrades are made to the National Science Foundation-funded LIGO observatories—one in Hanford, Washington, and the other in Livingston, Louisiana—the facilities are expected to detect increasingly large numbers of these extreme cosmic events. These observations will help solve fundamental mysteries about our universe, such as how black holes form and how the ingredients of our universe are manufactured.

One important factor in increasing the sensitivity of the observatories involves the coatings on the glass mirrors that lie at the heart of the instruments. Each 40-kilogram (88-pound) mirror (there are four in each detector at the two LIGO observatories) is coated with reflective materials that essentially turn the glass into mirrors. The mirrors reflect laser beams that are sensitive to passing gravitational waves.

“We wanted to find a material at the edge of what is possible today,” says Gabriele Vajente, a LIGO senior research scientist at Caltech and lead author of a paper about the work that appears in the journal Physical Review Letters. “Our ability to study the astronomically large scale of the universe is limited by what happens in this very tiny microscopic space.”

“With these new coatings, we expect to be able to increase the detection rate of gravitational waves from once a week to once a day or more,” says David Reitze, executive director of LIGO Laboratory at Caltech.

The research, which may have future applications in the fields of telecommunications and semiconductors, was a collaboration between Caltech; Colorado State University; the University of Montreal; and Stanford University, whose synchrotron at the SLAC National Accelerator Laboratory was used in the characterization of the coatings.

LIGO detects ripples in space-time using detectors called interferometers. In this setup, a powerful laser beam is split into two: each beam travels down one arm of a large L-shaped vacuum enclosure toward mirrors 4 kilometers away. The mirrors reflect the laser beams back to the source from which they originated. When gravitational waves pass by, they will stretch and squeezes space by nearly imperceptible and yet detectable amounts (much less than the width of a proton). The perturbations change the timing of the arrival of the two laser beams back at the source.

Any jiggling in the mirrors themselves—even the microscopic thermal vibrations of the atoms in the mirrors’ coatings—can affect the timing of the laser beams’ arrival and make it hard to isolate the gravitational-wave signals.

“What’s important about this work is that we developed a new way to better test the materials,” says Vajente. “We can now test the properties of a new material in about eight hours, completely automated, when before it took almost a week. This allowed us to explore the periodic table by trying a lot of different materials and a lot of combinations. Some of the materials we tried didn’t work, but this gave us insights into what properties might be important.”

In the end, the scientists discovered that a coating material made from a combination of titanium oxide and germanium oxide dissipated the least energy (the equivalent of reducing thermal vibrations).

“We tailored the fabrication process to meet the stringent demands in optical quality and reduced thermal noise of the mirror coatings,” says Carmen Menoni, professor at Colorado State University and member of the LIGO Scientific Collaboration. Menoni and her colleagues at Colorado State used a method called ion beam sputtering to coat the mirrors. In this process, atoms of titanium and germanium are peeled away from a source, combined with oxygen, and then deposited onto the glass to create thin layers of atoms.

“This is a game changer for Advanced LIGO Plus,” says Reitze. “And this is a great example of how LIGO relies heavily on cutting-edge optics and materials science research and development. This is the biggest advance in precision optical coating development for LIGO in the past 20 years.”

The study, titled, “Low Mechanical Loss TiO2:GeO2 Coatings for Reduced Thermal Noise in Gravitational Wave Interferometers,” was funded by the NSF and the Gordon and Betty Moore Foundation.