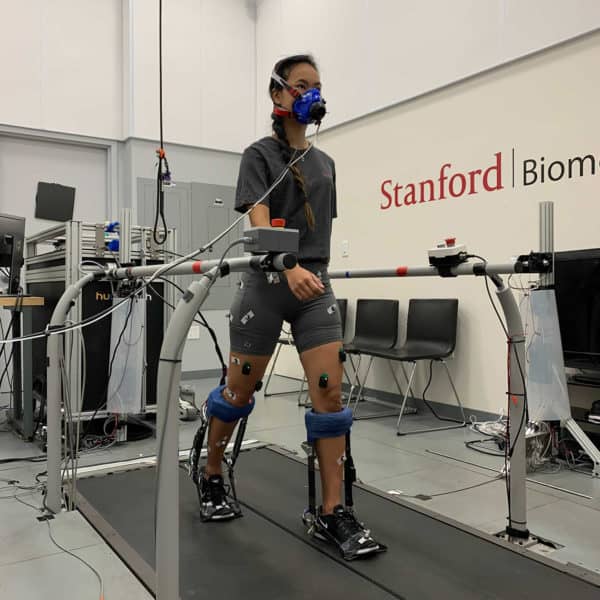 Exoskeleton devices work, researchers say, for a variety of uses such as speeding up our walking or making running easier. Yet they don’t know what exactly makes exoskeletons effective. What is the benefit of customization, for example? And how much does simply getting used to the exoskeleton matter? Researchers in the Stanford Biomechatronics Laboratory at Stanford University examined these questions and found that training plays a remarkably significant role in how well exoskeletons provide assistance.

“People are amazing at learning new tasks,” said Katherine Poggensee, PhD ’21, a former member of the Stanford Biomechatronics Laboratory. “And so with training alone – just giving people time to learn how to use the device on their own – they can get great benefits from our devices.”

To uncover the secrets of exoskeleton success, Poggensee and Steve Collins, associate professor of mechanical engineering and lead of the Biomechatronics Laboratory, monitored the progress of 15 people outfitted with an ankle exoskeleton emulator – a device that attaches into the shoe and around the shank of a person’s legs and mimics a powered exoskeleton, but allows for abundant customization and fine-tuning through special lab-based controllers.

These people had never used an exoskeleton before, but while they all benefited from training, different approaches yielded vastly different results. Participants who received the most advantageous training conditions expended nearly 40 percent less energy while walking with exoskeleton assistance compared to walking with the exoskeleton turned off. Across all participants, the researchers determined that training contributed about half of the overall benefit offered by the exoskeleton. The research is detailed in a paper published Sept. 29 in Science Robotics.

“The main message for our colleagues is: We need to up our experimental game. We need to really train people,” said Collins, who describes the exoskeleton experience as less like putting on a superhero’s smart armor and more like riding a bike. “Once you learn how to do it well, you can just put on the exoskeletons and start walking and it’s easy – but becoming expert does take a little while.”

Taking the time
The researchers focused on three main questions: Can we train people to use exoskeletons by just giving them a device and having them walk for a long time? Can we help people train faster if we expose them to a variety of exoskeleton behaviors? And, once people are fully trained, how does customized control of the exoskeleton affect performance?

Participants were put into three main groups, each of which experienced five days of training. One group received generic assistance from the exoskeleton emulator (based on what helped participants in the past), another experienced continuous optimization of the device to their specific needs throughout the study, and the third group experienced optimization that was reset each day. As expected, participants in the continuous optimization group saw the greatest drop in energy expenditure and, because they were exposed to some variety in exoskeleton behavior, attained those benefits more quickly.

“What we didn’t expect was how well people did,” said Poggensee.

The people in the most advantageous group – continuous optimization and exposure to moderate variety – were the ones who reduced their energy costs by almost 40 percent. (And many participants did not even perceive how much the exoskeleton was assisting until they returned to walking with it turned off.) By comparing all the tests, the researchers determined that training was responsible for about half this improvement and around one-quarter was due to customization. Poggensee emphasized that customization would likely be even more important for people who have mobility issues.

Another surprise was how long it took participants to become “experts,” which the researchers defined as the point at which their energy improvements plateaued. This took about two hours in the exoskeleton emulators, the equivalent of five miles worth of walking. That may not sound like long, but it is a substantial commitment for lab studies.

“Fortunately for the users of future products, we expect people to accumulate lots of exposure over the course of their first week with a device. So, it shouldn’t inhibit people or prevent people from becoming expert in that context,” said Collins, who is also a faculty affiliate of the Stanford Institute for Human-Centered Artificial Intelligence (HAI), which provided funding for this research. “But, if we really want to understand how people respond to some new device in the lab, we’ll need lengthy protocols.”

Better training
This research points to the value of better understanding training, including how people become accustomed to mobility devices and how training can be improved.

“A big takeaway for me is that we need to let our participants drive our research,” Poggensee said. “We need to give them the time to actually learn how to use the device, so that we don’t interfere with any of the learning.”

The team’s interest was also piqued by the fact that, even after participants qualified as experts, there were still slow improvements to their performance over tens of hours of training. To really get the most out of exoskeletons, researchers may need to study how people’s bodies themselves are adapting; for example, the way muscles strengthen to better take advantage of the device.

For now, Collins and his lab are looking at how to speed up the acquisition of expertise, including a collaboration with Stanford computer scientist Emma Brunskill. And he’s increasingly optimistic about the potential for exoskeletons to become a commonplace device in many peoples’ lives.

“Exoskeletons are coming,” said Collins. “They’re going to improve your life and, once you get used to them, you might not even notice.”

This research was funded by the National Science Foundation and the Stanford Human-Centered Artificial Intelligence Grant Program. Collins is also a member of Stanford Bio-X and the Wu Tsai Neurosciences Institute.