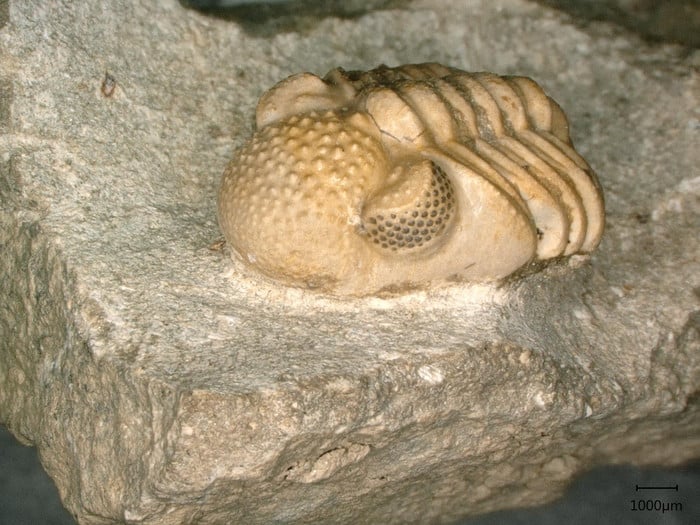 An international research team has found an eye system in trilobites of the suborder Phacopina from the Devonian (390 million years B.P.) that is unique in the animal kingdom: each of the about 200 lenses of a hyper-facet eye spans a group of six normal compound-eye-facets, forming a compound eye itself. In addition to the hyper-facetted eyes, the researchers, led by zoologist Dr. Brigitte Schoenemann at the University of Cologne’s Institute for Didactics of Biology, identified a structure that they believe to be a local neural network which directly processed the information from this special eye, and an optic nerve that carried information from the eye to the brain.

The article, ‘A 390 million-year-old hyper-compound eye in Devonian phacopid trilobites,’ has been published in Scientific Reports.

Trilobites are arthropods that once inhabited the world’s oceans and became extinct about 251 million years ago. The discovery was made when Schoenemann and her colleagues examined X-ray images taken by radiologist and amateur paleontologist Wilhelm Stürmer in the 1970s. Stürmer had already believed the filaments under the trilobite eyes to be nerves, or a light guiding system. Schoenemann also found markings by Stürmer on the images designating the six subfacets. However, scientists at the time did not believe his interpretations. Now, however, the re-examination of the images and verification with modern computed tomography succeeded in confirming his conjectures.

Most trilobites had compound eyes similar to those that are still found in insects today: a large number of hexagonal facets form the eye. There are usually eight photoreceptors under each facet. Comparable to the image of a computer screen, which is built up from individual pixels, an image is built up from the individual facets. In dragonflies, there are up to ten thousand individual facets. In order to produce a coherent image, the facets must be very close together and connected by neurons.

However, in the trilobite suborder Phacopinae, the externally visible lenses of the compound eyes are much larger, up to 1 mm in diameter and more. In addition, they are set farther apart. Until now, scientists had not been able to explain this because space is wasted where light could be captured. Since a small cup sits under the lens, they assumed that at the bottom of the capsule was a small retina comparable to that of humans.

Dr Schoenemann’s analysis of Wilhelm Stürmer’s 40-year-old X-ray archive now suggests a different interpretation: a hyper-compound eye. Each phacopid had two eyes, one on the left and one on the right. ‘Each of these eyes consisted of about 200 lenses up to 1 mm in size,’ said Schoenemann. ‘Under each of these lenses, in turn, at least 6 facets are set up, each of which together again makes up a small compound eye. So we have about 200 compound eyes (one under each lens) in one eye.’ These sub-facets are arranged in either one ring or two rings. ‘Underneath sat a foam-like nest that was probably a small neural network to process the signals,’ the zoologist added. The filaments Stürmer found in fact did turn out to be nerves leading from the eyes to the trilobite’s brain. Further examination with modern computer tomography confirmed these structures.

Wilhelm Stürmer was the head of the X-ray department at Siemens and an avid paleontologist. With a VW bus equipped as an X-ray station, he drove from quarry to quarry to X-ray fossils. Among other things, he discovered structures called filaments under the animals’ eyes, which he thought were fossils of soft tissues, especially optic nerves. ‘At that time, the consensus was that only bones and teeth, the hard parts of living things, could be seen in the fossils, but not the soft parts, such as intestines or nerves,’ Schoenemann explained. Stürmer’s heir gave the zoologist his archive. But the hobby-paleontologist had not only correctly identified the optic nerve, she notes: ‘On an X-ray negative, there was an arrow in red pen pointing to the structure of the six lower facets under a main lens. This probably indicated that Stürmer had already recognized the hyper-compound eye.’ At the time, however, scientists assumed that nerves did not fossilize, nor that light guides existed in natural optical system. Optical fibres were not discovered until the 1980s in the compound eyes of a deep-sea crab.

The trilobite’s ‘hyper-eye’ may have been an evolutionary adaptation to life in low light conditions, Schoenemann believes. With its highly complex visual apparatus, it may have have been much more sensitive to light than a normal trilobite eye. ‘It is also possible that the individual components of the eye performed different functions, enabling, for example, contrast enhancement or the perception of different colours,’ the biologist said. So far, such an eye has only been found in the trilobite suborder Phacopinae: ‘This is unique in the animal kingdom,’ she concluded. In the course of evolution, this eye system was not continued, since the trilobites of the suborder Phacopinae died out at the end of the Devonian period 360 million years ago.