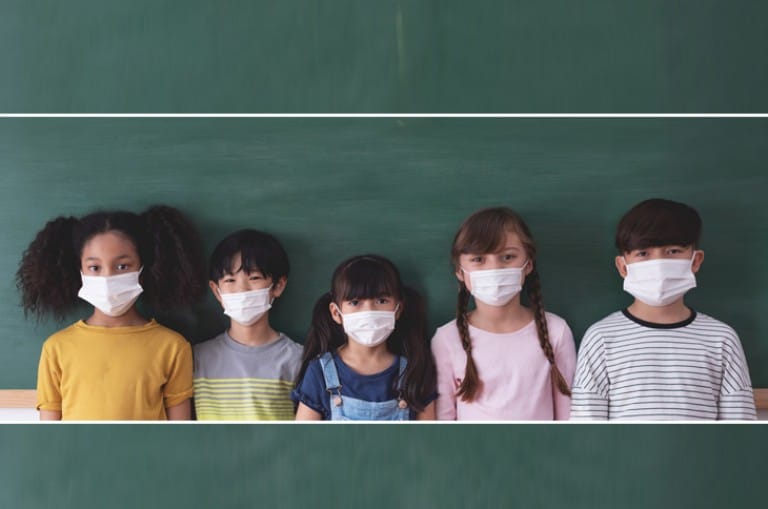 A masking mandate in North Carolina schools during the early weeks of the Delta variant surge resulted in a lower rate of infection among school children and staff members than what was reported in the broader community, according to a new report from the ABC Science Collaborative.

Publishing in the journal Pediatrics, the analysis includes data from 20 school districts in North Carolina that held summer school or year-round school between June 14, 2021, and Aug. 13, 2021. The Delta variant became the dominant strain of SARS-CoV-2 circulating in the United States in early July 2021.

Data were submitted from 783 K-12 schools, representing 59,561 students and 11,854 staff who attended in-person. The school districts in the analysis followed the North Carolina Department of Health and Human Services (NCDHHS) StrongSchoolsNC Toolkit, which recommended, but did not require, at least three feet of physical distancing between people. The state mask mandate for K-12 settings was in effect during the study period.

The ABC Science Collaborative analyzed COVID-19 data provided by the districts. Two measures were used to estimate the spread of the Delta variant within schools: A ratio showing community-acquired cases relative to those acquired in school and the estimated secondary attack, or school-acquired infection rate.

“The findings of this study are extremely encouraging for the health and safety of students and staff attending schools where universal masking is in place,” said Kanecia Zimmerman, MD, MPH, co-chair of the ABC Science Collaborative. “The Delta variant is more transmissible than previous ancestral variants, but transmission in schools can continue to be low with vaccination among those who are eligible, strict adherence to masking, and avoidance of pandemic fatigue.”

Though the study did not allow for a comparison to an unmasked setting because a statewide mask mandate was in place, data from other schools without a mask mandate during July-August 2021 showed these schools were 3.5 times more likely to have school-associated COVID-19 outbreaks than the schools in this study that required masking.

The data from this study also highlight the importance of remaining vigilant during times throughout the school day when strict mask adherence may not be possible.

“Looking forward to the fall and winter, lunch and extracurricular activities will be areas that require additional attention to limit the transmission of COVID-19 within schools,” said Danny Benjamin, MD, PhD, MPH, co-chair of the ABC Science Collaborative. “As pediatricians and public health experts, we encourage schools to put mitigation strategies in place, such as vaccination, masking, and eating outside, to protect students and staff.”

About The ABC Science Collaborative
The ABC Science Collaborative is an initiative that extends across 18 states, connecting scientists and physicians with school and community leaders to help understand the most current and relevant information about COVID-19. The program helps school leaders and state policymakers arrive at informed decisions about returning to school using data from their own communities. Our shared goal is to keep students, teachers, and their local communities healthy and safe. The ABC Science Collaborative is coordinated by the Duke Clinical Research Institute at the Duke University School of Medicine and is funded through grants from the National Center for Advancing Translational Sciences, the National Institutes of Health, and the Food and Drug Administration.