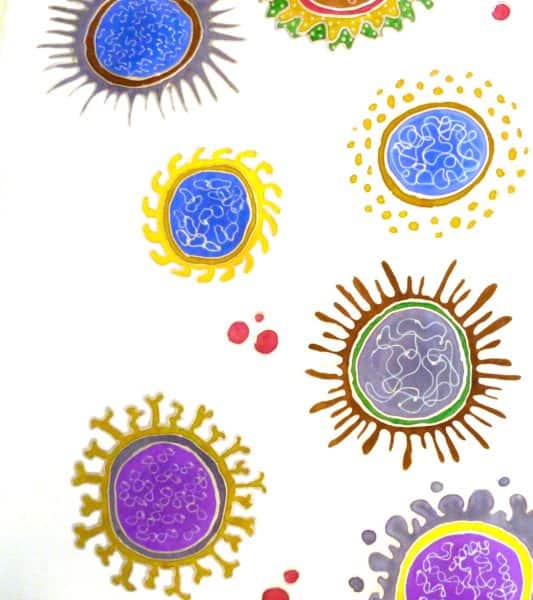 Headlines have warned that the winter of 2021 will be ‘a nightmare flu season’ – citing a drop in population immunity because of COVID lockdown restrictions.

But as well as driving down COVID rates, these restrictions have also driven influenza rates to an all-time global low.

So are we in for a bad flu season or a good one? Cambridge experts who have been studying flu for decades consider the scenarios that may lie ahead.

Once you’ve had flu, or been vaccinated against it, you can still get infected again. This is because the virus can mutate to change how it appears to the immune system.

In 2004 Julia Gog, Professor of Mathematical Biology in the Faculty of Mathematics, and colleagues published a paper in the journal Theoretical Population Biology in which they modelled the evolution – or antigenic variation – of flu each year in relation to epidemic size.

“To do this it needs to have lots of cases, so that there is enough opportunity to generate mutations,” she adds. “If it succeeds, it can then cause lots more cases. It’s almost like the lottery – to win you need to buy lots of tickets.”

Putting their 2004 results into today’s context suggests that COVID-19 might have actually driven flu into a downward spiral – reducing the overall number of flu cases so much that the chance of new variants being produced is also dramatically reduced.

“I’m not yet at all convinced by the arguments out there that 2021 is going to be a super bad year for influenza,” says Gog. And she has another theory about flu that’s an even greater cause for optimism. She thinks that recent COVID restrictions might have forced flu into a rut it may be stuck in for some time.

“Influenza probably isn’t free to mutate and evade our immunity without having to make some compensatory changes – and these could temporarily weaken it. So when there’s a lot of immunity, the virus could get stuck in this intermediate phase as it can’t generate enough cases to get going again, or at very least it will take several years before it gets lucky.”

Her 2008 paper in the journal Vaccine modelled this scenario, and raised the prospect of a time window in which there is potential to lock flu into its current state, pausing its evolution and so preventing infections. “This is very exciting as it gives us a window to vaccinate further and keep flu in a ‘locked’ state, to reduce transmission in future,” she says.

“Herd immunity is important in keeping the upper number of flu cases under control, and I think that will wane over time,” says Dr Laurence Tiley, Senior Lecturer in Molecular Virology in the University’s Department of Veterinary Medicine.

Herd immunity refers to the protection of the non-immune people in the population, as a result of the immunity of the majority of the population. If, say, 80% of people are immune to flu and 20% are still vulnerable, then those 20% are protected because the virus can’t spread through the population as a whole.

“We’re in such unusual circumstances that it’s extremely difficult to predict what the flu situation will be like this year,” says Tiley

“But I think there’s a realistic chance it will be very bad either this winter or next because of waning herd immunity,” he adds. “I think 2022 is more likely to be a problem year because the virus has more time to bounce back.”

Immunity due to infection or vaccination against flu wanes over time.  Initially the level of immunity can be high enough to prevent reinfection. However, as this immunity wanes (and antibody levels diminish), it becomes quite likely that you can be re-infected, even by exactly the same strain that you may have been vaccinated against previously.

“In a ‘normal’ year, reinfection with the same strain of flu would helpfully top up your immunity. But in the past two years there has been a lot less of this topping up going on because of COVID lockdowns and social distancing, so I think immunity will have waned in more people and to a greater degree,” says Tiley.

“We expect that the severity of flu caused by reinfection would be low – your secondary immune response kicks in quickly to prevent you becoming appreciably sick, unless of course the virus has evolved significantly in the meantime,” he says. “Nevertheless, by that stage the virus will have replicated in your respiratory tract to a level where it can be successfully passed on to someone else.”

“This allows the virus to spread through the community, and so herd immunity will have been negated. That puts vulnerable people particularly at risk, especially if we abandon all barrier measures – such as mask wearing and hand sanitation – for staff and visitors to care homes.”

In the UK, flu is a seasonal disease that arrives in winter and almost disappears completely in summer. But in other parts of the world flu never goes away.

“In some equatorial areas and regions of South East Asia, flu is circulating more or less continuously,” says Tiley. “Those populations have quite a high level of immunity against whatever the prevailing strains are. There is continuous pressure for the virus to evolve variants that can establish themselves, and these variants are periodically seeded back into other parts of the world through international travel.”

“You have to know what’s around, but because flu has recently been at an all-time low, paradoxically it could make it harder to decide which strain to vaccinate against,” says Tiley.

This means it’s possible that the vaccine might not be very effective this year – leaving the vulnerable groups unprotected.

“If that happens, it won’t be the first time,” he says, “but this year we have the added challenge of co-infection with COVID – which I think there’ll be a lot of if flu manages to come back.” There is evidence that being infected with flu will make COVID symptoms worse, when people catch both together.

In the longer term though, flu vaccination technology could actually benefit from COVID. The system currently in use is based on a relatively old technology – it involves being injected with an inactivated version of the virus. The result is a narrowly effective vaccine that takes years to update. “The technology works, but only just – we’re constantly playing catch-up,” says Gog.

New vaccine technology was explored in the race for a COVID-19 vaccine, and the resulting Pfizer-BioNTech jab is what’s known as an ‘RNA vaccine’. This approach – which has been studied for decades – delivers a specific protein to the body, enabling the immune system to mount a defence to the virus.

“We are very excited about RNA vaccines – not just because of what this technology can do for COVID. What it can do for other infectious diseases is mind-blowing,” says Gog. “It opens up a lot of exciting options for moving on from our current cycle of influenza strain selection.”

The measures we’ve taken against COVID – like social distancing, hand-washing and mask-wearing – have also been very effective against flu. Tiley thinks they could act as a positive counterbalance to help prevent a flu epidemic this year. “We’ve pushed the flu incidence down to record lows; if we’d pushed a bit harder maybe we could have got rid of it altogether,” says Tiley, adding, “I don’t think we should be quite so keen to relinquish all these changes.”

He hopes that mask-wearing will continue where people are more vulnerable, such as in care homes. “If a fit, healthy person gets flu, they’ll feel awful for a week but it probably won’t kill them. But there’s a good chance that it will be deadly to an 80-year old in a care home.”

There’s something else that might have changed flu’s ability to infect people since COVID arrived: our change in attitude towards infectious disease.

“We’ve accepted for years that getting colds and flu in the winter is part of life. But I wonder, post-COVID, is our attitude the same?” asks Gog.

“If someone turns up to a busy office with a honking cold, I don’t think we’re going to put up with that in the same way we used to,” says Gog.

Simone Schnall, Professor of Experimental Social Psychology in the Department of Psychology, agrees. She says there’s a lot of research suggesting that people often simply copy what others do.

“When in doubt, there’s a good chance that what others are doing is a reasonable course of action for you as well,” says Schnall. “The majority of people have been wearing masks for a long time now, so it’s commonplace. Mask-wearers no longer stand out in a way that would have been the case pre-pandemic.”

“If anything, wearing a mask has become a sign of caring about not only your own health, but also the health of other people,” says Schnall.

“So I think people will continue wearing masks, and if that’s the case presumably this will bring down infections of flu and colds significantly,” she adds. “For the same reasons, it’s also likely that potentially exposing others to infectious disease will be frowned upon more than used to be the case.”

Gog suggests that the experience of COVID-19 might also make us more diligent about getting flu jabs, and that perhaps younger age groups will be included in annual vaccination programmes too. “I don’t think flu is as robust and inevitable as people believe. I think fairly modest behavioural change might bring seasonal flu down quite a lot,” she says.

Flu is something we’ve been living with for a long time. It’s a significant economic and health burden: with the exception of the last two years there’s been a flu epidemic every single year in the UK.

There is an additional challenge this year in the distribution of flu vaccines – transportation issues linked with Brexit are already causing delays in supply. And if flu does come back with a force this winter it will put even more pressure on an already stretched NHS.

Gog says: “While there’s lots of reason to be optimistic, we can take nothing for granted with influenza. And importantly, this is a global story in terms of what we will see with influenza evolution. But I certainly think we should challenge the thinking behind some of the sweeping predictions of doom for this winter.”

Professor Julia Gog OBE, Professor of Mathematical Biology in Faculty of Mathematics. A specialist in mathematical and theoretical biology and study of infectious diseases, particularly flu and coronavirus. In 2020 she served on the Scientific Advisory Group for Emergencies (SAGE), advising UK Government on the response to the COVID-19 pandemic.

Dr Laurence Tiley, Senior Lecturer in Molecular Virology in the University’s Department of Veterinary Medicine. In collaboration with Imperial College London he is exploring a novel, unconventional vaccine strategy applicable to  a variety of different viruses, which if successful has the potential to be a complete game-changer. The current goal is to develop a ‘universal flu vaccine’ that works against multiple types of influenza virus, to protect against rapidly emerging and unanticipated epidemic and pandemic strains of this virus.

Professor Simone Schnall, Professor of Experimental Social Psychology in the Department of Psychology aims to understand human social cognition and behaviour, in particular how people make judgements and decisions about others. In the COVID-19 context she has been interested in health-related behaviour change, including through the development of the University’s messaging posters, and methods to increase student participation in the asymptomatic testing scheme.