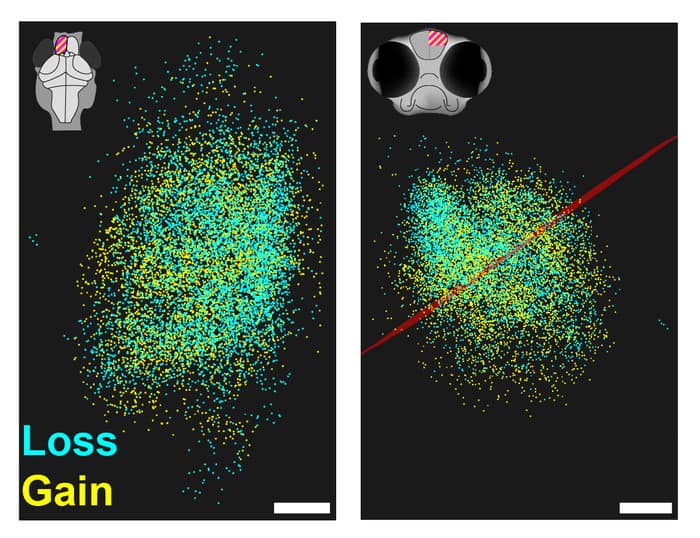 What physical changes occur in the brain when a memory is made?

A team of researchers at the University of Southern California has, for the first time, answered this question by inducing a memory in a larval zebrafish and then mapping changes in their transparent heads with brain cells lit up like Times Square on New Year’s Eve.

After six years of research, they made the groundbreaking discovery that learning causes synapses, the connections between neurons, to proliferate in some areas and disappear in others rather than merely changing their strength, as commonly thought. These changes in synapses may help explain how memories are formed and why certain kinds of memories are stronger than others.

The study was published in the Proceedings of the National Academy of Sciences and was led by USC’s Don Arnold, Scott E. Fraser and Carl Kesselman.

The study was made possible thanks to a new type of cell labeling and a custom-made microscope invented at USC. The researchers also developed a cutting-edge way to track and archive the data collected to make their findings as accessible and reproducible as possible.

Prior to their work, it was not possible to determine the location of a synapse in a living brain without modifying its structure and function, making comparisons before and after memory formation unfeasible.

Through a multidisciplinary collaboration between the USC Viterbi School of Engineering and the USC Dornsife College of Letters, Arts and Sciences, the teams were able to determine for the first time the strength and location of synapses before and after learning in the brain of a living zebrafish, an animal commonly used to study brain function. Zebrafish are large enough to have brains that function like our own, but small and transparent enough to offer a window into the living brain. By keeping the intact fish alive, they were able to compare synapses in the same brain over time, a breakthrough in the neuroscience field.

In order to create memories to measure, the research team had to come up with new methods to induce a larval zebrafish to learn. They did this by training the 12-day-old fish to associate a light turning on with being heated on the head with an infrared laser, an action they sought to avoid by attempting to swim away. Fish that learned to associate the light with the impending laser would flick their tails, indicating that they had learned. Five hours of training later, the team was able to observe and capture significant changes in these zebrafish brains.

In addition to creating this new approach, Arnold, a USC Dornsife neuroscientist and professor of biological sciences and biomedical engineering, led a team that created new methods for altering the DNA of the fish so the strength and location of a synapse would be marked with a fluorescent protein that glows when scanned by a laser.

“Our probes can label synapses in a living brain without altering their structure or function, which was not possible with previous tools,” Arnold said.

This made it possible for the specialized microscope developed by Fraser’s team to scan the brain and image where the synapses were located.

“The microscope that we built was tailored to solve this imaging challenge and extract the knowledge we needed,” said Fraser, a Provost Professor of Biological Sciences and Biomedical Engineering at the USC Michelson Center for Convergent Bioscience, with appointments in USC Viterbi, USC Dornsife, and the Keck School of Medicine of USC. “Sometimes, you try to get such a spectacular image that you kill what you are looking at. For this experiment, we had to find the right balance between getting an image that was good enough to get answers, but not so spectacular that we would kill the fish with photons.”

With this innovative microscope they were able to observe changes in living animals and get before and after pictures of the changes on the same specimen. Previously, because experiments were conducted on deceased specimens, they could only compare two different brains, one conditioned, one not.

“This is ninja imaging, we sneak in without being noticed,” Fraser said.

The result was hundreds of images and experiments that had to be processed and analyzed. A third group, led by Kesselman — a computer scientist at the USC Michelson Center for Convergent Bioscience and William H. Keck Professor of Engineering at USC Viterbi — developed innovative new algorithms that made this possible while keeping track of the large and complex experiments that were performed over the duration of the investigation.

The main takeaway when analyzing those images: Rather than the memory causing the strength of existing synapses to change, the synapses in one part of the brain were destroyed and completely new synapses were created in a different region of the brain.

“For the last 40 years the common wisdom was that you learn by changing the strength of the synapses,” said Kesselman, who also serves as director of the Informatics Division at the USC Information Sciences Institute and is a professor with the Daniel J. Epstein Department of Industrial and Systems Engineering, “but that’s not what we found in this case.”

“This was the best possible outcome we could have had,” said Arnold, “because we saw this dramatic change in the number of synapses — some disappearing, some forming, and we saw it in a very distinct part of the brain. The dogma was that the synapses change their strength. But I was surprised to see a push-pull phenomenon, and that we didn’t see a change in synapses’ strengths.”

The results suggest that changes in the number of synapses encode memories in the experiment, and may help to explain why negative associative memories, such as those associated with PTSD, are so robust.

“It has been thought that memory formation mainly involves remodeling of existing synaptic connections,” said Arnold, “whereas in this study, we found the formation and elimination of synapses, but we saw only small, random changes in synaptic strength of existing synapses. This may be because this study concentrated on associative memories, which are much more robust than other memories and are formed in a different place in the brain, the amygdala, versus the hippocampus for most other memories. This may someday have relevance for PTSD, which is thought to be mediated by the formation of associative memories.”

An unusual aspect of the paper and the associated study was its focus on how to make the results of the investigation as transparent and reproducible as possible, making every piece of data associated with the paper searchable and available to any scientist at a publicly available website, Mapping the Dynamic Synaptome (http://synapse.isrd.isi.edu). Accessibility of all data and code is essential for reproducing scientific results, yet access to all of the data that went into producing a paper is rarely accomplished. For example, recent studies have shown that only 20% of cancer research is reproducible because the data is not available.

“The USC team has set a new bar for data access in that every piece of data generated during the six-year investigation was captured and organized for this research,” said Kesselman, who engineered this new paradigm. “We have addressed this problem from the beginning by creating a comprehensive system designed for data sharing and data analyzing. It was useful while doing our experiments because the teams could access the data at all times, and it will guide those who want to use our work in the future.”

“I truly believe that this is the future of transparency in research, a new era, and USC is ahead of the curve,” Fraser said.

The ongoing study represents the latest cross-disciplinary collaboration at USC with researchers at the USC Michelson Center for Convergent Bioscience, Dornsife, Viterbi and the Keck School of Medicine at USC. Launched in 2016, the center has brought together a diverse network of premier scientists and engineers under one roof, thanks to a generous $50 million gift from orthopedic spinal surgeon, inventor and philanthropist Gary K. Michelson, and his wife, Alya Michelson.