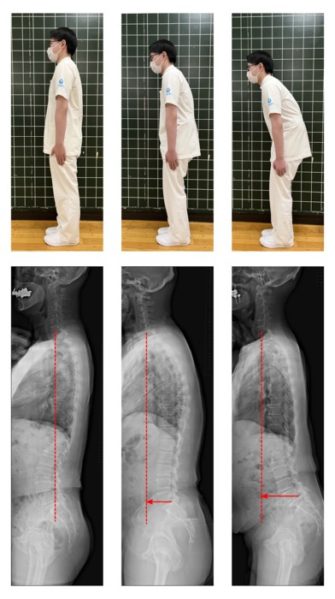 The spinal column posture evaluated by the examination. The left shows the posture in which the anterior-posterior balance of the spinal column is balanced, and the center and the right are the upper body protruding forward with respect to the pelvis and the center of gravity forward. As we get older, the center of gravity tends to move forward. By evaluating this, it is possible to detect a slight decline in cognitive function.

A mass survey of citizens aged 50 to 89 years examined whether cognitive decline could be detected by sagittal spinal balance measurement based on a radiological approach. Doctors from Shinshu University observed associations of sagittal vertical axis (SVA) anteriorization and higher age with lower cognitive function. The sagittal vertical axis is the length of a horizontal line connecting the posterior superior sacral end plate to a vertical plumbline dropped from the centroid of the C7 vertebral body (Photo 1). The more the head and neck protrude in front of the pelvis when viewed from the side, (the greater the length) the more likely subjects are to show symptoms of mild cognitive decline. In males, the SVA was associated with cognitive decline independently of age. In females, cognitive decline was more likely in cases of SVA that is equal or greater than 70mm regardless of age.

Mild cognitive impairment is cognitive complaints from the individual or associates and no dementia. Dementia, frail, and bedridden status maybe prevented by catching mild cognitive impairment at a reversible stage in communities where expensive special testing equipment or additional medical testing time is limited for the older population. First author Hikaru Nishimura is an occupational therapist that research problems faced by the elderly from a rehabilitation perspective. Exercise training in older adults could prolong the extent of decline towards dementia or prevent it all together.

The prefecture of Nagano boasts some of the highest health longevity in Japan. With this study and others, doctors hope to prevent future need for care through rehabilitation interventions for frail found during screenings.

This work was supported by a grant from the Japan Orthopaedics and Traumatology Research Foundation, Inc. [no. 339], Shinshu Public Utility Foundation for Promotion of Medical Sciences, Research Funding from the Japanese Society for Musculoskeletal Medicine, the Promotion Project of Education, Research, and Medical Care from Shinshu University Hospital, and The Nakatomi Foundation. None of the above funding sources had any role in the design, execution, analysis, interpretation of data, or writing of the study.