In the latest issue of Science, researchers from Lund University in Sweden have shown how nanowires could pave the way for more efficient and cheaper solar cells.

“Our findings are the first to show that it really is possible to use nanowires to manufacture solar cells”, says Magnus Borgström, a researcher in semiconductor physics and the principal author. Research on solar cell nanowires is on the rise globally. Until now the unattained dream figure was ten per cent efficiency – but now Dr Borgström and his colleagues are able to report an efficiency of 13.8 per cent. 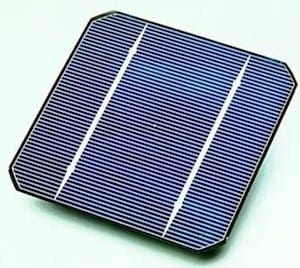 The nanowires are made of the semiconductor material indium phosphide and work like antennae that absorb sunlight and generate power. The nanowires are assembled on surfaces of one square millimetre that each house four million nanowires. A nanowire solar cell can produce an effect per active surface unit several times greater than today’s silicon cells.

Nanowire solar cells have not yet made it beyond the laboratory, but the plan is that the technology could be used in large solar power plants in sunny regions such as the south-western USA, southern Spain and Africa.

The Lund researchers have now managed to identify the ideal diameter of the nanowires and how to synthesise them. “The right size is essential for the nanowires to absorb as many photons as possible. If they are just a few tenths of a nanometre too small their function is significantly impaired”, explains Magnus Borgström.

The silicon solar cells that are used to supply electricity for domestic use are relatively cheap, but inefficient because they are only able to utilise a limited part of the effect of the sunlight. The reason is that one single material can only absorb part of the spectrum of the light.

Research carried out alongside that on nanowire technology therefore aims to combine different types of semiconductor material to make efficient use of a broader part of the solar spectrum. The disadvantage of this is that they become extremely expensive and can therefore only be used in niche contexts, such as on satellites and military planes.

However, this is not the case with nanowires. Because of their small dimensions, the same sort of material combinations can be created with much less effort, which offers higher efficiency at a low cost. The process is also less complicated. In the Science article, the researchers have shown that the nanowires can generate power at the same level as a thin film of the same material, even if they only cover around 10 per cent of the surface rather than 100 per cent.

The research has been carried out as part of an EU-funded project, AMON-RA, coordinated by Knut Deppert, Professor of Physics at Lund University (www.amonra.eu).

“As the coordinator of the project, I am very proud of such a great result – it has well exceeded our expectations. We will of course continue the research on nanowire solar cells and hope to achieve an even higher level of efficiency than the 13.8 per cent that we have now reported”, says Knut Deppert.